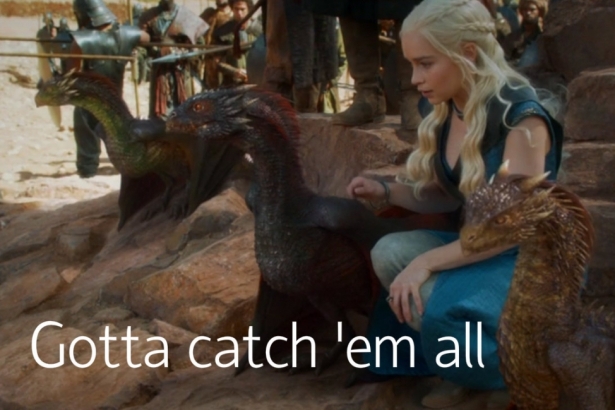 Team Dragon Mama makes moves in 'Game of Thrones' S03E10. Check out the recap and review right here. Spoiler alert, by the way.

Welcome back, Dire Wolf fans! Here you’ll find the recap and review for “Game of Thrones” S03E10, titled “Mhysa". This is it, the Season 3 finale, and what a season it’s been.

One presumes Jon Snow is hauling ass toward Castle Black, where he will warn of an imminent wildling attack. He’ll also surely tell his fellow Crows, “There’s a ginger woman who questions my ability to retain basic information. Don’t hurt her.”

So what can we expect in S03E10? Both previous GoT seasons had action-oriented penultimate episodes, chased by finales which focused on revelations (S01E10: Daenerys is the Dragon Mama; S02E10: White Walkers are walkin'). As always, major spoiler alert.

First, though, a moment of silence for Robb Stark, who followed in his father’s footsteps regarding short-sighted decisions with fatal consequences.

Okay, let’s get into it.

2/10, would not attend wedding again

At The Twins, “The Wedding Planner II: The Revenge” is wrapping production. Roose Bolton looks down from a parapet to see the Stark bannermen getting stabbed, burned, and otherwise killed. 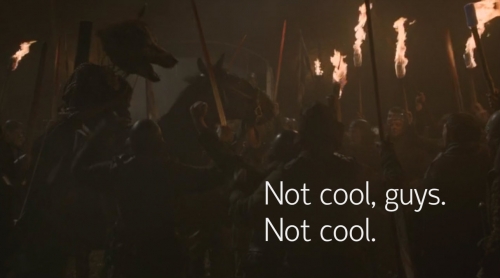 Sandor "The Hound" Cleganne grabs a Stark Dire-Wolf banner (because they'll be worth a fortune on eBay) and rides off into the night with a horrified Arya Stark.

Arya isn't the only one keeping a shit-list... Tyrion Lannister keeps one as well, populated by those who laugh at him. He points out to his tween bride Sansa Stark that he doesn't plan on killing those who dis him: "Do I look like Joffrey to you?" Sansa tells him to turn the other cheek ( the one without the badass scar?), but Tyrion points out that he's been called names his whole life.

I dunno, "Demon Monkey" is an awesome nickname, though "half-man" and "imp" have mostly derogatory connotations. Shae is walking behind them as they discuss Tyrion's well-documented perversions, and she looks about as happy as you'd expect.

Sansa's revenge plan is pretty cool: "sheep-shifting" is when you cut a hole in the victim's mattress and stuff it full of sheep poop. I misheard it as "sheep-shitting", but apparently Sansa thinks that "shift" is the swear-word version of "dung", so, yeah. 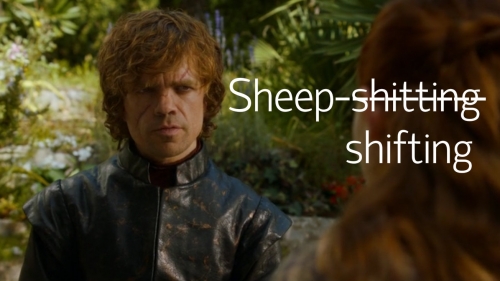 Sansa learned about sheep-shifting the hard way, at the hands of Arya when they were younger and their lives didn't completely suck. As revenge goes, it's not quite Emily Thorne-caliber, but come on, it ain't bad. Tyrion and Sansa are actually an endearing team. Too bad his dad just orchestrated the wholesale slaughter of Sansa's family.

So, yeah, sheep-shifting: now you know.

Pod passes a gaggle of giggling girls and summons Tyrion to a Small Council meeting. I bet they're gonna discuss the new espresso machine, the kind that uses those tiny plastic tubs.

Let the audience watch, it ain't a thang

Joffrey looks waaaay too happy to be at a meeting, so clearly he's heard about the Red Wedding. Or maybe he's just seen all the reaction videos on YouTube.

Tyrion reads the coded message confirming that the end of S03E09 wasn't just a bad dream. Joffrey wants to serve Robb's head to Sansa at his wedding feast. What a dick. 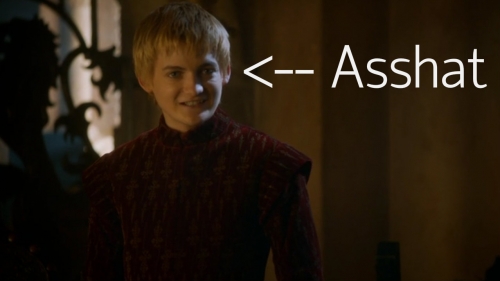 Joffrey immediately throws his weight around, as is his habit whenever advantage comes his way through no effort of his own. Tyrion lays down the Imp Hand, though: "Monsters are dangerous, and just now kings are dying like flies."