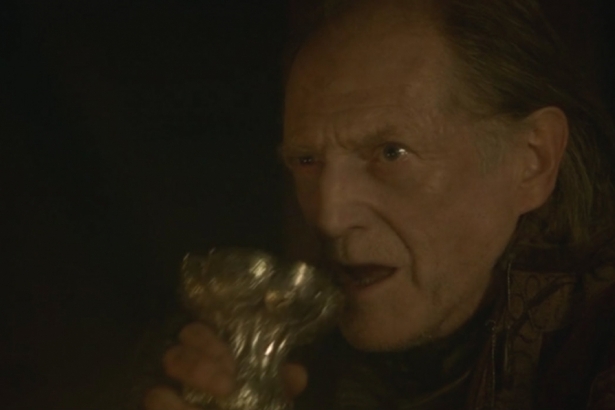 Game of Thrones S03E09: There's always 'that guy' at every wedding.

Game of Thrones S03E09 recap & review: 'The Rains of Castamere'

Welcome back, Dire Wolf fans! After a seemingly-interminable two weeks, we're back with "Game of Thrones" S03E09, titled "The Rains of Castamere". The song has been played a few times in episodes past, and the story itself finally recounted by Cersei last time just before the most heinous wedding on record.

Tyrion Lannister is once again a married man, and will be waking up with a hangover visible from space. Just as Jaime Lannister and Brienne of Tarth must be wary of further ursine interference, so must you beware of major, major spoilers. Okay, let's get into it.

Robb and Catelyn Stark are looking at their Lions-vs-Dire-Wolves chessboard, trying to plan the attack on Casterly Rock. I see there's still a piece depicting the Karstarks (Looks like the X where Theon's been spending time lately, no?). Anyway, Robb's master plan is to unseat the Lannisters from Casterly Rock, sacking their city and robbing Tywin Lannister of his power. Robb is also apologizing to his mom for arresting her, and for not listening to her. He's asking her advice. It must really hurt, but it's hard to tell, since Robb Stark always looks kind of like this: (ò_ó).

Will an attack on Casterly Rock work? If Team Stark has enough troops. In other words, if Walder Frey (famous for being an asshole) comes across after his daughter Roslin marries Edmure Tully.  A lot of ifs in that plan. If only they could bring in consultants.... 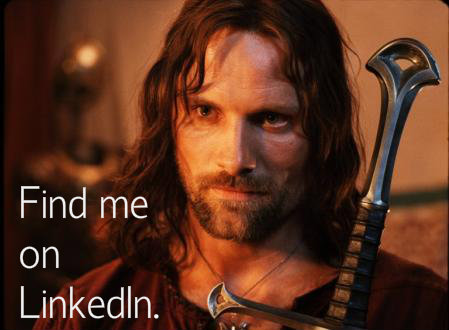 Catelyn says fukkit, let's bring the pain: "Show them how it feels to lose what they love."

That Ass and Dat Ass

A Dire Wolf (a Dire Wolf!) leads Team Stark to The Twins, those two castles straddling the river, guarding the bridge that Robb was supposed to be married off to gain access to. Walder Frey welcomes them with what looks like some horrible gruel. We just may have found another kitchen that Gordon Ramsay cannot fix. 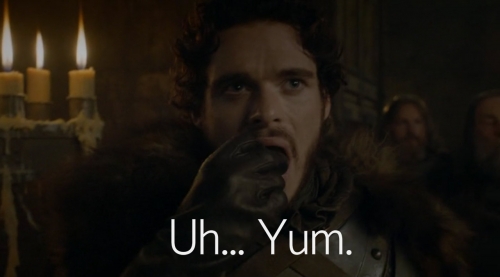 Say what you want about Walder, he name-checks people. He rattles off the names of his downcast daughters and morose granddaughters. Wait, hang on, he screwed up the eleventh one's name. Whatever she's called, it's not "Wertha" Or "Waldina" Or "Werrina." She pipes up, "Mary." He's like, "Fine." One of the girls is visibly pregnant.

Come to think of it, Walder either messed up two other names, or he named two of his kids "Walda". Just... wow. There's a twelfth, but she's too young even for Craster. Walder doesn't introduce his own wife, who looks to be about 16. Maybe he doesn't remember her name.

Robb sacks up, though, and eloquently apologizes to all of the young ladies, explaining that he broke his vow to marry one of them (to have been determined by a reality show, I guess) in order to tap... Dat Ass.

I shit you not, Walder responds with the slow clap. He asks to inspect Dat Ass, leering at Talisa Magyr as she approaches. Something about the way Walder Frey says, "Mmmm, very pretty" just creeps me the hell out. "I can always see what's going on beneath a dress" does so even more. 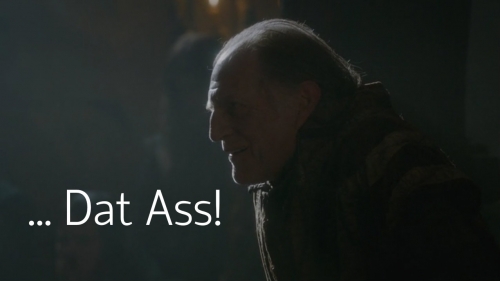 Walder seems determined to wind Robb up, leering, "I bet he betrayed me for firm tits and a tight fit." Hey, dickhead, only we get to comment on Talisa's physique. Seriously, stop eye-banging her. It's uncouth.

Walder stands up and declares, "The wine will flow red, the music will play loud, and we'll put this mess behind us." Cheer up, Tyrion, I bet we'll be looking back at your own wedding and sighing, "If only."

Lay out blueprint plans on you

Team Dragon Mama! Daenerys Targaryen, Jorah Mormont, Berristan Selmy, Grey Worm, and Daario the Lothario are poring over the plans to Yunkai. Daario shows Daenerys the back gate (I bet he would!), moving her hand with his own. The look on Jorah's face is priceless.