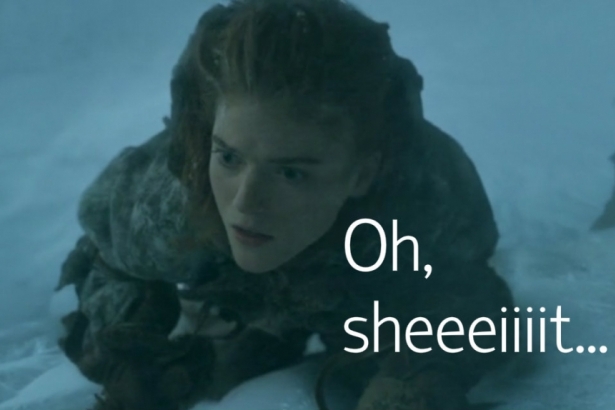 Game of Thrones S03E06: The least safe episode yet.

Welcome back, Dire Wolf fans! This is the recap and review for "Game of Thrones" S03E06, titled "The Climb". Major spoiler alert, obviously, as well as several personal-safety advisories.

Hopefully this week's episode gets its title from the fact that Jaime Lannister is finally about to get up on it with Brienne of Tarth, but let's just watch and find out.

"You've got too much wood in there." Gilly is talking to Samwell Tarly, but, sadly for him, she's talking about the campfire. Hang in there, mate. The Friend Zone can be even worse than the frozen wastes above The Wall.

Sam is showing off a spearhead he found up in the Fist of the First Men (presumably before his unit was decimated by the shambling undead). Gilly doesn't know what it does. Sam, I may not be an expert in Westeros weaponry, but I recommend not storing your speartip with its point facing your own guts.

Gilly thinks Samwell is "highborn" because he grew up with servants in a warmer climate. Well, I guess he is kinda highborn. Sam is really selling The Wall as a tourist attraction. He's overreaching, though, by selling Castle Black as anything other than a frigid, depressing sausage party. Wait, hang on, Samwell is singing! Okay, Sam wouldn't win "American Idol", but he's better than Ian Brown. Look, I'm a huge Stone Roses fan, but someone's gotta say it.

I'm floating in the most peculiar way

Osha and Meera are at each other's throats, as per usual. They're skinning rabbits for breakfast whilst threatening one another with grievous bodily harm. Bran Stark is like, "STFU, FFS!" Hodor is like, "Hodor!" 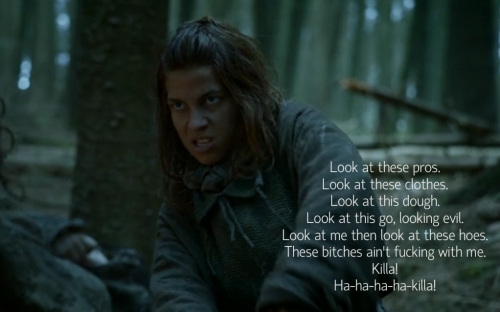 Teenage David Bowie is having some sort of siezure in his sleep: being a Warg has its downsides. Meera puts a leather belt in his mouth by way of ground-control-to-Major-Tom. He wakes up and says, "I saw Jon Snow." He saw Jon north of The Wall...

... And so do we. Jon is indeed surrounded by enemies, but only because he's in Michael Westen mode. Ygritte asks if he's afraid, and he says "Yes". Well, yeah, have you seen the wildlings' ice climbing equipment? I'd be freakin' terrified. Ygritte has wanted to look down from The Wall her whole life. Funny: the Night's Watch are there because there's nothing else for them in the Seven Kingdoms, whereas the wildlings would give anything to reach the top of The Wall. The grass is always greener, etc. Or the snow is always colder. Or the zombies are always hungrier.

Ygritte is reminiscing how he made her twist an' shout... but she also lets Jon know that she knows he's no traitor to The Crows. He's like, O_o. Ygritte says, "I'm yer woman now, Jon Snow, and yer going to be loyal to yer woman." She knows she's expendable to Mance Rayder, just as he's expendable to the Night's Watch. However, they can watch each other's backs and get out of this alive. 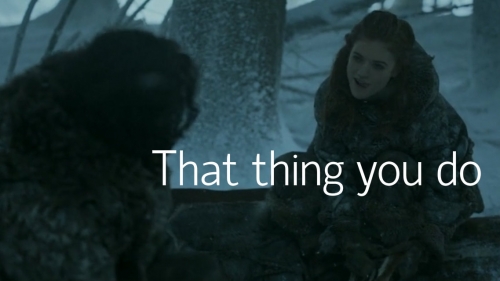 Ygritte's proposition is clear: "It's you an' me that matters to me an' you. Don't ever betray me." Jon answers, "I won't." Ygritte says, "Good, 'cause I'll coot yer pretty cock right off an' wear it 'round me neck!"

Don't betray her, Jon, because we know that people cut other people's appendages off in "Game of Thrones", and said appendages get worn 'round necks. I'm really not ready to see an episode open with Jon's Johnson hanging on a string. Yikes.

Lift up the reciever, I'll make you a believer

Arya Stark is reciting the names on her hit list, punctuating each one with an arrow to a straw dummy's vitals. She's getting some archery coaching from the Minstrels without Borders. Well, from Anguy the Archer, anyway: I don't think Thoros is any condition to handle a bow. 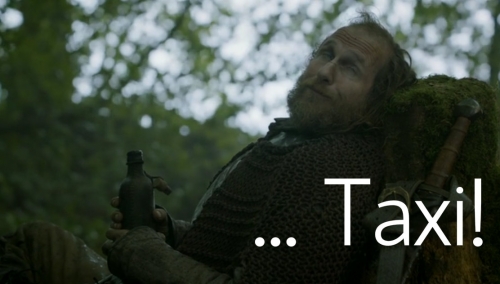 Wait, who's that approaching behind the dummy? It's Melisandre! She and Thoros know each other. I was wondering about that. Arya doesn't like the look of Melisandre. I mean, I see where she's coming from, but still, I'd--- wait, what? Oh. Moving right along.