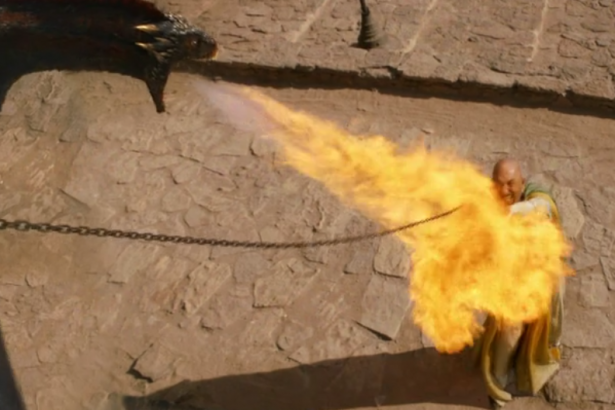 Spoiler alert! 'Game of Thrones' S03E04 features violence, fire, double-crossing, and other things we love about this show.

Welcome back, Dire Wolf fans! Here you'll find the recap and review for "Game of Thrones" S03 E04, "And Now His Watch is Ended". Spoiler alert, obviously, but also a mud alert. And an insane-cruelty alert.

Last we left Jaime Lannister and Brienne of Tarth, Jaime was deprived of his kingslaying hand:

Separated from his sister/girlfriend for, what, over a year now, he's gonna have to re-learn how to... well, you know. Anyway, let's get into it.

The scourging of Jaime Lannister

Look, it's Jaime Lannister's right hand! It's... oh, it's hanging around Jaime's neck. Jaime himself is the very picture of misery, which makes a certain amount of sense, seeing how he's wearing his own rotting hand on a rope around his neck. Brienne of Tarth is just staring at Jaime. I can't even come up with anything snarky for this look. Holy sheeit. 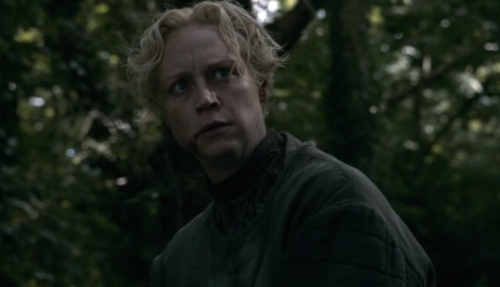 Turns out that this cohort knows that Jaime and Cersei Lannister have been banging. Ooh, pushing Bran Stark out of that window was pointless, then, wasn't it?

Locke and the Stark loyalists are obviously fans of "The Passion of the Christ", making Jaime's suffering as heinous as possible. He's about to fall from his horse? Let him fall in the mud. He's thirsty? Have him drink horse piss.

Jaime has other plans, heisting a sword to take on his captors left-handed. Jaime Lannister is not Inigo Montoya, though, so his left-hand game isn't too hot. Brienne hops down, hands out a few more concussions, and tries to help her action-comedy partner; but to no avail.

To be honest, I'm not sure if Jaime isn't actually trying to get himself killed.

Tyrion Lannister visits Varys the Spider to find out who tried to have him killed during the Battle of the Blackwater. Varys is like, "Did I ever tell you how I lost my jank?" Tyrion's all, "Uh... no." Varys is like, "Well, I'll tell you."

Since this is "Game of Thrones", the Spider's story is pretty awful. Varys was traded to a sorceror as a young boy and, well, imagine all the horror stories you hear about the Boy Scouts, then multiply them by all the horror stories you hear about Catholic priests. What happened to Varys was worse than that. He was drugged and castrated by the sorceror, who threw Varys' tackle in a fire as part of a spell. Varys could feel everything, but couldn't speak or move.

That's why Varys hates magic, in case you were wondering.

The Spider bided his time: he worked as a rent boy, a thief, and so on. Now here he is, kickin' it in the Small Council Chamber, where he has amassed enough power and influence in Westeros to reach out and crush someone. To demonstrate, Varys opens a crate that's sitting in the middle of his living room. Both Tyrion and I are thinking, "Oh, no. This is going to be something horrible, isn't it? Like, the sorceror's embalmed head, or his balls skewered on a skewer?" 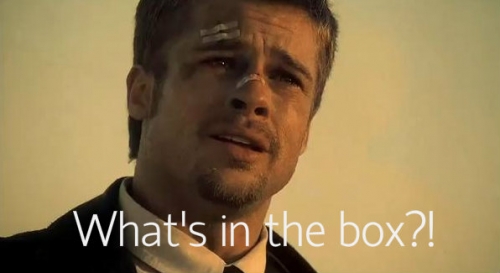 No! It's the sorceror himself! Varys has been keeping this guy alive and imprisoned in that box for hell-knows-how-long. Emily Thorne has nothing on Varys the Spider, who smirks, "Hello, my old friend. It's been a long time." 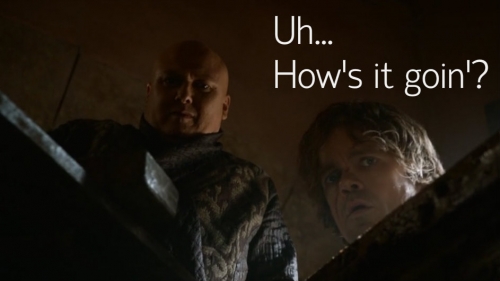 Varys' point is pretty clear: Revenge is a dish that can sometimes only be served cold: "I have no doubt the revenge you want will be yours in time... if you have the stomach for it."

Up at Kamp Kreepy, the Night's Watch rangers are cleaning up the literal pigsty that is Craster's homestead. Morale is in the toilet. The rangers are doubting Jeor Mormont's leadership (his crappy motivational speeches can't be helping), and they don't trust Craster to help them in any way. Why don't they just feed Craster to the pigs, Al Swearengen-style?