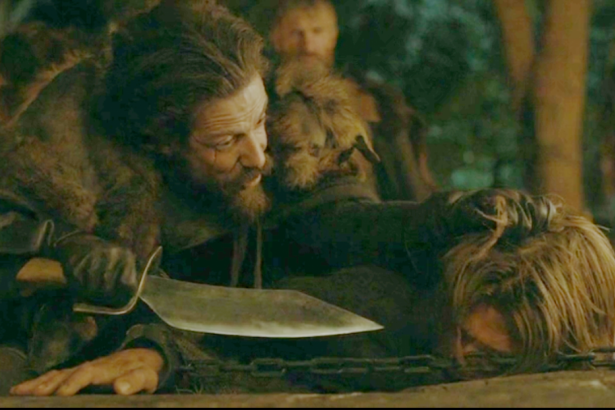 'Game of Thrones' S03E03: Give the man a hand... Oh, and I hope you like triceratops bread. Major spoiler alert, by the way.

Welcome back, Dire Wolf fans! Thanks for joining me for the recap and review for "Game of Thrones" S03E03, titled "Walk of Punishment". I wonder where this title may come from. Last we left Brienne of Tarth and Jaime Lannister, they were cockblocked during their swordfight-and-likely-hookup, just after the swordfight bit:

So, instead of anyone doing the walk of shame, the chumps who interrupted them will probably have to do the walk of punishment, right? Right?

Only one way to find out, and that's to read on. Spoiler alert, etc. Okay, let's get into it.

We're at the funeral of Catelyn Stark's dad, Hoster Tully. It's a sort of Viking sendoff, complete with a flaming-arrow finale, like in the 1992 Olympics in Barcelona. Unfortunately, though, the archer, Robb Stark's uncle Edmure Tully, is total shite and misses shot after shot. Awkward. Awkward to the extent that Robb Stark can't help laughing. You know how it is, when you know you shouldn't laugh, but that only makes it harder not to? Catelyn is like, ಠ_ಠ.

Finally Catelyn's uncle, Brynden Tully, grabs the bow, checks the wind, fires a flaming arrow and walks away without looking back to see it strike home, "Bad Boys 2" style.

Robb and Brynden gang up on Edmure later on, blaming him for screwing up the Battle of Stone Mill, where his impatience cost Team Stark the chance to kill Gregor "The Mountain" Clegane. Now all they have is a mill and some useless-ass prisoners. What, you think Tywin Lannister will throw in the towel just because Team Stark grabbed a couple of tween Lannister hostages? Hell, no. Robb didn't surrender when Arya and Sansa were taken, so obviously neither will Tywin.

Cash rules everything around me

Speaking of Tywin Lannister, we join him at King's Landing, where he's meeting with Tyrion, Cersei, Petyr Baelish, Varys the Spider, and Grandmaster Flash Grand Maester Pycelle. Cersei makes a big show of moving her chair to her daddy's right hand, facing the others. Tyrion makes an even bigger (and louder) show of moving his own chair to the other head of the table, facing Tywin. 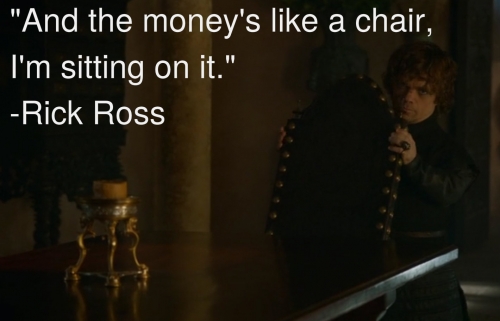 Let's take a moment to sympathize with Tywin Lannister. He's embarrassed by his two eldest children, and rightly so: they’re arrogant, overreaching screw-ups (and screw-each-others). He loathes his youngest son Tyrion, whom he blames for his wife's death and for being short and for proving too smart for his own good.

Worst of all is his grandson: Joffrey Baratheon is easily the biggest douchenozzle that Westeros has ever seen, and Tywin knows it. Jeez, my houseplant would make a better king. This is my houseplant. I bet it gets more ass than Jon Snow.

However, Tywin takes all this all out on Tyrion. Is it because he sees some of himself in The Imp, and we always hate our own faults when we see them in others? At any rate, Tywin is sending Petyr Baelish (now Lord of Harrenhal, for what it's worth) to the Eyrie to marry Lysa Arryn, and declaring Tyrion in charge of Kings Landing's finances. By the way, remember that Petyr has a thing for Catelyn Stark, who's Lysa Arryn's sister.

Tyrion is angry at this, reminding everyone that he's brilliant at spending money, but crap at managing it. Being Master of Coin is not about making it rain. It's the opposite, in fact. This new position coincides with the upcoming Joffrey Baratheon-Margaery Tyrell wedding, which will no doubt require the crafting of thousands of commemorative mugs, and will therefore cost a freakin' fortune.

Meanwhile, the Lannisters still don't know where the hell Jaime is. I can help you with that, guys...

Another fine mess you've gotten us into

Shite. Brienne and Jaime didn't decimate their interlopers, a gang of Stark loyalists led by a guy called Locke. Instead, they're comically tied up on the back of a horse. 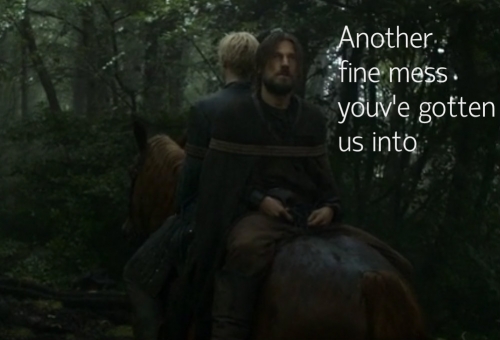 What's not funny is what'll happen next: Jaime tells Brienne to get ready for rape, and lots of it. He advises her to lie back and think of Renly, but that, if it were him, he'd force his captors to kill him.