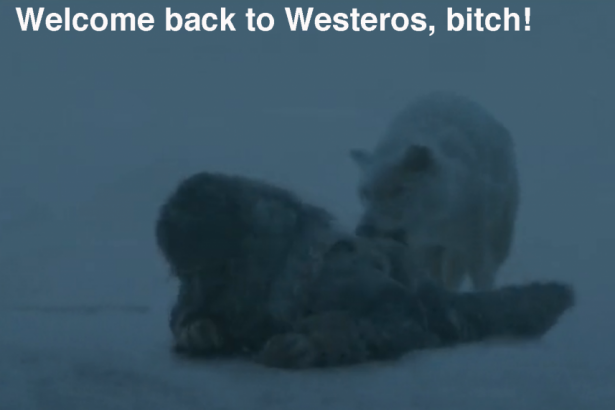 Greetings, Dire Wolf fans! Game of Thrones is finally back with Season 3. The season premiere episode is titled “Valar Dohaeris”. Spoilers and NSFW language to follow. For those of you who followed this review series from NowPublic, thanks for returning. For those of you just tuning in, thanks for doing so.

Sorry this recap/review didn’t go up immediately after the GoT premiere on March 31. I had stuff to take care of.Anyway, we’ve all waited long enough. Let’s get into it.

We open not with the expected clockwork intro, but with the sound of battle, and Samwell Tarly running through the snow north of The Wall. He’s also probably pissing his pants. He’s looking for his friends. He finds one, but the guy's head is at his own feet. Behind him, a White Walker approaches with an ax. Oh, this is it for Sam… No! Wait! A badass Dire Wolf takes the White Walker down! (I’m thrilled that Game of Thrones is getting serious with the Dire Wolves this early in the season. Keep up the good work.) That looks like Ghost, Jon Snow’s Dire Wolf.

Sam’s alive, but is now getting chewed out by Jeor Mormont, who just torched the White Walker. I guess the torch is like the double-tap.

Apparently Samwell had one job. One. Job. To send out some ravens, presumably to warn everyone about the approaching army of Iron Maiden album covers. Sam somehow failed at that job. Now the surviving rangers have to get back to The Wall themselves to warn the rest of the Night’s Watch. Jeor Mormont is a crappy motivational speaker, actually.

Okay, clockwork intro. We see King’s Landing, Dragonstone, Harrenhal, Winterfell (RIP Ned Stark), and The Wall. Then we Google-Earth over to Astapor, in a place called the Gulf of Grief. Looks lovely.

Jon Snow and Ygritte arrive at Mance Rayder’s King-Beyond-the-Wall camp. (Remember, Jon was taken prisoner by Rayder's wildling army, and had to kill Qhorin Halfhand to gain an elevated position. Rayder is a former ranger himself, and is really into Crow-on-Crow violence.) Wait, WTF, is that a giant?  “First time you’ve seen a giant, Jon Snow?” (His face says, “Uh…yeah.”) “Don’t stare too long. They’re shy. When they stop bein’ shy, they get angreh.” Ygritte still loves winding Jon up. She has his sword.

(Not for nothin’, but why didn’t Jeor Mormont, or Qhoris Halfhand, or anybody else think to tell Jon that there were giants north of The Wall? Something like, “Just an FYI, Mance Rayder has giants.” That’s poor management. I was going to apply for the Night’s Watch via LinkedIn, but now I’m not so sure.)

Ygritte is selling Jon Snow as a traitor to the Night’s Watch. The guy who's presumably Mance Rayder wasn’t a fan of Qhorin, and drops the first four-letter-C-word  of the season at roughly eight minutes, thirty seconds in. Jon is trying to look hard. Then he blows it by bowing and calling whom he thinks is Mance Rayder “your grace”.

That’s not even Mance Rayder. You know noothin’, Jon Snow.  Ygritte and the Lord of the Bones leave the tent. Ygritte scopes out Jon’s ass on the way out.The real Rayder, who was sitting quietly in the corner this whole time, totally notices. He and Jon shake hands, but Jon’s not doing so well in the interview. Jon salvages it by recalling the White Walker he saw at Craster’s Keep (the guy who boned his daughters to give him more daughters... to bone) and declaring himself on the side of the living.

This rule is so underrated: Keep your family and business completely seperated

Down in King’s Landing, Tyrion Lannister is holed up in his tower chamber/cell. He’s scarred from battle, and had been fired from his gig as Hand of the King. Now his sister (and queen) Cersei Lannister has come a-knockin’. What now?

Tyrion answers the door with an axe, because he’s not stupid. Cersei's bodyguards wait outside while she sees what Tyrion wants.