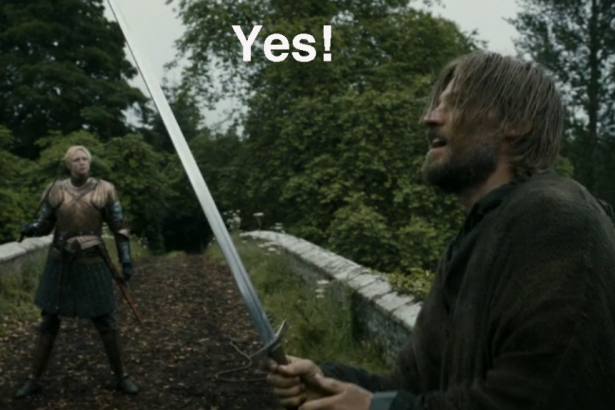 Game of Thrones S03E02: This was perhaps inevitable.

Welcome back, Dire Wolf fans! This is the recap and review for "Game of Thrones" S03E02, titled "Dark Wings, Dark Words". As you may imagine, there are spoilers ahead. With no further ado, let's get into it.

David Bowie made me do it, in my dream

Bran Stark is standing in the woods, so we know we're watching a dream. Okay, so that three-eyed raven is also a giveaway. Bran tries to Hunger-Games the raven with his bow, but fails. Dream-Jon-Snow and Dream-Theon-Greyjoy coached him through the shot, but now they laugh when he misses. Why does Bran see the two guys who aren't his brothers? Why doesn't he see Robb Stark, or even Benjen? [Correction: He does. That's Robb with shorter hair.] The voice of Ned Stark comes to his son's rescue; oh, how we miss you, Eddard, with your misguided honesty and sense of fair play. Bran is next visited by, hang on, is that teenage David Bowie? I bet it is. Teenage David Bowie tells Bran that he cannot kill the three-eyed raven... because Bran is the three-eyed raven. Wut.

Bran wakes up. Hodor Hodors if Bran's okay. He's like, "Yeah", and Hodor's like, "Hodor". Osha, that wildling from "About a Boy", asks Bran if he was having another wolf dream, but then she doesn't want to hear a single word about no three-eyed raven. She's all, "We got plenty o' worries, we don't need te pour black magic on top of 'em." Well, next time don't ask.

Osha and Hodor are striking camp, taking Bran and Rickon north to The Wall. See, if Samwell Tarly had sent those ravens...

It's Robb Stark, the King of the Nooorth! His wife, Talisa "Dat Ass" Magyr is calling him a grim, bearded, stinking barbarian. He kinda likes it. Just before they can break in Harrenhal with some HBO sex, they're cock-blocked by some bad news: Catelyn Stark's dad, Hoster Tully, is dead. Robb offers to escort her to Riverrun for the funeral. Oh, and Robb is just now finding out that the Iron Islanders have destroyed Winterfell. Robb has no idea if Bran and Rickon are still alive, or if they're in the clutches of...

Theon Greyjoy, who's held prisoner in some sort of Guantanamo-Bay dungeon, tied to an X. Not a cross, an X. He's being tortured by... look, I dunno, some guys. They don't introduce themselves. They're not wearing name tags. It's like in "Empire Strikes Back" they don't even ask Theon any questions. I bet he wishes he was back home at Pyke, feeling up his sister.

'Piss on You' remix

Yes! Jaime Lannister and Brienne of Tarth! The best action-comedy team in Westeros is back for Season Three. Brienne is marching her prisoner from Camp King of the North to King's Landing, and Jaime has been complaining the whole way. Team Stark has no way of knowing that Arya fled Kings Landing, since they don't have any 3G reception at their camp. Jaime doesn't just look like Sawyer from "Lost", he also gives people nicknames. Example? Okay, he calls Brienne "a giant, towheaded plank". ("Towheaded" just means "blonde", but it's the way he says it.) 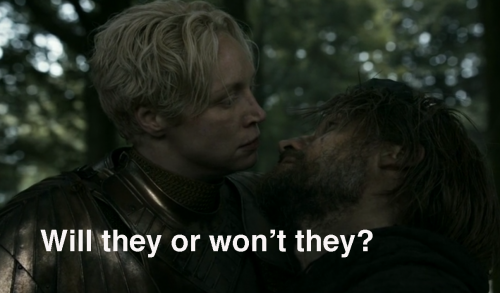 Jaime winds Brienne up about her fancying Renly "Not Into Chicks" Baratheon. See, I still think they're going to hook up: when Jaime makes tall jokes about Brienne, she doesn't retaliate with a short joke after watching him take a piss. (When I saw this scene, I couldn't help but think of this Dave Chapelle classic.) 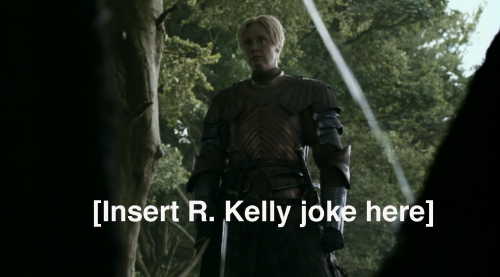 As they banter, Brienne and Jaime are interrupted by a passing peasant. He seems pleasant enough, but Jaime is sure that they've been recognized. Jaime Lannister is a bit of a celebrity. That is, for slaying Aerys Targaryen (hence "Kingslayer"), not for doing his sister. Pretty sure that's not common knowledge, except for among the well-connected families and HBO subscribers. Jaime tries to get Brienne to kill the dude, but she refuses. 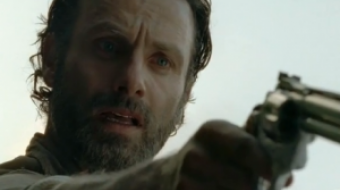 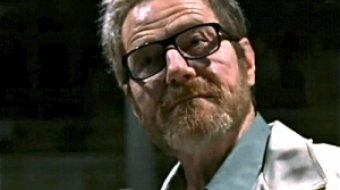 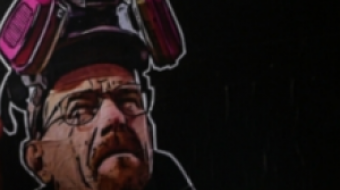