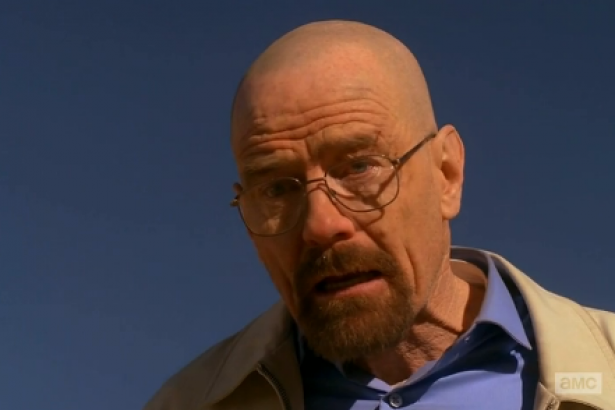 Breaking Bad S05E15: 'Ozymandias'. Yeah, that was pretty much my reaction, too.

Welcome back, meth heads! Here you'll find the recap and review for "Breaking Bad" S05E14, titled "Ozymandias". My digital cable listing summarizes it thus: "Everyone copes with radically changed circumstances." Uh, thanks. When we last left Walter White and Jesse Pinkman, they were not exactly having an A1 day. They're caught in the middle of a gunfight, but there's a silver lining: it's a gunfight between the worst marksmen in New Mexico.

At least Hank Schrader and Gomez can return fire, while Walt and Jesse have to sit tight and hope the neo-Nazi rednecks' bullets don't figure out that they can penetrate car doors. Jesse just regained the ability to call people "bitch", too. Let's see how our anti-heroes get out of this one... if all of them even do. Spoiler alert, obviously.

We start not with a bang, but with a flashback. Walt (with hair and sans pants) is cooking with Jesse for the first time. Walt is impatiently describing chemistry to a bored Jesse: exothermic reactions are those which give off heat and heavy-handed metaphors. Jesse is like, "Put me into a coma, why don't you..." 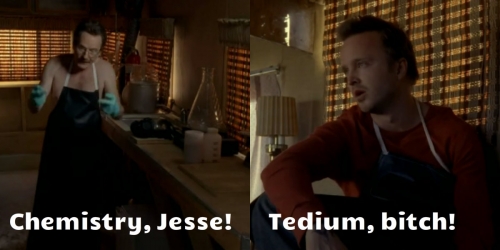 While Jesse goes for a smoke, Walt rehearses his first-ever meth-related lie. He then calls Skyler, launching into some cockamamie excuse for why he'll be late. Skyler, who's busy packing a terrifying ceramic clown for an eBay buyer, is like, "Whatever, look, just bring home some pizza." This was back in those innocent days when pizza didn't end up on the roof.

During this otherwise-banal conversation, Skyler and Walt discuss Holly for the as-yet-unborn baby girl's name. Walt admits that "Holly" is growing on him. Almost like... a plant.

Walt-from-the-past fades out, as does the RV, replaced by the gunfight tableau of the present.

The shooting stops. Hank is hit in the leg, and he's out of ammo. Gomez still has some rounds left in his shotgun, but unfortunately he's dead. RIP, Gomie.

Hank crawls for the shotgun, but he's intercepted by Uncle Jack. Just as Jack is about to execute Hank, Walt kicks up enough of a fuss that Todd has to pull him from the back of the SUV. Walt then begs for Hank's life, admitting that the DEA agent is his brother-in-law and offering the neo-Nazis his barrel money in exchange for Hank's life. $80 million. Wow. Is that another Walt lie? Does he actually have less than that? Or more?

When Jack asks Hank if they have a deal, he replies like a boss: "My name is ASAC Schrader, and you can go fuck yourself!" He tells Walt he may be the smartest guy he's ever met, but he was too thick to notice that Jack has already made up his mind. Too tough things to admit.

Jack shoots Hank in the middle of his final speech. 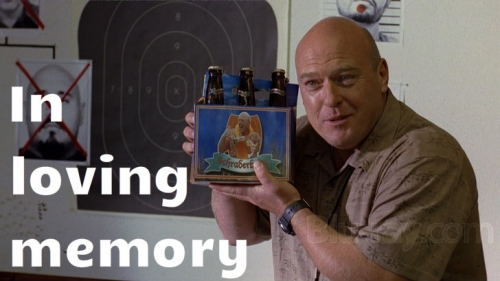 Jack may be a neo-Nazi redneck, but he's smart enough to know that the co-ordinates Walt gave him are those co-ordinates. Naztache has an app for that, and before long they're digging up the barrels of Blue Sky cash. Hank and Gomez are dumped into the hole and buried. The unmarked hiding place is now an unmarked grave.

Jack orders all but one of the barrels to be loaded into the redneck pickup. That last barrel? It's for Walt: "What's with all the greed? It's unattractive."

If you're wondering why Jack didn't just kill Walt, well, he'll tell you. Todd basically worships Heisenberg, and would never forgive Jack if he killed the legend. He makes Walt promise that they're square. Walt promises. 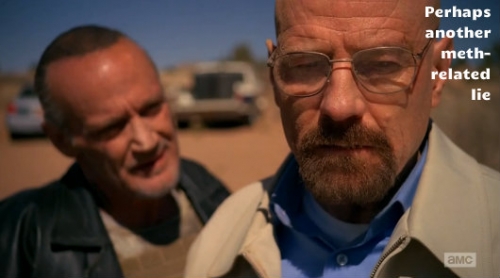 Then, eyeing Jesse hiding beneath his black Chrysler, Walt reminds Jack that he still has a hit to carry out.