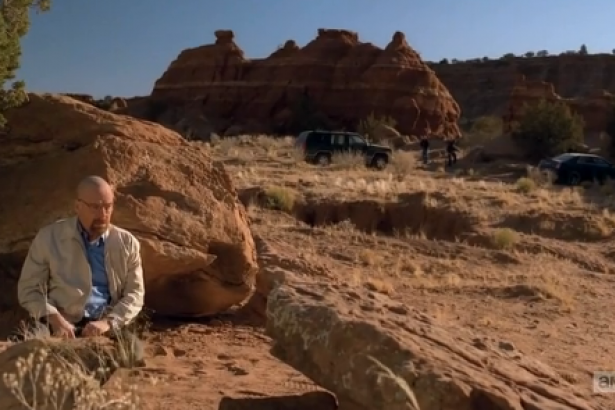 Welcome back, meth heads! Here you'll find the recap and review for "Breaking Bad" S05E13, titled "To'hajiilee". which is the name of a Native American reservation west of Albuquerque. More to the point for “Breaking Bad” fans, it’s where Walter White and Jesse Pinkman did their first meth cook in that crappy RV, and where Walt has buried those barrels of cash.

One of the biggest oh-shit moments in “Breaking Bad” happened at the very end of S05E12, where Walter finally decides to have Jesse killed.

Around him looms the larger change: Walt is no longer in control.

So now Walt has Jesse in the crosshairs, and Jesse is returning the favor. Meanwhile, Marie Schrader is turning into Hanna Mackay from "Dexter" and Hank Schrader has been demoted to assistant in his own investigation, and by Jesse of all people.

Major spoiler alert, in case there was any doubt. Okay, let's cook.

Martha Stewart would have nailed it, Todd

Lydia Rodarte-Quayle is visiting the Nazi Meth Gang, and she doesn't like what she sees. 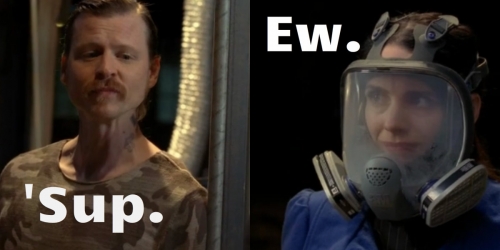 The quality of the meth is a little better now, sure, but here's the thing: it's not blue. Lydia's buyers want blue. Also, Lydia wore a blue jacket, so now the meth doesn't match.

Like most meth cooks, the Nazis are crap at chemistry. Also, for a bunch of guys obsessed with color, the Nazis have trouble recognizing the color blue. They suggest adding blue food coloring, comparing their product to farmed salmon, whose flesh is artificially colored pink. (That's true, by the way.)

As he brings Lydia some tea, Todd admits that he burned the meth (yes, Lydia, like a cake), hence the lower purity and the distinct lack of blue.

Lydia turns on the charm to coax Todd into redoing the dodgy meth batch. Lydia is indeed kind of charming, albeit in a twitchy, I-might-die-horribly-at-any-moment-permanently-afraid kind of way. Devolved Matt Damon is, in a word, smitten. 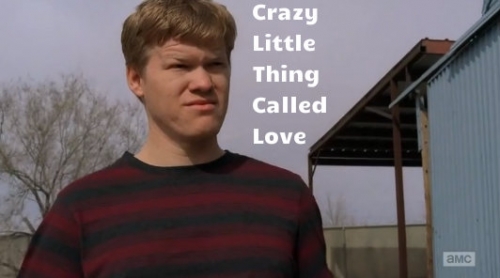 Todd's phone rings; his ringtone is Thomas Dolby's "She Blinded Me with Science".

Ah, so here is the call that Walt made at the end of S05E12, and this is a dovetailing scene like in "The Bourne Ultimatum"... and it features a guy who looks kind of like Matt Damon.

Hank and Gomez meet under a bleak overpass, discussing just how badly their sting operation went. They agree that it was a total shit-show, and Gomez grudgingly hears out Jesse's plan. While Jesse doesn't know where Walt's Blue Sky bucks are, he knows who might.

First, though, they'll need some brains... 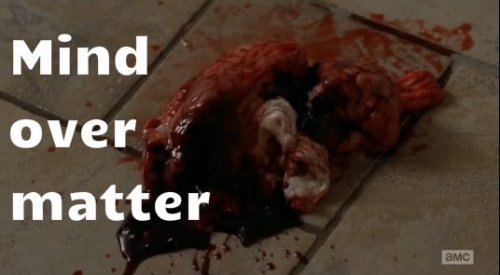 The plan involves corralling Huell and convincing him that Walter has put a hit out on him. Hank convinces Huell (whose surname is Babineau; I always thought Huell was his surname) that Kuby is already dead, and shows him a phonecam pic of Jesse, who appears dead, thanks to the supermarket's meat department. The whole plan hinges on Huell thinking that Saul Goodman sold him and Kuby out to Walt, and that Jesse is already dead. Huell buys the whole thing. 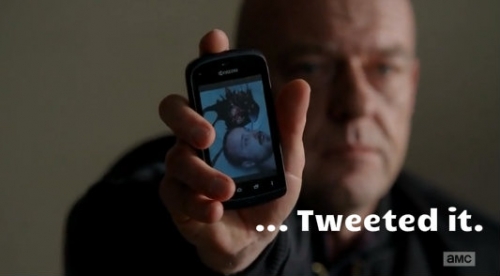 All they get, though, is that Walt loaded the money into barrels and drove them away in a rental van. He later came back with a shovel and a van full of dirt.

Meanwhile, Walt is meeting with Todd and Uncle Jack. He wants the Nazis to whack Jesse, but angrily asserts that his former partner is not a rat (spoiler: yes, he is). Walt reckons Jesse is just angry. Uncle Jack asks, "How angry? Hulk angry? Rambo? James Bond?" I wouldn't describe James Bond as "angry". Well, maybe Daniel-Craig James Bond. Overall, though, I'd say that Jesse is Hulk-angry. 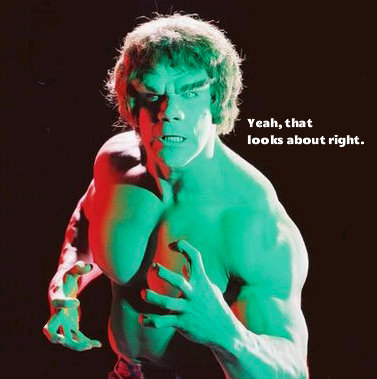 Even Uncle Jack thinks that Walt may be resorting to violence a little too soon. However, he's willing to ice Jesse if Walt comes out of retirement to give them a Blue Sky masterclass. Walt agrees to coaching the Nazi Meth Gang through one more cook.