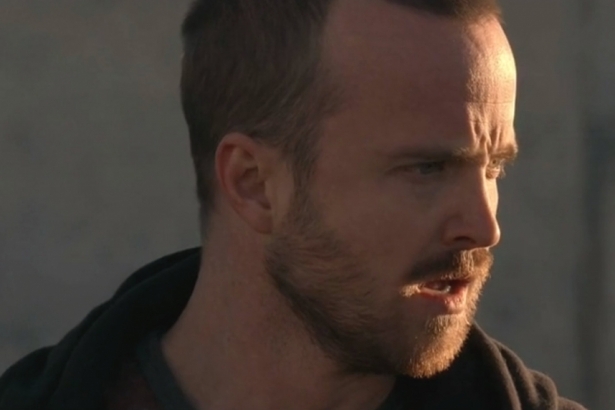 The show so far: the "Breaking Bad" body-count chart is woefully outdated, courtesy of Todd and his neo-Nazi uncle Jack.

Lydia wore Manolo Blahniks to a middle-of-the-desert meth-lab massacre. I totally thought that Lydia was gonna die down in that buried meth bus, too. 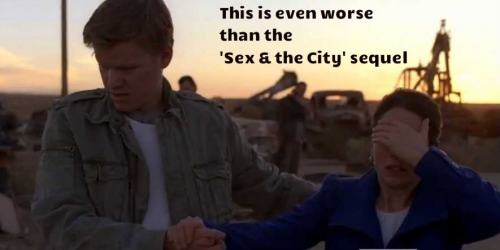 Hank has accepted that exposing and catching Heisenberg means ending his own career. Marie learned that she cannot outshriek Holly, who has proven to be the loudest prop in TV history.

Meanwhile, Jesse just doesn’t feel much like talking, silent in the face of police interrogation. We’ll see how he does in a rematch with Uncle Hank, who had previously tried to con Skyler into not lawyering up. Better call Saul; that is, unless he thinks you’re trying to wiretap him.

Oh, and, this happened: 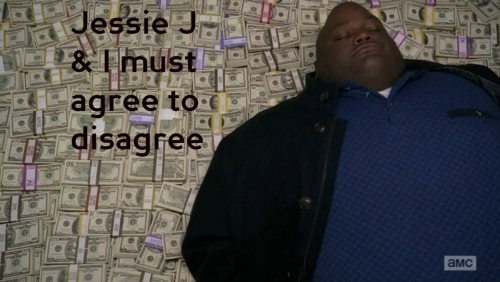 The title of S05E11 is "Confessions", so will Jesse crack under pressure? Who's up next for that trip to Belize? Oh, and here are some “Breaking Bad” bingo cards, updated for the final half of S05.

Get your hicks on Route 66

Todd (aka Matt Damon's mutant cousin) is regaling his uncle Jack and Jack's Nazi buddy with the tale of the Great Methylamine Train Heist as they sit in a Route 66 cafe. For some strange reason, Lydia didn't join them. I know, right?

Also for some strange reason, the waitress is uncomfortable getting eye-banged by two swastika-tattooed lowlifes. To each their own. In the cafe toilet, Jack and his buddy take a piss while lamenting airline smoking rules and bicycle helmet laws. As his buddy combs his Nazstache, Jack wipes Declan's blood from his boot.

So Declan's low-quality tweaker meth apparatus is now in the hands of Jack's neo-Nazi crew, and on its way back into New Mexico. Todd is now the Head Chef in Charge. Has anyone ever quit meth for political reasons? Now would be the time.

Jesse is keeping his mouth shut during Hank's questioning, even when Hank reveals that he knows Walt is Heisenberg. Jesse says, and I quote, "Eat me." That he didn't finish the sentence with "bitch" really lets us know how far Jesse has spiraled. Hank is right, though, in pointing out that happy people don't give away millions of dollars. 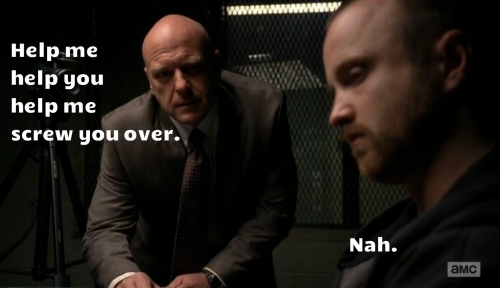 Saul bursts in at just the right time, chasing Hank and the two lanky cops out before trying to figure out why Jesse is such a gong show lately.

Walt Jr. comes home, so Walt frantically uses the contents of Skyler's makeup drawer to cover up the facial wounds inflicted by his bathroom floor in last week's episode. Because that's the big thing he's gotta hide from his son.

Walt Jr. yells from across the house that Marie asked him to go fix her computer and stay for dinner. Walt is like, (ಥ⌣ಥ), and sits his son down to tell him that the cancer is back. Walt Jr. vows to stay in for dinner with the fam. 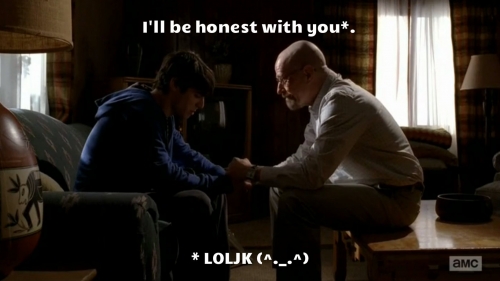 Later that evening, Hank comes home looking like a guy whose brother-in-law is a meth kingpin on the verge of getting away. He tells Marie that he can't bring his work buddies in on this just yet.

Meanwhile, Walt sits on his bed as Skyler sets up the video camera, so he can film a terrorist ransom confession video of some kind... 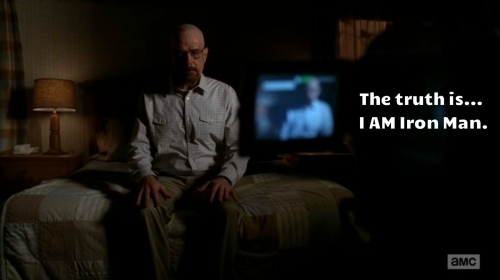 Walt and Skyler meet up with Hank and Marie at what is surely the whitest Mexican restaurant in the state of New Mexico. Throughout this scene I kept thinking, "Surely they could have found a more authentic Mexican restaurant in freakin' Albuquerque?" Garduño's is a real restaurant, actually. They have something called the Pizzadilla on their menu. Not making that up. But seriously, though, this sort of restaurant is exactly where this family would gather. 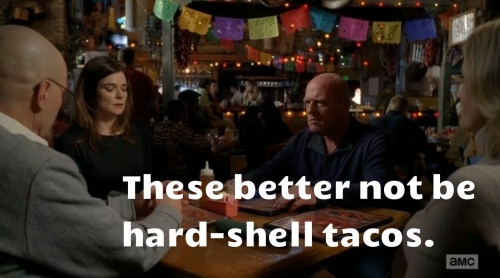 For her part, Skyler tells Walt and Marie that the nothing that's been going on lately isn't going on anymore. Stop helping, Skyler. Marie notes that there's no telling where the lies begin and end. I disagree. They begin with "Previously on 'Breaking Bad'", and end with the credits.