"Breaking Bad" wastes no time in getting down to business as it enters the final stretch. No multi-episode foreplay between Walt and Hank, so sir/ma'am. Is it accurate to say that two guys with such smooth heads have locked horns? Yeah, let's go with "locked horns." 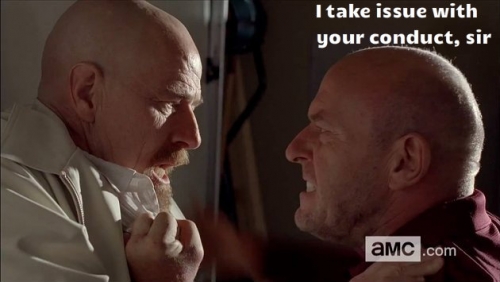 Jumping in with both feet is a bit of a "Breaking Bad" specialty, along with slinging pizzas onto roofs and giving every single inanimate object its own POV shot. Walt goes from hapless chemistry teacher/car wash chump to meth chef/murderer in just one episode. The rest is history. It won't be long now before Rancho Depresso is an abandoned husk and the Whites are scattered to parts unknown, provided they're all still alive.

Walter White vs the State of New Mexico

Haters gonna hate, it's true. In Walt's case, though, many of his haters have badges, and all of them have guns. He made insane amounts of money by cooking up Blue Sky, but he's making an insane number of enemies through rash decisions and cascading levels of mendacity.

Walter White is basically the worst thing to ever happen to Albuquerque. His rise in the meth industry has led to nearly 250 deaths in under a year and a half (if you count the plane crash), making him roughly 1/14 as deadly to the state of New Mexico as cancer, while himself managing to avoid becoming a casualty to that particular disease.

It's the Heisenberg Plague, for real. You'll find a chart at the bottom of the page if you don't believe me.

Not anymore. Soon the very sight of Walter White will make his neighbors drop their groceries in terror.

Skyler: Something about glass houses and stones

Skyler's storyline hasn't always been super-compelling, but her character has developed tremendously since we first met her. Remember in S01E01, when Skyler was giving Walter a half-assed Happy-Birthday hand-job while monitoring her ebay sale? 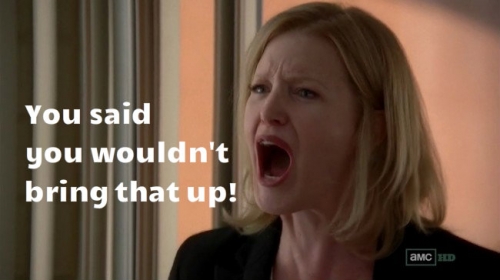 Hey, it's relevant. Anyway, now Skyler is a money-laundering accessory in Walter's criminal enterprise, and she's aware that she pretty much married a sociopath.

Skyler is pretty self-absorbed, but you can give her props for trying to protect her kids, ill-conceived though her plan may have been. Seriously, if she's really afraid that murderous underworld thugs will come gunning for Walt, does she actually believe that they won't be able to find her kids... at her sister's house?! And what the hell is Marie gonna do if armed cartel goons bust in? Huh? Is she gonna purple them to death?

Besides, Skyler has made quite a few her own shitty decisions, mostly revolving around Ted Beneke. I'm betting the IRS will come a-knockin' this week, by the way. That whole Skyler-Ted storyline has been shelved for too long, and we're all just waiting for the other shoe to drop.

I used to loathe Skyler; now I merely find her annoying. It's progress.

If it weren't for Walter White, Jesse Pinkman would surely be in prison by now. He had escaped Hank's dragnet only by virtue of shagging the neighbor, but it was only a matter of time before Captain Cook was taken down. "Chili P is my signature!" Yeah, Jesse, so was being a dumbass. Honest Movie Trailers nails it by referring to Jesse as "a Juggalo without the makeup". Unlike Juggalos, though, Jesse knows all about magnets. 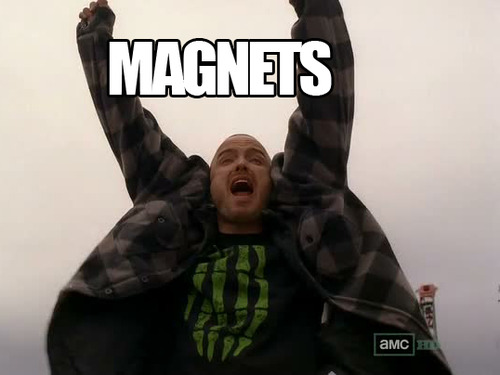 Hang on, you gotta see this:

Jesse has grown up since those days, and he's developed a conscience during his sober periods. Not the sort of thing you want if you're living in Walter White's orbit. It's worth considering that Jesse would be better off in prison than where he is now.