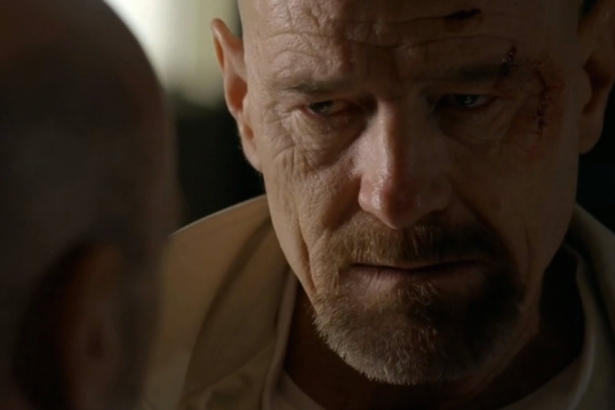 You'll get crow's feet by watching 'Breaking Bad' S05E09, so just read the recap instead.

When we last left our anti-heroes, the Fellowship of the Fring had failed: Mike is dead, Jesse is out of the game, and Walt has told Skyler that he’s done with felonious chemistry despite his deal with Declan. Since this is “Breaking Bad”, of course we don’t believe Walt for a second: the dude is Heisenberg.

We know that, whatever happens between Hank taking an oh-shit and Walt ending up at a Denny’s disguised as Tommy Lee Jones, Walt will need to get hold of a big-ass machine gun. Only eight episodes between now and the end.

We start out in an Albuquerque subdivision, where a bunch of teenagers are skating in an empty pool behind an abandoned house. Up pulls Tommy Lee Heisenberg in his hooptie. He breaks into the house, where he finds graffiti in his honor. Oh, so this was his house. The place is a mess, doors broken down, dust bunnies everywhere. Actually, it’s only marginally more depressing than it was when Walt actually lived there.

Walt unscrews the power outlet cover in the master bedroom and recovers his precious vial of ricin before heading back out into the street. He encounters his neighbor. She’s frozen in fear as he maintains eye contact like a boss: “Hello, Carol.”

So, in the Albuquerque of Tomorrow, the legend of Walter White has gone public.

The deuce is loose

After the credits, we’re back in the past/present, since Rancho Depresso is back to its former “glory”. We’re looking at the bathroom door for a moment, until Hank emerges, clutching the Walt Whitman book, his facial expression unchanged since before the midseason break. This whole moment is silent, so I don't think he flushed.

Hank limps back toward the back patio, pausing in the kitchen to decide, “Oh, I know, I’ll steal Walt’s book.” Hank looks freakin’ awful as he rejoins the party, just as Marie is saying to Walt, “Oh, you’re the Devil!” #OnTheNose

Hank  makes his excuses to leave with Marie. As they drive back, Marie is nattering on about holidaying in Europe like Walt and Skyler are planning to do. Hank is approaching Wolverine-berserk levels of freakout, until he just loses his shit and crashes the SUV into some dude’s yard. 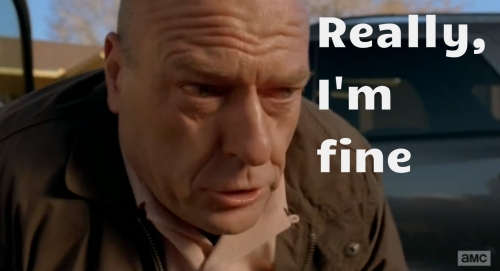 Marie’s all, “Call an ambulance!” For some reason, the dude who owns the house is not all, “I’m calling the damn’ cops!”

Meanwhile, Walt and Skyler probably went back into their bathroom to find a slowly-circling deuce. Not cool, Hank. Not cool. You should have followed this advice: 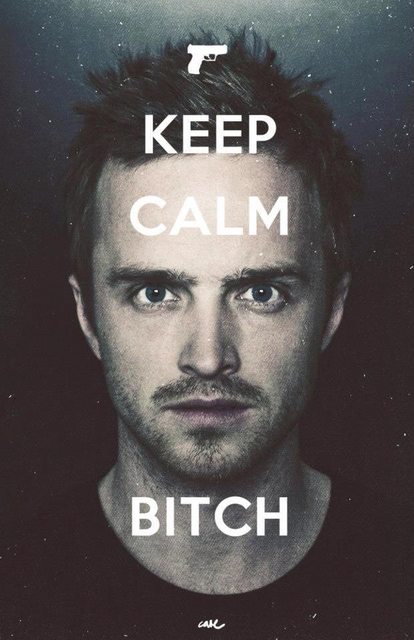 The next day, Walt and Skyler are playing a game called Suburban Car-Wash Tycoon. They’ve unlocked Wonderbread Spanish and Matching Beige Outfits, and are now working on expanding their operation to speed up the money-laundering process. Walt seems legitimately keen to leave the cooking game, though there's a freak-ton of money-moving left to do.

Who should show up but Lydia Rodarte-Quayle, looking… waitforit… nervous and uptight. 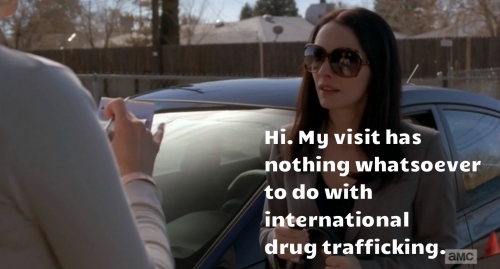 Turns out Lydia is playing a game called International Meth Tycoon, and she's not too good at it. In the what, month since Walt has stopped cooking, quality of the Blue Sky meth has dropped to 68%. I mean, that’s the sort of shit Pennsatucky would smoke.

Skyler figures something is up because Lydia, the brilliant criminal mastermind that she is, rocked up at a car wash in a rental car. Skyler stalks Lydia back out to the forecourt and runs her off the property.