In the last while two high profile fighters have left the UFC: Georges St. Pierre and Wanderlei Silva. Both left under duress, otherwise known as Dana White.

White is credited with pitching the UFC to the billionaire Fertitta brothers, and it was his vision that brought it from the brink of disappearing. And who can forget how The Ultimate Fighter’s  season one finale between Forrest Griffin and Stephan Bonner brought the sport into the perception of millions of people? TUF was White’s baby. I appreciated this and when White was in Vancouver in 2011 I thanked him personally.

But along with the burgeoning new sport, fans have had to withstand White’s open feuds with fighters, often the highest profile fighters, and have had to listen to his succession of F bombs and take-no-prisoners attitude in confrontations.

GSP originally left amid a cloud of uncertainty. It was unclear exactly what had combined to cause the promotions biggest draw (by far) to retire. He said things like the pressure of title fight after title fight was wearing him out, and also talked about performance enhancing drugs and how he uses none but knows that other fighters do. White wasted no time and attacked GSP in social media, a move that backfired with fans.

More recently, GSP has admitted that inadequate drug testing is the main reason for his departure, a sentiment most fans agree with wholeheartedly. There needs to be fair testing and a fair playing field.

In a YouTube video announcing his retirement, Silva said, “I can’t do this any more. With a heavy heart, I come here today to declare I am stepping down from the ring. After today, Wanderlei Silva will not fight again. My career is over because I don’t have a stage to perform where the athletes get the proper respect.”

Rampage Jackson is another high profile fighter who left the UFC under stress. One of his issues was that the UFC began requiring fighter’s sponsors to pay the UFC for the right to sponsor, which leaves less money to pay fighters.

And UFC fans can’t forget the huge, public feud White had with Tito Ortiz, who at the time was one of the promotion's biggest stars.

White has intimated many times how he wanted to avoid the pitfalls boxing had when Bob Arum and Don King were manipulating that sport to their benefit and at the expense of fighters and fans. Sadly, White’s personality is bringing in a new set of drawbacks in fight sports. Namely the patriarchal “It’s my way or the highway” mentality, and banishment from his world it you fail to comply.

Any doubt I had about "he said, she said," were quashed when I saw White interact with followers on Twitter. He is needlessly rude and insulting, and not with fighters or people in the business, but with fans. I asked myself, would I patronize a shop or restaurant that treated people in this manner?

So now I find it impossible to involve myself as deeply in the sport I’ve loved and followed since UFC 1 back in 1993. I’ll still keep an eye on it, watch the odd free event on TV, and maybe watch a few larger ones at the bar, but I can’t qualify directly putting money in White’s pocket. Not anymore.

After UFC 4 a lot of people noted the Gracie’s, who had co-created the event,  needed to step back and let the sport unfold. They did, and it did. After that SEG, then the owners who’d taken it to the early 2000s, decided it was time to hand off the baton. For the sake of the sport, White needs to take a back seat and stop letting his personality be the face of the sport rather than the fighters and fights.

I doubt he will.

A champion and a former champion make each other dig deep in this stellar middleweight title match.
Renko StyrankaJul 6th, 2014 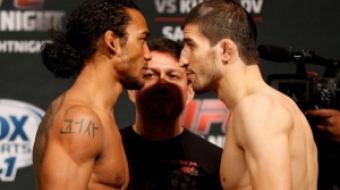