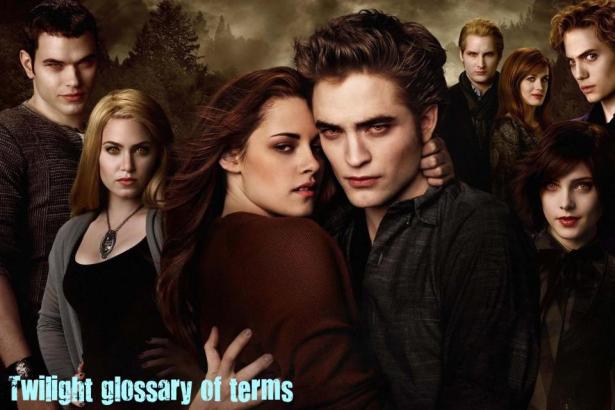 Twi-guy: a male who is obsessed with all things Twilight
Twisexual or Super-twisexual: an individual who is attracted to only supernatural beings
OME: Oh, my Edward, used in the same way as oh, my God
Vamptastic: fantastic or really amazing, superb
Twilight Syndrome: when a Twihard experiences a sudden loss of reality. (Other symptoms include Edward Cullen hallucinations and a sudden belief that vampires are real)
OCD: Obsessive Cullen Disorder
Twi-hards: a die-hard Twilight fan
Tweaks: Twilight freaks
Tweeks: Twilight geeks
Twilighters: Twilight fans
Twi-fans: another term for Twilighters
Twi-stalking: visiting places just because there were rumoured sightings of Twilight cast and/or crew in the area
Fanpires: vampire admirers, Twihards
Twitubers: individuals who post YouTube videos that express their love for Twilight
Twilightology: the study of all the things Twilight
Twibrary: an individual's collection of all things Twilight (books, posters, t-shirts)
Twidreams: dreaming about Twilight
Aliceazzled: having a girl crush on Alice Cullen/Ashley Greene
Twilinguial: able to incorporate all these terms into everyday conversations
Twiporters: Twilight reporters, like us

The Vancouver Observer has created a few of these terms. Many have been pulled from Twilight Gear.