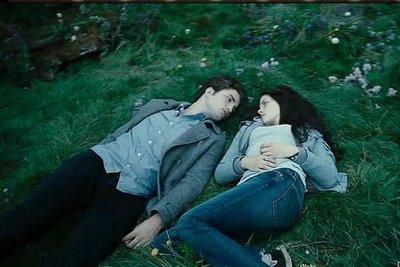 "I've heard people talking about it. Our managers told us: 'We honestly don't want you telling people about it. We don't want a mob scene.' They won't give me details," said a Tourism Squamish spokeswoman who identified herself only as Tammy.  She was answering a question about where the Twilight crew had been spotted in Squamish, BC. where they are said to be filming the wedding scene in Breaking Dawn.

At the Chamber of Commerce, a representative named Jane was equally mystified.

“It’s a big secret where the cast and crew are, so I don’t know about their whereabouts,” she told The Observer. “Everyone has been excited for the chance to see them, but I don’t know anyone who has."

Local bakeries, cafes and restaurants gave curt responses like “I don’t know” and “I have no idea” when asked for information regarding local filming.

"I don't even know if they're in town. I don't know anything. I can't help you," said Barb at the Holiday Inn Express.

But we wonder: Doth the lady protest too much?

At the Best Western, a representative gave a sharp "no" in response to Twilight questions. "I don't know anything. I just work at the hotel," she said.

Amber at Squamish Inn On The Water said: "I could care less." She later admitted that "it would be cool if they would stay here, but they haven't yet."

When we called Rockwell's, where Kristen Stewart and Robert Pattinson held The Twilight Saga: Breaking Dawn wrap party and Stewart celebrated her 21st birthday, a man, almost in whispers, said: "We are not to disclose information regarding that."

Kristen Stewart and Taylor Lautner evacuate BC after tsunami warning