Transport Canada issued a review today approving the supertanker route for the controversial Enbridge Northern Gateway oilsands pipeline. The review stated that oil tankers can safely access a terminal in Kitimat, in northern B.C., to collect crude oil transported from Alberta and to export to Asia and California.

The review by Transport Canada stated that the proposed passages connecting Kitimat to the Pacific Ocean are "appropriate" and do not have obstructions that could threaten the safety of oil tankers. If the Enbridge Northern Gateway oil pipeline is approved, around 250 or more tankers would come to Kitimat over the course of a year. 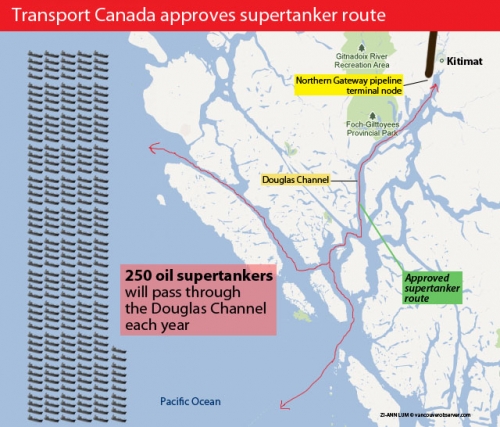 Environmental organizations, however, disagreed that this review brought credibility to Enbridge's proposal.

"The question we should be asking ourselves is: why take any risk at all?" Eric Swanson, director of No Tankers, a Dogwood Initiative campaign, commented.

"It just takes one oil spill in Northern B.C. to wipe out a fishery, to wipe out a way of life or livelihood. One spill could lead to long-term and possibly permanent damage to our province."

If approved, the Northern Gateway pipeline would transport 525,000 barrels a day of oilsands crude from Alberta to the B.C. coast.

Enbridge, meanwhile, said it would "exceed" current industry standards to minimize risks of an oil spill. It has committed to mandating safe speeds for oil tankers and tugs, Transport Canada stated.

See more
"A Disappearance in Damascus": Deborah Campbell's story about friendship and resilience in Syria
"The Future is You and Me" project a shot in the arm for diverse young women in the arts
Speak up about this article on Facebook or Twitter. Do this by liking Vancouver Observer on Facebook or following us @Vanobserver on Twitter. We'd love to hear from you.