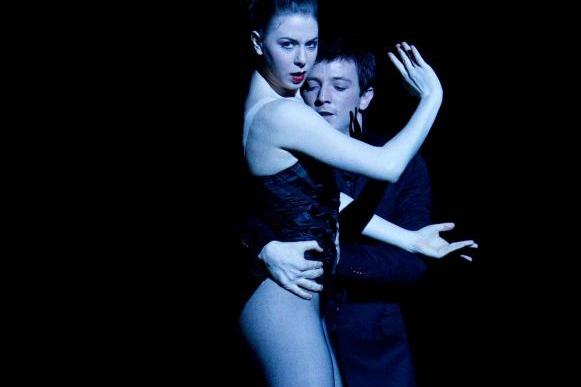 Sourcing material rather than linear retelling, the operas offer the dancers an opportunity to portray the aggression of their technical prowess and artistic expression that is at the heart of these tragic love stories.

With four movements to every beat of music, Lock’s choreography is fast -- “The Flash” fast. Once your eye acclimatizes to the complexity of the movements, the repetition becomes clear: a partnered sequence with the man partnering the double pirouettes this way and that, arms tucked into chest with tortured hands and a solo shape by guest artist Vishneva that suggests the angst of being earthbound with pain. A corps lounging like Ingres’  La Grande Odalisque offer a respite from the lightening speed of the dancers, with their nonstop, sensual hip thrusts en pointe.

Two large projections showed images of the same dancer, one in present tense and one aged. Subtle gestures in the film mirrored the wild gesture of the choreography without offering much subtext. Lacking subtext, the projections length seemed more like an opportunity for the dancers to take a breather in this 90 minute, intermission-free piece, rather than a deepening of the subject matter.

The scores deconstructed by Gavin Bryers and Blake Hargreaves gave a context for the post modern idiom of Locke. Just as the repetitive nature of the movement began to lull, lights came up on the musicians and their rock star status while playing baroque filtered through minimalism and jazz, wholly entertained.

When Lock morphed  from the Louise Lecavalier years, an era signified by androgyny and pedal to the metal risk, and  into his realm of highly trained female ballet dancers scantily clad and partnered by equally proficient suited men in the late nineties, the women seemed  like pawns manipulated by the men, victims of their gender.

Not so now. These women are fierce warriors equal matches for the men, who are as strong. All the dancers are stellar technicians and wondrous in their ability to interpret a language that is so darn fast and so darn hard. For all their abilities, they are individuals and not faceless corps de ballet members, no doubt hired for their strength in personality as well as dance capability. It's a shame the audience did not get to see the whole group dancing together in unit movement, an event that would surely have delighted.

Produced by the DanceHouse series, there is one more show tonight, Sunday January 22 at 8:00 pm at The Centre in Vancouver for the Performing Arts.