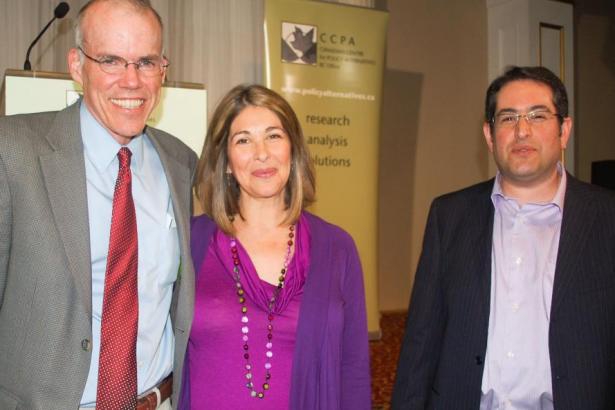 Harper, then in Grade 5, was only one year ahead at Northlea Elementary and Middle School, Toronto (he graduated in 1978), when McKibben's family moved back to the U.S., he told 800 attendees at a Vancouver fundraiser last night.

“I think of that period,” he said, pensively, “remembering what a Canadian I thought I was.”

Earlier this year, the Prime Minister's Office branded U.S. environmental activists “foreign radicals,” because of their opposition to the Enbridge Northern Gateway pipeline and the Alberta oil sands.

“(With) your government talking about 'foreign radicals,'” he quipped, “I think who they were talking about, pretty much, was me.”

The renowned environmentalist – founder of the climate justice group 350.org and author of The End of Nature (credited, in 1989, as the first non-academic book on climate change) – made his comments at a packed gala supper hosted by the Canadian Centre for Policy Altervatives (CCPA) last night.

“We are not the radicals,” McKibben told 800 attendees. “We are just trying to have a planet and a democracy like the one we were born into.”

“The radicals are at Enbridge, Kinder Morgan and Exxon. 'Radical' is defined by the fact that they're willing to alter the chemical composition of the atmosphere. A country (that) talks about foreign radicals and extremists – that's the opposite of a country that's confident and part of the world.”

McKibben's organization, 350.org, is named for the maximum carbon dioxide levels the atmosphere can tolerate, according to scientists. Today, the actual level is 392 parts per million. The point, he said, is that humans have no time to lose before irreparably damaging the planet.

“It's the largest challenge we have ever faced,” he said, “and so far we're not doing a good job of meeting it.

“It will be the hardest thing we've ever done – those with money and power will defend it with everything.”

But the CCPA's keynote speaker at the event also shared images from 350.org protests around the world, including a joint event in which Palestinians, Israelis and Jordanians spelled an enormous number “3-5-0” on three sides of their borders.

“I don't know if it'll come out okay, but all over the world, people are engaged in this fight, many in places that have done nothing to cause this problem,” he said. “It'll be an enormous honour to stand shoulder to shoulder with you in the years ahead.”