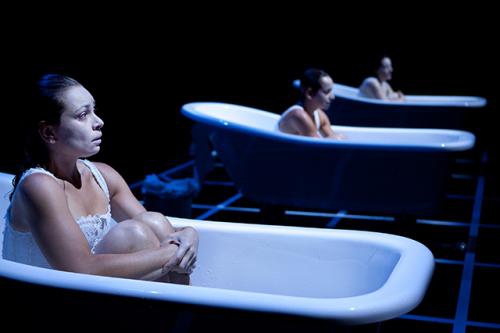 Wooed, married and murdered by one man, three brides rise from the dead to tell all.

Wooed, married and murdered by a scoundrel, three women rise from their graves to share their tales of dating, deceit and downfall.

The Drowning Girls, originally written in 1999 as a shorter fringe festival piece, is based on the true story of George Joseph Smith. Between 1908 and 1914, the serial criminal married seven women, stole from all of them and killed three.

“It’s the same story for all three brides. This Edwardian opportunist wooed them and wed them and then drowned them in the bathtub,” says playwright and actress Beth Graham from her Edmonton home.

“They’re all wooed by him for different reasons and he transformed himself to match what each woman was looking for,” she says.

“We wanted to tell the story from the female perspective. [This play] is telling their side of the story. The events involve him, but it’s their chance to surface from the deaths and tell what happened and why.”

Co-written with two of Graham’s long-time collaborators, director Charlie Tomlinson and Daniela Vlaskalic, the play examines stigmas associated with being a spinster.

“It made me think about how far we’ve come today. Do women still have that kind of pressure?”  wonders Vlaskalic, who also plays one of the women in the piece.

“There isn’t necessarily that stigma any more, but there is so much focus now on being with someone, there’s still that pressure in society of needing to find someone and not being alone.”

Using bathtubs as the only prop, the story unfolds as each woman rises from a claw-footed tub filled with water.

“Water is really the fourth character in the play; we never know what the water’s going to do,” adds Vlaskalic. While water creates captivating visuals, she says the sound of splashing mixed with a minimal soundtrack adds to the piece’s mysterious mood.

“The water transforms everything. It sounds phenomenal and looks magical.”

Tickets and more information on The Drowning Girls