'Virtually all' First Nations are on board with LNG project, says Coleman, but B.C.'s Grand Chief disagrees. 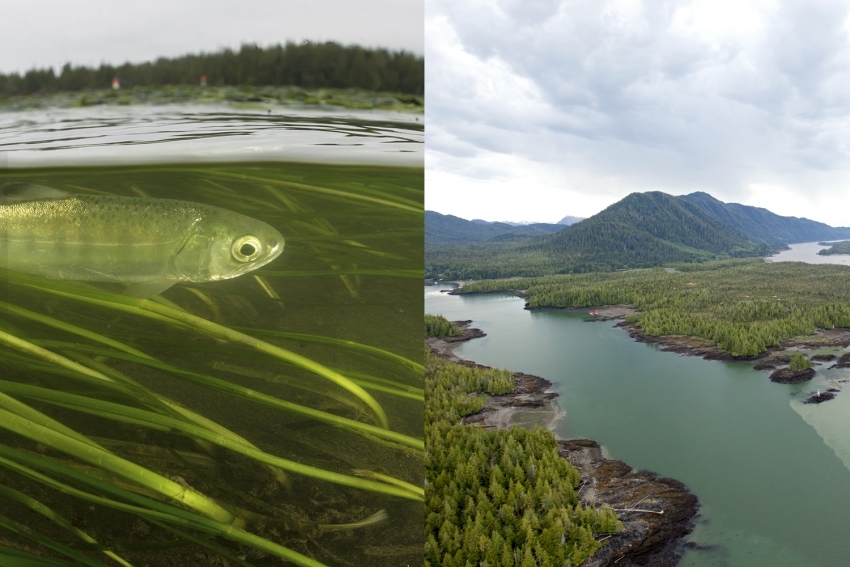 Juvenile salmon among protective eelgrasses of Flora Bank; and an aerial view of Lelu Island (where the Northwest LNG facility is planned) and Ridley Islands near Prince Rupert - Vancouver Observer file photos by Tavish Campbell and Brian Huntington respectively

A day after a Malaysia-led consortium announced conditional approval for a potential $36-billion liquefied natural gas project near Prince Rupert, there were more questions than answers about First Nations support, following a phone-in press conference held by Rich Coleman.

The Natural Gas Development Minister was asked Friday how the project could go ahead in light of the fact that the local Lax Kw’alaams band members rejected a $1-billion offer to advance the project. He replied that "virtually all" of B.C.'s First Nations groups affected by the $11-billion Pacific Northwest LNG project support it.
But  Grand Chief Stewart Phillips of the Union of British Columbia Indian Chiefs (UBCIC) is not buying into the project.
“The answer is no,” he told the Vancouver Observer. “If the Clark government and Petronas [the energy giant controlling the project] intends to disregard, disrespect and ignore the rights and interests of Lax Kw’alaams and other Indigenous groups, they will be looking at a multitude of court challenges.”

If approved, the new LNG terminal would be built on Lelu Island near Prince Rupert, whose surrounding waters are critical for rearing millions of wild B.C. salmon, according to a Simon Fraser University report.

Despite Phillips' opposition, Coleman maintained that his relationships with B.C.’s First Nations communities are “great” in relation to the project.

“There’s actually significant support around First Nations with regards this project and LNG in general,” he said. “So, I’m actually confident that the First Nations will sign, those that are still outstanding…. We’ll continue to work with them on their issues because that’s what we do.”

The CEAA will address conflicts with the sensitive ecosystem around the terminal, he said, and deal with any impact that may come to local salmon.

The environmental agency however, which has expressed concerns about the fate of wild salmon, has now paused its assessment of the project for a third time, asking for more information about Pacific NorthWest LNG’s 3-D modelling for the Lelu Island site.

Either way, these reports are of little consolation to Phillips, who doubts the strength and objectivity of the CEAA’s evaluation process.

“They have vacated the field in terms of environmental assessment and allowed the federal process to carry the ball,” he said. “So we have no great comfort in that process.

“Yet, at the same time, you an sense the hesitancy in that process, as weak as it is — they know and understand that opposition is very deeply rooted and entrenched when a group of greatly impoverished people reject a $1 billion.”

Though the project would indeed provide income, training and employment for thousands of people in the area including First Nations, it poses an environmental risk UBCIC is simply not willing to take.

According to a Globe and Mail report however, certain Indigenous bands, including Metlakatla, Kitsumkalum, Kitselas, Gitxaala, and Gitga’at, have expressed strong environmental concerns, but maintained their openness pending the results of further research and analysis on its impact.

See more
Christy Clark ready to support Kinder Morgan pipeline if her five conditions are met
PHOTOS: Will and Kate's action-packed day in Vancouver
Speak up about this article on Facebook or Twitter. Do this by liking Vancouver Observer on Facebook or following us @Vanobserver on Twitter. We'd love to hear from you.