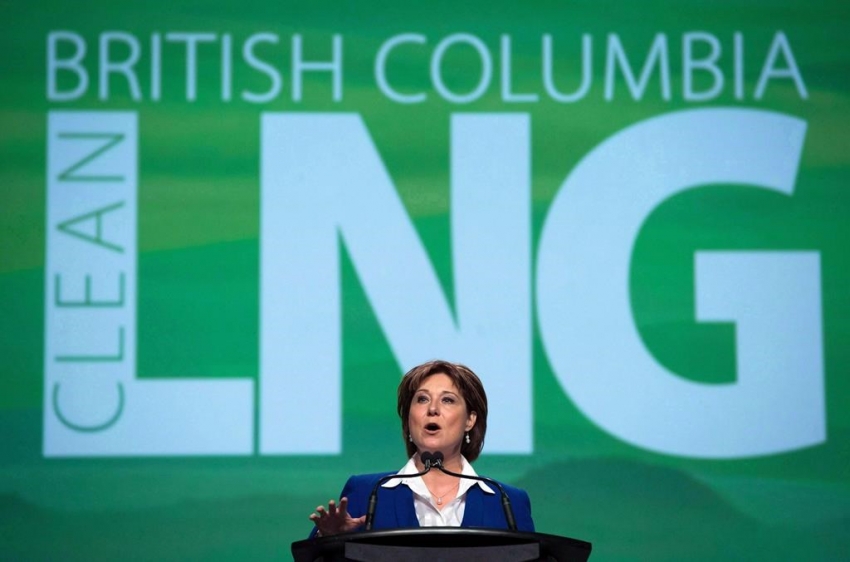 British Columbia Premier Christy Clark speaks at the LNG in BC Conference in Vancouver on October 14, 2015. File photo by The Canadian Press.

Premier Christy Clark's dreams of a booming liquefied natural gas industry in British Columbia have been dealt another blow after a Shell-backed venture delayed a final investment decision indefinitely.

LNG Canada's decision to put the project in Kitimat on hold amid weak global prices isn't surprising, but it adds to the pessimistic mood around the future of the sector in B.C., experts say.

"It just creates a dark cloud over what is already a bunch of dark clouds for that type of economic activity," said Martin King, vice-president of institutional research at FirstEnergy Capital Corp.

Clark made a massive political bet on LNG in 2013 with promises of 100,000 jobs and $100-billion in revenue over decades. Today, there are 20 projects proposed in B.C., but analysts say only a handful appear economically viable.

Among the more promising ventures was LNG Canada's proposal, which would export up to 24 million tonnes per year and cost up to US$40 billion to build. But CEO Andy Calitz told reporters Monday that it was simply too expensive for now.

King said the B.C. Liberals were not alone in their optimism three years ago. But weak Asian demand, a supply glut from the U.S. and Australia and the oil price collapse have all darkened the industry's prospects.

He said Japan is the world's largest LNG buyer, but it has been moving back toward nuclear power as it recovers from the 2011 tsunami. Meanwhile, U.S. natural gas prices have fallen along with shale gas supply growth, he said.

A good portion of global LNG that is traded is indexed against crude oil prices, so the oil downturn in 2014 and 2015 dragged down liquefied natural gas along with it, he added.

"It's not if, it's when," she said. "In my view, based on my understanding of global supply and demand, gas is needed. Gas has a bright future, and there is interest in what Canada's offering."

Canada is an attractive source because it has hundreds of years of surplus supply, relative political stability and offers 40-year permits through the National Energy Board, she said.

Natural Gas Development Minister Rich Coleman said in a statement the government remains optimistic about the future of LNG. He noted LNG Canada still described the project as a "promising opportunity."

The $36-billion Pacific NorthWest LNG project on Lelu Island is still under federal environmental review. The smaller Woodfibre LNG near Squamish has received environmental approval and a final investment decision could be made this year, said country manager Byng Giraud.

"Our business model's a little different, and we're a different size," he said. "Prices are a challenge. We are looking at ways of lowering our costs and improving our efficiency, but ... we're still bullish."

Michael Prince, a social policy professor at the University of Victoria, said he doubts the industry's failure to materialize will hurt Clark much during next year's election.

The province is in good financial shape without LNG and other issues, including affordable housing and education, are dominating the early campaign, he said. But the Opposition New Democrats could use the LNG issue to attack the Liberals.

"I don't think that this will be the ballot box issue in May 2017," he said. "I would expect it to be part of a NDP campaign to challenge the credibility or the believability of other claims or promises made by the governing party."

The government has pivoted somewhat from constantly touting the economic promise of LNG, but any good news in the sector would likely change that, Prince said.

"They're a bit like a moth near a bright light. If the LNG started to get brighter again, they'd be right back at it," he said. "That's their big hope, their big dream."