BC Green Party leader Andrew Weaver lashed out at teachers and critics over the weekend on twitter after reports of testy meetings with teachers and the B.C. Federation of Labour. 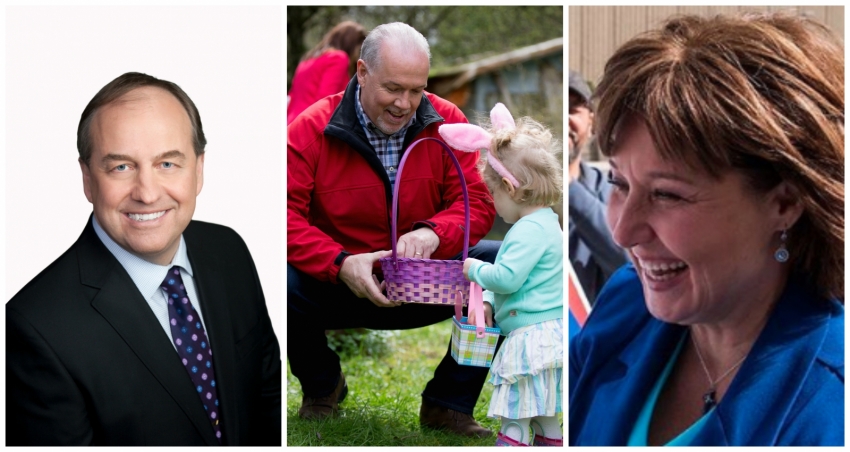 BC Green Party leader Andrew Weaver (left) was lashing out at critics on twitter over the Easter weekend while BCNDP leader John Horgan (middle) and BC Liberal leader Christy Clark (right) were out on the campaign trail. Photos: BC Green Party, BCNDP Flickr and BC Liberal Instagram.

It started with tweets about a meeting between Weaver and two Greater Victoria Teachers’ Association (GVTA) members that didn’t go well, according to teachers Katherine O’Connor and Robin Tosczak, who posted about it on Facebook.

They described Weaver dominating the meeting with his views on school choice and his frustrations with his son’s GVTA-member teacher that led to his decision to switch to private school. They said he expressed frustration with their union local and the B.C. Teachers’ Federation (BCTF) and that despite their efforts to change the subject “it was not possible to steer Weaver off of his personal narrative about bad teachers and the local and provincial unions.” Ouch.

BCGP staffers tried to redirect critics’ attention to the BCGP’s platform, but twitter and Weaver were having none of it. By Easter Monday heads were shaking (well, tweeters were tweeting, actually) amidst reports of another meeting gone wrong, this time between Weaver and B.C. Federation of Labour (BC Fed) President Irene Lanzinger, whom Weaver apparently thought was still president of the BCTF — a post she held ten years ago, prior to becoming the first woman to head up the BC Fed, where she represents 500,000 B.C. workers.

BC Fed Secretary Treasurer Aaron Ekman (@aaronekman) tweeted that the teacher meeting report mirrored the BC Fed experience with Weaver. “He just talks. Doesn’t listen.” “He talked for 30 minutes before we realized he thought he was at the BCTF office. Weirdest meeting.” 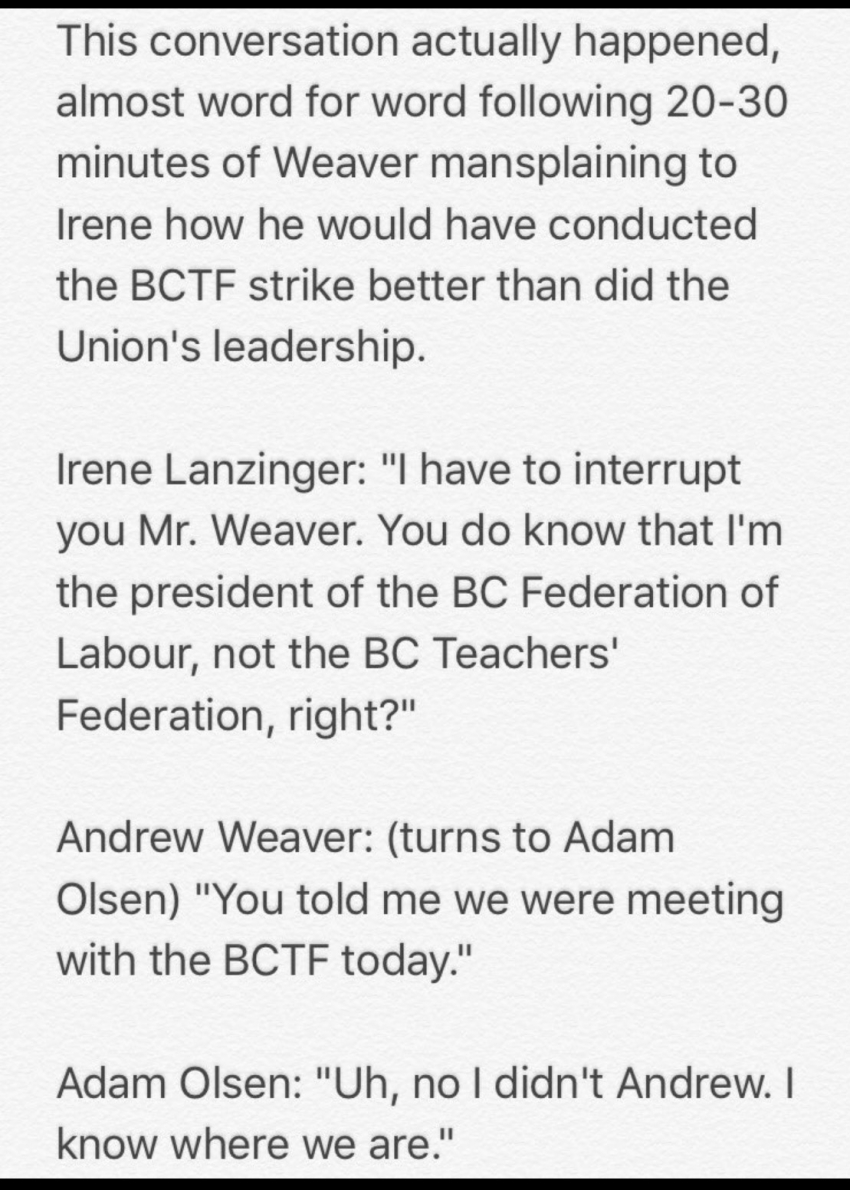 A few B.C. New Democrats (BCNDP) joined the fray after Weaver’s bizarre and bogus tweet claiming the BCGP “were the only ones speaking up and that is a matter of public record” regarding the 2014 teachers’ strike. Another @AJWVictoriaBC (Weaver) tweet claimed “Also, BCNDP were completely absent during last strike as I spoke out, organized petitions and worked hard to support public ed.”

Responses ranged from “OK, now you’re seriously going Trump here, Time to call it a day Andrew” (@unionwill) to “I don’t think he had a good night last night. I hope his handlers let him continue on twitter” (@MarkShaw24).

Whether B.C. needs another party leader who chooses private school for their own and seems to have an axe to grind with the BCTF is a question voters will be contemplating over the next few weeks.

And much as BCGP communications folks would rather talk about the party’s platform than the leader’s comments or tweets, the reality is voters care about leaders’ and candidates’ character traits, values and judgements as much or more than they do about platforms.

Voters know all about B.C. Liberal leader Christy Clark’s confrontational and controversial public education record and are unlikely to be swayed either way by the party’s lukewarm promise to review the funding formula and fund enrolment growth.

They’ll remember the bitter legal battle she started years ago as education minister, when she proudly led the stripping of the teachers’ contract. Finally ended by a decisive Supreme Court of Canada decision in the teachers’ favour last fall, Clark shamelessly touted the ruling as an opportunity to “invest in kids.” As if leading a government that had forced millions of school closures and spending cuts wasn’t.

Horgan and the NDP got a tweetload of great publicity in response to Weaver’s weekend tweets with supporters posting photos and recollections of him speaking at rallies and visiting schools, along with several former NDP MLAs who are running for re-election.

See more
A who's who of the candidates running in the Vancouver School Board by-election
New schools, seismic upgrades, French Immersion and band programs among issues VSB candidates to face in by-election
Speak up about this article on Facebook or Twitter. Do this by liking Vancouver Observer on Facebook or following us @Vanobserver on Twitter. We'd love to hear from you.