This is the third of a five part series, Southern Gateway: An American pipeline giant's plans for Vancouver.

With the BC government's release of a report on heavy oil pipelines on Monday, oil spills and pipeline leaks are coming under increasing public and government scrutiny. For some, the bigger concern is what happens when heavy oil leaks into the air.

This is one of the reasons Wilderness Committee campaigner Ben West is alarmed about Kinder Morgan’s proposal to “twin” the Trans Mountain pipeline -- the only up-and-running pipeline connecting Alberta’s oil sands to the West Coast.

“It’s not as if all these oil tankers don’t spill then everything’s still hunky dory,” said West.

In his opinion, a piece from the satirical Onion News Network put it best when it stated that there had been a horrible disaster because an oil tanker had actually successfully made its way to its destination and was now burning the oil and releasing carbon into the atmosphere.

“That to me was beautiful poetry,” West said.

Massive record-breaking flooding submerged the Canadian prairies throughout the summer of 2011. The year before, a giant iceberg four times the size of Manhattan floated towards Nova Scotia. Up north, buildings sink and roads buckle as the permafrost melts. It’s unprecedented events like these that make West feels the risks of more oil flowing through Vancouver include consequences for the whole world. 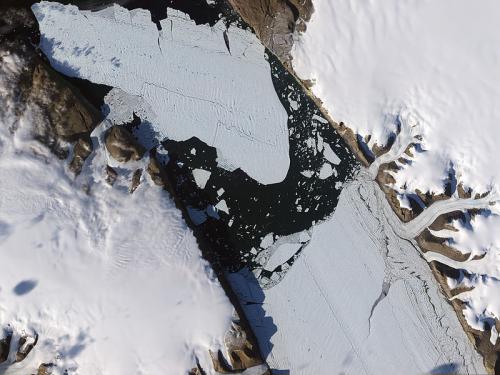 An iceberg four times the size of Manhattan that broke away from Petermann Glacier in the summer of 2010 is the largest known ice calving in Greenland's history. Photo credit: NASA Earth Observatory, 16 August 2010.

The company states that it will begin public consultations on their expansion plans in September and will apply to the National Energy Board in 2013.

West, 34, is working with veteran Greenpeace activist Rex Weyler to fight the transformation of Vancouver into a major artery of oil sands expansion.