You can't be for Canada and against Keystone, Minister Joe Oliver says 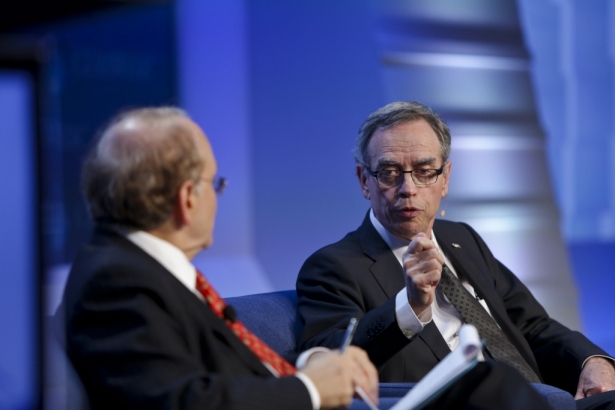 "It isn't helpful when a senior Member of Parliament comes down there either directly or indirectly to speak against a project that is in Canada's national interest," Oliver said.

Mulcair's visit south of the border, where he met with US business leaders and lawmakers, appears to be in reaction to Minister Oliver's recent tar sands greenwashing junket to D.C.

Oliver, who also spoke in Chicago and Huston, gave his American audience what he called the "unvarnished goods" on Canada's tar sands: they represent an "environmentally responsible," "greener alternative" oil supply for carbon-hungry U.S. markets. His tour followed on the heels of Alberta Premier Alison Redford's similar efforts to promote one of the world's dirtiest forms of energy as environmentally-friendly.

Tom Mulcair, it appears, has had enough with the misinformation.

The Canadian government, says Mulcair, is "playing people for fools" when it comes to Canada's environmental performance, especially surrounding the expansion of the tar sands.

"In the U.S. people know how to read," Mulcair said. "They know that Canada is the only country that has withdrawn from Kyoto. They know that the Conservatives can't possibly meet their Copenhagen targets (on greenhouse gas emissions) precisely because of the oilsands."

In response to Mulcair's claims, Oliver told media there is broad political and public support for the project in America.

"We know that there are some 58 U.S. Senators – Republicans as well as Democrats – that have voiced their support for the project and the latest poll indicated that 70 percent of the American people are on our side. That's not surprising because this project is in the interest of both our countries."

But the Canada-U.S. energy relationship plays out differently in Mulcair's mind. "We have never taken care of our energy security," he recently said in an interview. "We tend to forget that a 10-year supply to the U.S. is a 100-year supply to Canada. We are still going to need the energy supply to heat our homes and run our factories."

What is more, says Mulcair, Canada's Conservative government is exporting the country's natural resource wealth without heeding the social and environmental consequences. "Global warming is a real issue...we've got to start taking this seriously. The only country in the world that has withdrawn from Kyoto is Canada under the Conservatives."

"They are out of step with the whole planet," he said.