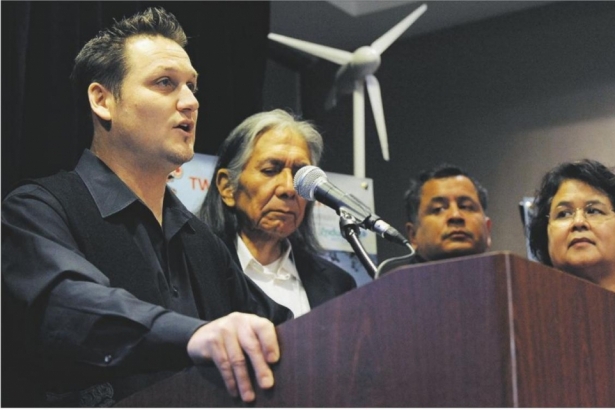 Tsleil-Waututh Nation is calling on Adrian Dix (MLA Vancouver-Kingsway) and the BC NDP to clarify that a “made in B.C.” assessment of the Enbridge Northern Gateway pipeline would also apply to Kinder Morgan’s Trans Mountain pipeline project. The Nation opposes the Kinder Morgan pipeline, which would terminate in the heart of their territory.

“We commend Adrian Dix’s decision to withdraw from the federal government’s Enbridge Northern Gateway review process. We, too, feel that the federal process is flawed,” says Chief Justin George of the Tsleil-Waututh Nation. “However, his announcement falls short. We need to know if the NDP’s proposed assessment would also apply to Kinder Morgan’s plans.”

“As more and more British Columbians are learning about Kinder Morgan’s pipeline proposal, they are expressing their opposition,” says Gabriel George, Sacred Trust Manager, Tsleil-Waututh Nation. “Considering that we have voiced our concerns to the B.C. NDP on several occasions, we are disappointed that they did not also address Kinder Morgan’s pipeline in their announcement.”

Also lacking in the announcement was mention of First Nations’ legal rights.

“Governments have a legal obligation to consult with First Nations,” adds Chief George. “Should the B.C. NDP form government, we look forward to working closely with them to ensure that meaningful government-to-government consultation with First Nations occurs.”

Tsleil-Waututh Nation supports sustainable economic development and encourages all citizens to call upon their elected leadership to focus on finding green, sustainable alternatives to our energy needs. After serious consideration, Tsleil-Waututh decided to oppose Kinder Morgan’s pipeline project. The Nation has experienced the results of crude oil handling and refining on Burrard Inlet for a number of decades. The risks associated with the pipeline are just too great for the Nation to accept.

“Kinder Morgan is proposing that we become an oil port city. Oil port cities throughout the world become waterway dead zones,” continues Chief George. “This is not just a First Nations issue. People from all backgrounds enjoy Vancouver’s great quality of life. We need to unite to protect this environment for all of our future generations. We are as much alive as we keep the earth alive.”