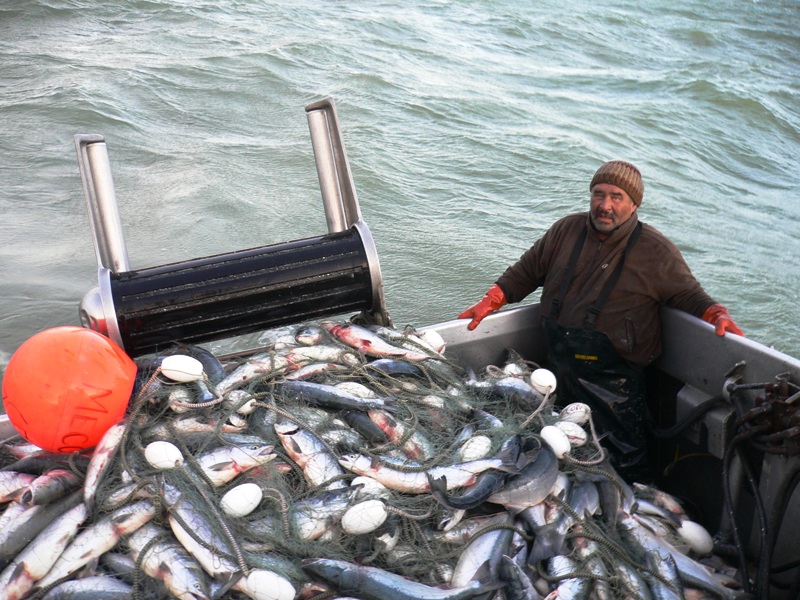 “It’s a wild salmon economy here,” said Taylor Bachrach, the Mayor of Smithers, in describing the Bulkley Valley. “People fly here from all over the world in October and November to fly fish for steelhead. The First Nations have an in-river fishery with traditional sites at Babine Lake and other places. People still dip net for salmon. Closer to the ocean, there’s the marine commercial fishery.”

“We share the same watershed from here all the way up to Prince Rupert,” he continued. “Salmon tie the fate of all of these communities together.”

According to Coastal First Nations Executive Director Art Sterritt, an oil spill on BC’s north coast could cost the province 56,000 jobs. An estimated 26,000 fishing and fish processing jobs directly depend on a clean marine ecosystem. About a fifth of those belong to First Nations. The Gitga’at, one of many First Nations dependent on coastal resources for subsistence, estimates replacement value of its yearly traditional harvest at $2 million per year. In Old Massett Village on Haida Gwaii, about 60 per cent of the food still comes from the sea.

A promotional piece from the BC government in 2005 stated that BC’s ocean economy creates 167,805 jobs and $7.6 billion in labour income. A 2006 study commissioned by the Northwest Institute for Bioregional Research found that the Skeena River wild salmon industry generates up to $110 million per year. This amount includes revenue from recreational tourism, sport fishing, commercial harvesting, wholesale values, value added processing, retailing, value to First Nations and values to Alaska (many salmon caught in Alaska spawn in the Skeena).

About seven fish processing plants have closed in Prince Rupert in recent years, but fishing is still a major economic player in the northern economy. Arnold Nagy estimates about 1000 jobs during salmon season at the Canadian Fishing Company processing plant where he works as a millwright. He estimates about 700 licenses for gillnetters and seiners to fish the northern waters, more for the trawlers. There are crab, urchin, shrimp fisheries and clam openings as well. People buy materials and supplies in the town. There are two fish processing plants in Massett, on Haida Gwaii. Tourism and steelhead fishing are other job generators that would be lost in the event of a spill.

“Myself as a tradesman working in the plant year round I make a pretty good living out the fishing industry,” Nagy said. “If there’s ever a spill, there’s nothing to do but go to the bank and say I’m bankrupt, how do you want to deal with this? Because there’s no way that I’m going to be able to pay the bills.”

Doug Donaldson, MLA for Stikine Valley, views wild salmon as a treasure worthy of a fight. He told the Joint Review Panel during intervener testimony in Smithers that wild salmon habitat deserves local, regional, provincial, national and global protection because there is nothing like it remaining in the world.

According to Pat Moss, coordinator of the Smithers-based coalition Friends of Wild Salmon, the threatened Skeena salmon fisheries have brought together commercial fishermen, sport fishermen, First Nations and environmentalists. The group successfully banned fish farms on the north coast. Then it turned its attention to the Sacred Headwaters, a basin where three major BC rivers originate, the Skeena, Stikine and Nass, and turned back a coal bed methane development there. Now the focus is keeping the major salmon rivers free of risk from pipeline spills. The proposed pipeline route runs along the Morice River for 34 kilometers, an inaccessible stretch of river with excellent areas for salmon spawning and rearing that is also prone to landslides.

Nagy described it this way: “If you have an accident on the pipeline in those stretches where it goes over and under Skeena River tributaries, the oil will end up in the Skeena River and come all the way down here to Prince Rupert. Fish from the Nass and Fraser Rivers all migrate along the coast before they head out to the ocean to do their loop out there. Then they head back down along the Aleutians all the way down from Alaska back here again. They’ll all be affected by any oil that washes down the river to the ocean.”