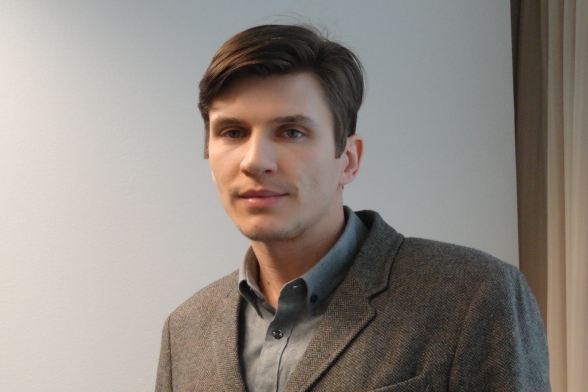 Enbridge Joint Review Panel once again heard from Vancouver intervenors today who spoke eloquently and passionately, making references to devastated livelihoods and coastline following the of Exxon Valdez oil spill,  climate change and risks of a bitumen spill considered too large to take.

Repeatedly interveners called on the panel to reject the proposal, while at the same time, a number of speakers said they believed it was inevitable that Harper's cabinet would override the decision, if the Joint Review Panel were to vote to stop the pipeline slated to run from the Alberta tar sands across British Columbia to Canada's wild and pristine westernmost coast.

"I urge this panel to turn away form a path …that leads us to a path of climate suicide,"  said Ann Pacey of On Common Ground Consultants at the end of her statement.

Speakers who were watching the hearings in the next room

This morning's review by the Energy Board's panel took place in a quiet room, removed from crowds watching at a hotel many blocks away.  The quiet was temporarily disrupted by the shrilling of whistles, as five demonstrators crashed the review panel meeting wearing t-shirts protesting the pipeline.

Laura Cornish described herself as an ordinary Canadian.  She grew up in Toronto, went to school in BC.  As a child she said she was awestruck by the British Columbia coastline and thought to herself she would move back someday and "make a life for myself."

She fulfilled her childhood dream and worked for the British Columbia  provincial government, creating climate change targets, worked at UBC on climate change and said she takes every opportunity to get out on the coast.  She still recalls the first time she saw her first salmon run with clarity.

In preparation for this hearing, she said she reflected on the project, on her future and on her children.

"It's an understatement to say I'm concerned about what would happen if this project goes forth."

"We all learned in kindergarten you can't put Humpty Dumpty back together again…" Cornish said.

Onni Milne: "One oil spill, and that's all its going to take, and there will be no supernatural BC."

Onni Milne told the panel she was proud to be on record to "say no to this proposal, to say no to Enbridge."

The BC government and Tourism BC have spent millions of dollars publicizing supernatural BC, she said.

"One oil spill, and that's all its going to take, and there will be no supernatural BC."

"My first concern is all about  oops  and incompetence on oil pipelines.  I thought in business if you proved you were incompetent you were no longer in business. Apparently that doesn't apply to oil companies.  That applies to the Exxon Valdez Oil Spioll, the BP oil rig, and the Shell oil rig that recently became loose in the ocean. Incompetence.  The Michigan Kalamazoo spill and Enbridge's actions. Enbridge failed to adequately address well-known corrosion problems as far back as 1995.  This is in competence."

"What more can you say?  Incompetence," she said

"I believe the agreements are not worth the paper they were written on.  My understanding there are people who were affected by the Exxon Valdez who are still waiting for this rcompensaion twenty years later.  This is an outrage."

Karl Jensen: "At this time of my life I have no time for your misleading statements."

Karl Jensen said he makes video games for a living.  When he first began hearing about the Northern Gateway pipeline proposal he said he didn't know much about the project.  So he began to inquire.

"I asked my colleagues but they knew about it in name only, as a result of the lack of information in the mainstream media.  I approached my mother who is a retired economist. Initially, she didn't know much about it but she had the time to research it and we discussed it over dinner and I began to be able to form an opinion. In July of last year  I was able to take a two week trip to Haida Gwaii with eight of my friends.  This trip further reinforced my belief that we must protect the delicate ecosystem in that area."

Jensen cited the rising cost of oil in Canada if the pipeline goes through, job loss in Canada, dependency on foreign oil instead of using Canadian oil resources, and more for why he came to oppose the project, after learning about the economics of it.