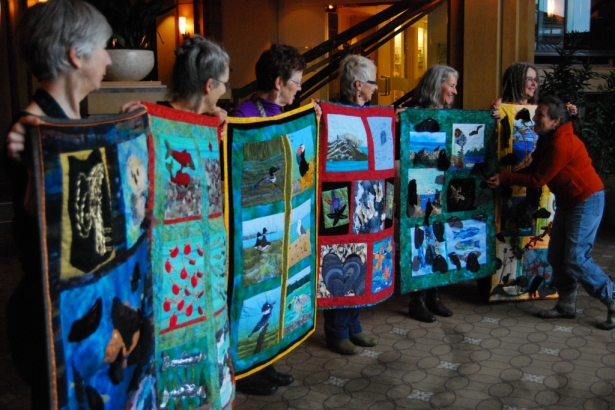 A few speakers were losing patience.

Victoria resident Jane Mertz spoke out against instructions she received to avoid repeating what other speakers have already said.

“I believe if I agree with what’s being said, I should repeat it to make sure the message is heard,” she said. “Enbridge is allowed to repeat itself.”

“Really, I feel your decision is more whether or not to respect the democratic process and pass on the wishes of the people of British Columbia more than anything else.” The waiting room was packed for most of the day, with people arriving early to watch the proceedings and staying long after they’d given their statements.

A block of six speakers in the morning session represented the Positive Energy Quilters, a group committed to raising awareness and money to protect the coast through making quilts. Each quilt is made of individual squares representing different aspects of BC life. Kristin Miller expressed disappointment on behalf of the whole group that, after preparing their talk as a group they were told they could not present together because the room was too small.

Quilter Mary Wilson said she first approached the process with great faith, but has become disillusioned.

“I wonder what have we learned from this National Energy Board review process?” she asked. “We’ve learned the review process designed to protect the environment can be changed quite arbitrary and your decision can be overturned.”

Peter Nix told the story of how he explained to his teenage son why he was participating in the anti-coal protest in White Rock last year and the possibility of his being arrested. His voice began to break when he told the room about bursting into tears, starting to explain his emotional response, when his mic was cut.

Early in his career, Nix was trained by Suncor as an expert witness, but quit the industry altogether, he said, after discovering how dishonest his employers were. He said a report he authored on mine reclamation was modified without his consent to make it look the project was a guaranteed success.

“I never said that. I had an epiphany and I quit,” he said, adding that it was nearly impossible to tell the truth if that truth contravened the company line. “I think that tell you something about the mentality of the industry.”

He was the only presenter to offer any sympathy for Enbridge employees.

“I worked for Big Oil for 40 years. They’re not stupid, they’re not mean. They’re ordinary people doing a job. They know that climate change is going to make the fossil fuel industry redundant. But there’s so much pressure.”

Dr. Genevieve Hill, who graduated recently from Exeter University with doctorate in wetland archaeology, said it’s incumbent upon everyone involved in reviewing the pipeline project to value the cultural and social experiences of the presenters—and the words they use to express them—as highly as the scientific evidence put forward.

“It is impossible to divorce ourselves from culture, and it is folly to believe that knowledge gained through science is more valuable than people’s cultural beliefs,” she said. “It is impossible to measure how people will react to a given situation, and so as you proceed with these hearings and as you reflect on those past, I urge the panel to consider how deep the influence of society and culture permeate all aspects of this project.”

After four days of hearings on the Enbridge Northern Gateway pipeline, these speakers  used up a chunk of their precious ten-minute slot to criticize the review process.

Sustainable energy consultant Thomas Hackney was unimpressed by the treatment he received upon his arrival at the Delta Hotel.

“In my affirmation I was asked to make some sort of statement that I would not harm the security of any one else involved in this proceeding,” he said. He referenced the cancelled hearing at Bella Bella in April when the panelists were greeted by a large crowd of protesters, and said it was regrettable that they failed to recognize the peaceful demonstration as just another means for those affected to express themselves.

“Frankly I got the impression that these security measure were more theatrical in nature than substantive.”

The mic was cut again and again as self-professed “average” British Columbians gave examples of the threats to their home that have prompted them to take direct action. Men in business suits and soft-spoken grandmothers talked about the Clayoquot Sound protests 20 years ago and the rail blockade in White Rock just last May, telling stories to illuminate the commitment their communities have shown in the past to projects that threaten the landscape. These histories were irrelevant according to panelist Sheila Leggett, who told speakers that descriptions of civil disobedience were not useful to the panel.

Panelists are not permitted to give interviews during the review process, but Joint Review Panel spokesperson Ruth Mills said it’s left up to the three of them to decide what is relevant information and what isn’t.