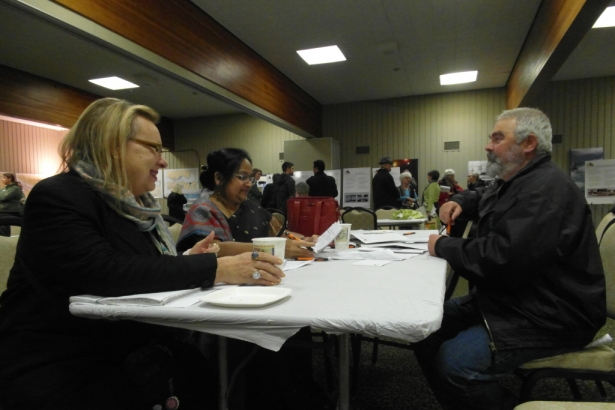 There were two parallel realities at the Kinder Morgan public meeting Tuesday night. Outside the PNE administration building, people set up a tent in the rain to show their vehement opposition to the Kinder Morgan proposal which would double the capacity of the Trans Mountain pipeline that transports Alberta bitumen to Canada's west coast. Inside, however, a sunny optimism prevailed. At times, the room seemed populated by more company employees than ordinary Metro Vancouver residents.

Kinder Morgan Canada's director of engineering Michael Davies said that he hadn't spoken directly to any of the people who came to the session handing out flyers opposed to the pipeline expansion. He said a big part of what Kinder Morgan was doing was trying to understand the community's concerns.

"With a big project like this, there's going to be some controversy about it, and we respect that. As part of the process we'll go through to make sure as many of those concerns are addressed as we can," he said.

As Kinder Morgan opened the doors to its public information session, environmental advocacy group staff and volunteers set up their tent outside with banners, brochures, and newsletters.

Throughout the three hour drop-in information session, green-clad Trans Mountain employees and people handing out brochures against the pipeline walked around the room, painting two very different pictures of the controversial pipeline proposal.

"The Trans Mountain pipeline was originally built in 1952 to ship Alberta light crude to refineries in the Vancouver area, for use by Canadians. That is not what the pipeline's new owners, ex-Enron American billionaires Richard Kinder and Bill Morgan, are doing with it. They are converting and expanding the pipeline to export unrefined tar sands bitumen, primarily to Asia, for increased profit. This is NOT 'business as usual.'" reads one flyer from the tent.

One of the sections in the 30-page Trans Mountain Discussion Guide describes in bullet-point form the many benefits for Canada and BC, such as boosts in oil prices, an "important boost" to the BC and Alberta construction industries, "investments and advancement in areas such as pipeline development and spill response."

On one point, both sides seemed to agree: the second Trans Mountain pipeline would be geared specifically to meet growing demand for oil across the ocean.

"The proposed Trans Mountain Expansion Project will allow Canada to promote its resources on the oil market where oil commands world pricing," stated the Trans Mountain Discussion Guide on page 17.

Not clear how photos, video taken at public information sessions will be used

"Please note video and photography will be taken at tonight's session for use in project materials," was written on a whiteboard, below a welcome message and a list of the groups and organizations present to answer questions.

The session was part of Kinder Morgan's ongoing public relations blitz before officially applying to the National Energy Board (NEB) to construct a second pipeline and pumping stations from Edmonton to Burnaby. The new pipeline would mostly transport bitumen, or heavy oil, from Alberta oil sands to be shipped from Vancouver's ports to meet growing demand from overseas markets. Kinder Morgan has stated that it plans to make an official application to the NEB in late 2013.

When asked what the photos and videos will be used for, a spokesperson said she didn't know what they would be used for exactly.

"We're even taking photos and footage of some of our people tonight because we don't have them," she added.

Residents concerned about the prospects of an oil spill said that the informational placards, folder, and the Trans Mountain expansion project staff did not provide adequate information, nor did it satisfy their desire for a public forum-style format.

"I don't think this is a public consultation," said Purnima Gosavi, a Vancouver resident. She sat at a table in the centre of the room where people were invited to sit and fill out feedback forms. Gosavi was one of the eighty eight people who signed in to the three hour session, by Kinder Morgan's count.