Safety precautions for tankers, spill clean up, "worlds away from what it needs to be," environmentalist says 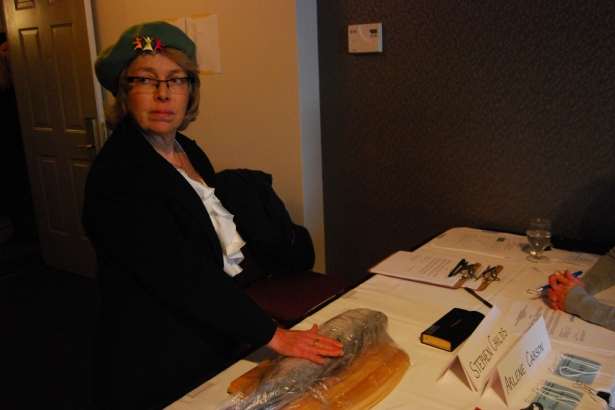 Professor Anne Carson swears on a salmon before giving her statement before the Joint Review Panel in Victoria on Saturday. Photo by Erin Flegg.

When science professor Arlene Carson learned she would be sworn in at the Enbridge Joint Review Panel hearings, she thought hard about what she wanted to swear on. After considering what would be most sacred in this context, she said the answer was clear.

“The salmon is what’s worthy of respect and spiritual recognition in the context of these hearings. It really affirms the interconnection between all species on the planet and our need to recognize that.” Carson and her daughter arrived at the Delta Hotel with a whole, frozen wild salmon, covered in plastic wrap. Before entering the hearing room, she put one hand on the fish and swore that the testimony she was about to give would be the truth.

While Idle No More protesters gathered at the Coho Ferry Terminal and at the Peace Arch at the border between the US and Canada, Carson and 19 other speakers appeared before the Enbridge Joint Review Panel to lay out the myriad ways they believe the Northern Gateway pipeline would devastate the province.

“Boasting that your tankers are double hulled is a bit like boasting that your car has seatbelts and brakes,” he said, adding that double-hulled tankers have been required in Canada since 2010.

“It’s clearly worlds away from what it needs to be.”

Economist Gary Holman also said that the level of risk involved in Northern Gateway is unacceptable. He said if all Canadians were fully informed, they would expect to the panel to recommend against the pipeline.

To illustrate the inevitability of a spill in spite of Enbridge’s proposed safety precautions, new father Karl Hardin described the many preparations he and his wife made so their son could be born at home. They enlisted the help of midwives and doulas, and attended pre-natal classes, only to end up needing a trip to the hospital for an epidural and a Caesarian section.

“We had never imagined that all of our best-laid plans would be for naught.” He said he believes some things are just out of human control, and an oil spill is one of them.

“We will be as powerless in the face of that event as I was to help my baby come into the world,” he said. “There is no technology in the word that can clean up an acceptable amount of oil in my opinion.”

Brooke Wilken, pregnant with her first child, traveled ten hours from her home in Quesnel Lake to ask why the panel would even consider approving further development of "dirty oil sands energy."

“We have brilliant grad students coming out with many different options at a staggering rate and they need the seed money, so why are we putting the money into something we know is both dangerous and limited?”

After setting out her detailed research on the effects of volatile organic compounds and carcinogens found in crude oil on her developing fetus, she closed with a simple request:

“Please help me to raise a child who’s free to play in safety and heath, who understands the sacredness of the earth, who knows to ask elders for advice.”

Timothy Trebilcock, a transplant from Ontario, said that a trip to Afghanistan in 2006 as a welfare support clerk for the military opened his eyes to a better way to build Canada’s economy.

“I found the food that [Afghan people] prepared for me on comparatively little money was far superior to the military mess fare which had the advantage of million-dollar facilities.” He said the lack of correlation between the money invested and the value of the end results made him reconsider the way Canada’s economy functions.

“When I returned to Vancouver, I saw our economy in a whole new light,” he said.

“I’ve always said to people who visit me here that the palpable sense of human history that exists in European cities exists here in the landscape.”