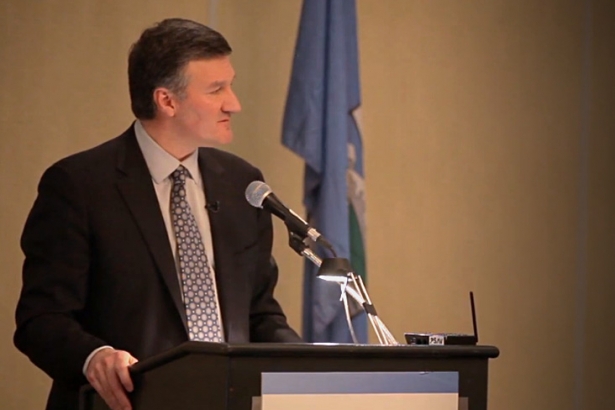 You've heard the names. You've seen the headlines. But what, exactly, is Enbridge – the key player behind Canada's most controversial industrial proposal?

When crude suddenly gushed from an oil well in Leduc, Alberta on February 13, 1947, the dramatic story of the province's 'black gold' rush kicked into high gear – a story, it turns out, that is deeply enmeshed with Enbridge itself.

In light of today's political debate around the Northern Gateway project, it's a surprising historical coincidence that the first pipeline to transport crude out of Alberta was built by Enbridge's predecessor – and its valve cranked open by the one-day leader of the federal New Democratic Party (NDP), Tommy Douglas.

“An historic occasion,” Douglas, then-Premier of Saskatchewan, proclaimed breathlessly at the pipeline's 1950 inauguration. “A modern miracle.

“The pipeline presents a steady, sure supply of oil with regular delivery at lowest possible transportation cost... Ten years ago, if anyone had dared suggest the possibility of completing a project of this size in less than six months, he would have been called a dreamer and a visionary.”

“The full effect of the benefits to the Canadian economy will not be felt until the line is completed,” predicted Loren Kahle, the company's executive vice-president.

Those alleged economic benefits are the very ones being lobbed back-and-forth today between federal Conservatives and the New Democrat opposition in the escalating fight over Enbridge's Northern Gateway Pipeline.

Sixty-six years after the Leduc discovery, Enbridge Inc. has become a leading Calgary-based company with a sprawling reach extending across the continent. Best known for its work in oil and natural gas transport, it's also branched out to greener alternatives, operating seven wind farms in Canada and the U.S., a geothermal project, and, until last year, the world's largest solar power plant. Although environmentalists disagree, the Enbridge website claims the company is one of Canada’s “Greenest Employers.”

Established in 1949 as the Interprovincial Pipe Line (IPL) Co., the company’s original pipeline ran from oil fields in Alberta to refineries in the east – on the shores of the Great Lakes and down to Wisconsin in the U.S.

Today, Enbridge operates the longest crude oil transportation network on the planet, moving over two billion barrels per day and transporting 65 per cent of all western Canada’s oil exports. It controls more than 24,000 kilometres of pipeline across North America.

And though it would form only a small part of its operations, one of Enbridge’s most high-profile projects is the proposed Northern Gateway pipeline. Planned to run from northern Alberta to the coastal community of Kitimat, B.C. – where oil would be loaded on tankers for shipment overseas – the proposal has drawn the fire of many First Nations and environmentalists alike.

The proposal has become the company's most controversial project – and the focus of growing political storm whose resolution is uncertain.