@EnbridgeNGP tweeted Vancouver-based writer John Vaillant, Bill Hillier and others with a link to a newly updated page on the Northern Gateway website titled: "Diluted bitumen in sea water -- some basic science". 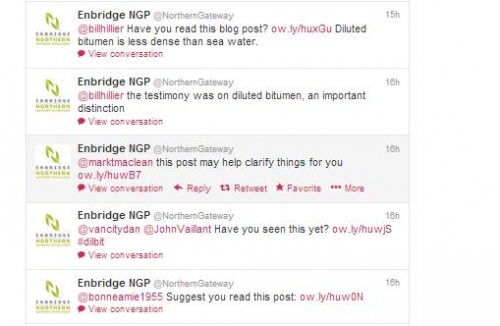 On the website, Enbridge Northern Gateway addresses the questions asked during the Joint Review Panel hearings in Prince Rupert around diluted bitumen, and assures that "crude oils, including diluted bitumen are less dense than water and therefore float."

"Project opponents have said that diluted bitumen sinks in open water and is therefore next to impossible to clean-up. This isn’t true and there is no evidence on the record to support this claim."

"It is important to understand the physical properties of water and oil, because these properties determine how the two liquids will behave when they come into contact."

The post referenced Dr. Alan Maki (an Exxon scientist at the time of the Valdez spill), who testified at the JRP hearings in Prince Rupert on February 5. He told the hearing:

“It's fundamental physics that everything has a specific gravity relative to water. Water is 1.0. All the compounds we're talking about range from .75 up to .92, .93. It is an immutable fact of physics that they will float.”

Critics including ForestEthics campaigner Niki Skuce fired back, disputing the claim by referencing the 2010 Enbridge pipeline spill in Michigan, during which bitumen leaked into the Kalamazoo River.

Last July, EPA Incident Commander Ralph Dollhopf told Michigan Live about his experience with submerged oil during the cleanup of the Kalamazoo River:

"This was the first time the EPA or anyone has done a submerged cleanup of this magnitude. I would never have expected... that we would have spent two or three times longer working on the submerged oil than surface oil... I don't think anyone in industry anticipated that."

After some individuals lobbed questions to Enbridge Northern Gateway asking about diluted bitumen and what happened during the Kalamazoo spill, the company tweeted to a group of conservationists and scientists @Raincoast Conservation Foundation:

"We've not claimed bitumen floats. We've described the conditions necessary for oil to sink and given evidence that dilbit floats."

On the new web post, Enbridge Northern Gateway acknowledges that oil (including bitumen) can sink when spilled into moving bodies of water such as oceans and rivers, but that "agitation" of the water can cause the oil to float to the surface, and that this was effective in the cleanup of the Kalamazoo spill.

It also said that cleanup was ongoing, and that the company has not been ordered to dredge the Kalamazoo River as of yet.

Check back for updates. To learn more about the proposed Enbridge Northern Gateway pipeline controversy, read "Extract: The Pipeline Wars."