To avoid repeating the statements of those who came before them, many speakers cut to the chase: No pipelines. 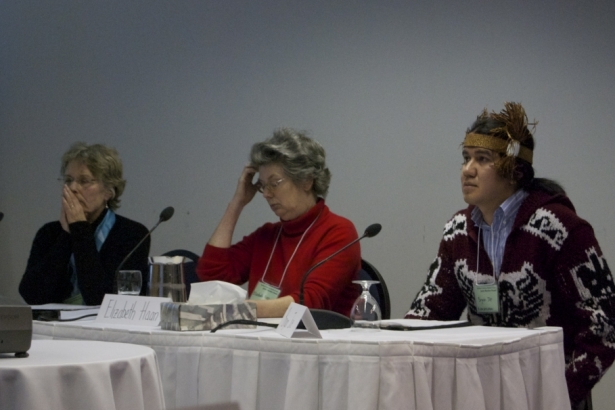 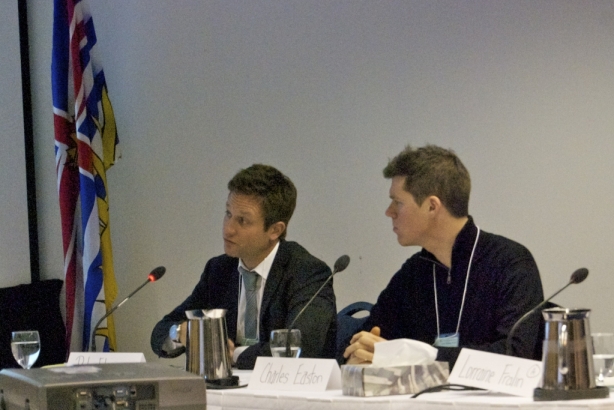 Drumming and chanting could be heard through parts of the hearing, coming from a small group gathered outside the Sheraton Wall Centre. Photos by Erin Flegg

Nicholas Read opened his statement at the Joint Review Panel hearing this evening with a few facts about himself, first telling the panel that he teaches journalism at Langara College.

“I’m also 57 years old,” he said. “And you’re probably asking yourself why I’m telling you this. The reason is that, when you are 57 years old, you’ve reached an age where you realize that very few things in life are all or nothing. All good, all bad. Black or white. However, to coin another cliché, there’s always an exception that tests the rule. And this pipeline project tests this rule. It is all bad. It is all wrong.”

With a nod to the rabbi coincidentally sitting next to him, he recounted to the panel an old Yiddish proverb.

The rabbi was David Mivasair, of Vancouver.  Mivasair wanted to help the panelists with their decision by sharing some ancient Jewish wisdom. The story he told was written about 2000 years ago, he said, by members of an agrarian society.

“They have a story that says when God created Adam in the Garden of Eden, God took Adam around, showed him all the trees and said to Adam, behold how beautiful is my creation. Do not ruin it, for if you do, there’s no one to come after you to repair it.”

“To think that people had that kind of wisdom long before they even had the capacity to ruin creation is sort of astounding," he said.

Dr. Farah Shroff, a science professor and mother marveled at the solidarity the Enbridge Northern Gateway pipeline proposal has created.

“We also know there’s a very exciting movement going on right now called Idle No More and they’ve also expressed a very strong interest in keeping their lands clean,” she said. “I’ve never really seen this kind of unity. Almost everyone I’ve spoken to, no matter where I’ve gone, are completely against this pipeline.” She pointed to multiple surveys in different industries, including one commissioned by the Gitga’at Nation of Hartley Bay and one by Enbridge, that all concluded a majority of British Columbians are opposed to the pipeline. She said consensus among the scientific community is also extremely telling.

“When scientists from different disciplines and different ways of looking at the issue can come up with a 100-percent conclusion that we’re going to have a pipeline spill or a tanker spill, possibly both, that’s actually saying a lot.”

Rob Fleming, MLA for Victoria-Swan Lake and environment critic for the official opposition, expressed his disappointment that Christy Clark and the BC Liberals failed to provide either a written or oral statement to the review panel.

“A province like BC, with a civil service and expert scientists across many agencies like the Environmental Assessment Office … with all of that at its disposal it’s incredible to me that it wasn’t done.”

Marilyn Suddaby told the panel she was here because she had lost faith in politicians to protect the environment, and she criticized Enbridge for contributing to already high levels of pollution in other countries.