Buzz kill: discoveries about the health of BC's bees 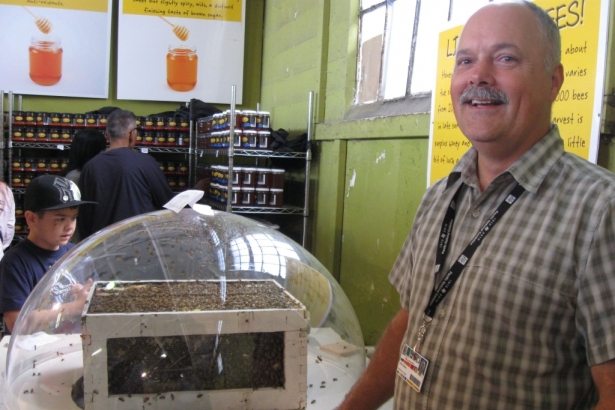 John Gibeau, president of the HoneyBee Centre at this years PNE fair

In 2006, California's bee community noticed a phenomenon described as colony collapse disorder, in which honey bee colonies weaken and die for no apparent reason.

The phenomenon remains a concern as the causes are poorly understood. And while colony collapse has not been a major issue for the health of honeybees in British Columbia, it has increased local awareness and interest in bees' health.

“In Canada there are only a few true causes for bee die-offs,”  Dr. Foster, associate professor for the Department of Biochemistry and Molecular Biology, said.

Dr. Foster noted that the biggest culprits in bee deaths are the Nosema apis fungus and the Varroa mite.

“The mites are only half the problem.” said Dr. Foster. “The bigger problem is the viruses that come with the mites.”

The Israel Acute Paralysis Virus and the Deformed Wing Virus are the best known of these viruses.

The mites are also starting to gain resistance to treatments, which is where Dr. Foster's lab comes in.

Their research focusses on an aspect of bee behaviour called social immunity, which examines the hygienic behaviour used by bees to clean up their hives.

According to Dr. Foster's research, the cleaner a colony is, the healthier its bees are.

Armed with this knowledge, their goal is to develop a diagnostic test that allows beekeepers to get away from using a large chemical cocktail and instead breed a more hygienic bee.

For the local beekeeper the story is more complicated.

“Hygienic bees are the future for breeding bees that are disease resistant, but we are not there yet,” commented John Gibeau, President of the HoneyBee Centre. “There are no large breeders in the world that are known for hygienic bees.”

Bees are currently being bred for production and winter survivability. A large number of bees are lost over the winter months and the loss is made up by dividing the colony, but the population is weakened and there often is not enough honey left to be harvested.

“The Ministry of Agriculture staff carries out a Winter Colony Mortality Survey each spring as the winter season causes the greatest mortality,” said Paul van Westendorp, the Provincial Apiculturist.  “But by the time colonies are first examined in the spring, it is often no longer possible to determine the cause of mortality.”

In the bee business death is a big deal. A catastrophe can hit an apiary (bee yard) and ruin the whole operation.

“In the 80's whole apiaries would die because of an unidentified illness that killed all the bees” reflected Gibeau.

Thanks to recent research the threat of a catastrophe is less daunting and the Ministry’s Apiculture Program works at keeping the treat low by delivering extension services to BC beekeepers that include apiary inspection services, training courses and educational extension materials. The Apiculture Program also administers the Bee Act and its Regulations which are directed towards the prevention of disease introduction and to mitigate their impact on the honey bee population.

If bee health is poor, not only is honey production affected but crops that depend on bees for pollination suffer.

In British Columbia, the main crop in question is blueberries, and though it is difficult to measure the effectiveness of a hive or family of bees success in pollination, it is known that a stronger family will have more success.

The HoneyBee Centre is Canada's number one berry pollinator. They rent out bees for pollination for about $85 per family of bees for a blueberry crop. Try as hard as they might tough BC's bees can't keep up.

“There aren't enough bees in British Columbia to pollinate just blueberries,” noted Gibeau. “BC has maybe 40,000 bee hives and I think it could use 400,000 hives easy.”

While times could be better for both bees and their keepers, the future seems to offer some signs of hope.

“The demand for bees are up,”  Gibeau siad. “There is a need based on flowering plants and the price of honey is highest is has been in a long time.”

As research continues, more can be done to protect bee health and ensure that plants and honey lovers will get more bees back working for them.