This is the fourth of a five part series, Southern Gateway: An American pipeline giant's plans for Vancouver. 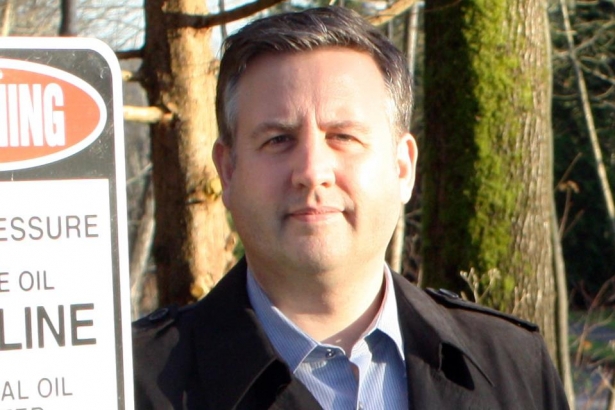 Burnaby-Douglas MP Kennedy Stewart has a close eye on Kinder Morgan's plans for expanding the Trans Mountain pipeline which will run through his riding. Photo credit: Kennedy Stewart's Facebook page.

Burnaby-Douglas MP Kennedy Stewart is keeping a close eye on Kinder Morgan’s plans. The Trans Mountain pipeline goes right through his riding. He’s brought the issue up in the House of Commons and wants to ensure that a thorough consultation process and environmental assessment goes through.

He commissioned a map detailing the pipeline's route in his riding in order to make his constituents aware that their homes could possibly be in jeapordy if the National Energy Board decides to expropriate them for Kinder Morgan's expansion of the Trans Mountain pipeline.

Expropriation would be an extreme case, he said, but it could be a possibility.

An interview with Kennedy on CTV News on May 27, 2012 about his newly released route map of the Trans Mountain pipeline through Burnaby-Douglas, and how Kinder Morgan's plans to add a new pipeline may adversely affect many local homeowners. Source: YouTube.

Texas-based Kinder Morgan plans to more than double the capacity of its Trans Mountain pipeline to 750,000 barrels of oil per day.

Kinder Morgan Canada will be seeking approval for a 150-metre-wide general corridor for the expansion, that if approved, could serve as a "potential expropriation zone," said Stewart to the Abbotsford News.

Kinder Morgan has stated that it will begin public consultation on their pipeline expansion in September and that they hope to negotiate to avoid expropriation. The expanded pipeline route could also deviate from the current one to accomodate urban areas.

“We’re lucky to have the oil sands in our backyard”

While stating that he’s no “rabid environmentalist,” Stewart said that we do need to manage the energy sector much better and invest the revenue from these resources to benefit Canadians instead of ripping them out of the ground as fast as possible and selling them off to export markets, a traditional Canadian approach to resources dating back to when Europeans landed on these shores. 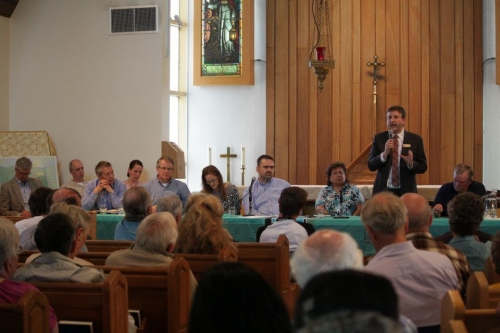 Kennedy Stewart at a community forum in June about the proposed expansion of the Trans Mountain pipeline. Photo credit: Kennedy Stewart's Facebook page.

While critical of the way the oil sands are being developed, Stewart said the solution is better management, not shutting them down.

“My brother is a forester,” Stewart said, “and we always talk about managing resources, not whether you use them or don’t use them. You are going to use them to a point, it’s just a matter of how you use them.

“I think a lot of people would probably say it’s very destructive and bad for the world but if managed properly it might not be bad at all.

“We’re lucky to have the oil sands in our backyard.”