Panelists Rafe Mair, Rex Weyler and Art Steritt all agree on one thing: pipelines and tankers make no business sense for British Columbia. 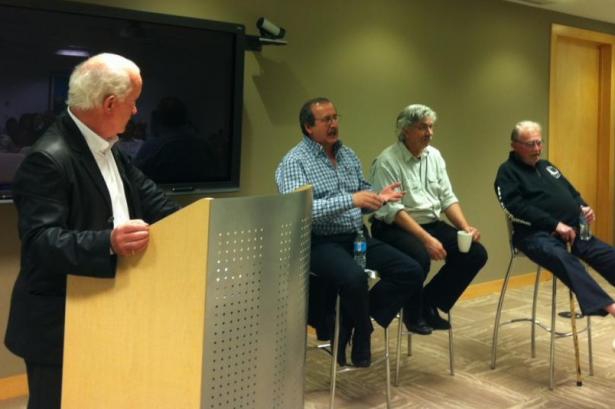 A collection of business-minded Vancouverites gathered at the SAP building in Yaletown Thursday evening, hoping for a lively—and perhaps heated—debate about the merits of pipeline and tankers on the BC coast.

There was just one small problem: almost everybody in the room was on the same side.

The evening's panel discussion was hosted by the Vancouver Board of Change, a network of local businesses, nonprofits, and students dedicated to the pursuit of both money and meaning. Panelists included outspoken political commentator Rafe Mair; ecologist and author Rex Weyler; and Art Steritt, Executive Director of the Coastal First Nations.

Organizers said they requested the participation of several different companies and individuals to speak to some of the “pro-pipeline” arguments, during a discussion focused on BC’s two major project proposals (the Enbridge Northern Gateway pipeline to Kitimat, and Kinder Morgan’s Trans Mountain pipeline expansion terminating in Vancouver).

Unfortunately, not one of the people or groups they asked actually agreed to take part.

“We asked 15 or 16 organizations and people on the pro side, and nobody said yes,” explained Board of Change director Monika Marcovici.

For a while, the Board was hopeful that North Vancouver blogger Vivian Krause would attend to share her views on the pipeline and politics. But in the end, Krause said she couldn’t make it.

“Everyone has an excuse,” Marcovici said.

In an effort to balance the scales, moderator Robb Lucy introduced the idea of having audience members don their oil industry hats to ask some tough questions, since all three panelists shared the same “no pipeline, no tankers” perspective. Many of the people in the audience were Board of Change members, and organizers hoped this event would help clarify the issues so that the group would feel comfortable taking an official position.

Do economic benefits outweigh the risks?

Seated in rows of cushy beige office chairs, the small audience of about 50 listened attentively as the panelists laid out their arguments against Northern Gateway and the Kinder Morgan expansion. The seemingly conflicting interests of business and the environment were at the top of everyone’s minds.

“There is no question at all that spills, ruptures and so on—whether it be pipelines or tankers—are a certainty. They’re not a risk at all, they’re an absolute certainty,” said Mair, dressed in a “Sea Shepherd” sweatshirt and Birkenstocks, and toting his wooden cane.

“When that certainty happens, the results are catastrophic,” he added, calling attention to a sizeable bitumen spill in the Kalamazoo River in 2010 that Enbridge has still not fully cleaned up.

Weyler, architect of the local coalition Tanker Free BC, went one step further, professing that catastrophic spills aren’t the only thing coastal residents have to fear.

Not enough benefit to justify risks of oil pipeline

A Board of Change panel "Oil Tankers and Pipelines: Good Business or Impending Disaster?"