Community leaders met Monday morning hoping to get Northern Gateway pipeline hearings back on track after they were cancelled over a protest. Heiltsuk Tribal Council says hearings should resume Tuesday afternoon. 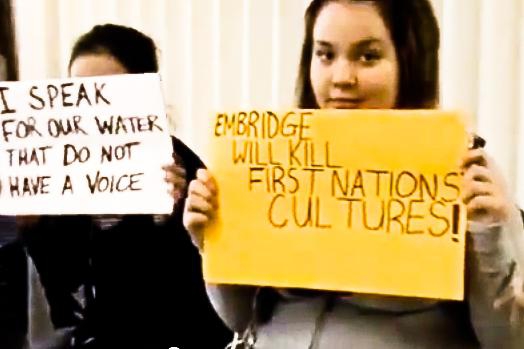 Activists and community members in Bella Bella, BC are disappointed and confused after Monday’s public hearing regarding the Enbridge Northern Gateway pipeline was abruptly cancelled due to security concerns.

“It’s almost unexplainable, at this point. It was absolutely a peaceful protest," said Ian McAllister, conservation director at Pacific Wild, who was in attendance. He said the panel's decision to cancel the hearings has everyone there "scratching their heads".

The cancellation came after about 200 people gathered Sunday afternoon for a rally to protest the disputed oil sands pipeline, meeting incoming officials from the Joint Review Panel at the local airport. Leaders from the Heiltsuk First Nation met with panelists this morning, and the tribal council now says hearings are to resume Tuesday afternoon.

RCMP in the area were present at Sunday's rally, and stated that "the protest was a peaceful demonstration and there were no incidents to report of.”

“I guess they didn’t feel safe, but I was there and I didn’t see anything that even remotely endangered them,” said Rachel Horst, a local teacher who helped coordinate an ongoing hunger strike with students at Bella Bella Community School.

“It was a strong presence. The whole community came out, there was drumming and some chanting, but it was all quite peaceful and respectful.”

Horst and her colleagues had been working with students for months to prepare oral presentations for the hearings, and had planned to invite panelists to join them in a feast at the end of the 48-hour hunger strike on Tuesday.

“At this point there’s a lot of disappointment, in the school anyway, because we really worked hard on what we were going to present to the panel today and tomorrow. So we’re really hoping that they change their mind,” Horst told the Observer.

McAllister added that many participants from out of town had invested a great deal of time and resources to come to Bella Bella for the hearings, and are now very disheartened at the recent turn of events.

"It’s extremely insulting. People came down by boat all the way from Hartley Bay, Bella Coola, people flew in from the north, from the south, a lot of dignitaries and chiefs. People have been preparing for this for months. So for this panel to come here in really what seems like a calculated move…if it wasn’t so serious it would be laughable," said McAllister.

On the Enbridge Northern Gateway Joint Review Panel website, no reason is given for the cancellation in Bella Bella. The Heiltsuk's chief negotiator Marilyn Slett said Sunday night that the panel had informed them of the cancellation, saying they did not feel like they were "in a safe environment". But in more recent reports, Energy Board spokespeople would not confirm that was the reason, instead citing "logistical issues" as being responsible for the delay.

Whatever the reason, some critics may see this latest debacle as an attempt to stifle debate, as government agencies have recently been stepping up efforts to limit public input on the controversial project.

"It is wrong that the panel is cutting the Bella Bella hearings by a full day and a half because of a complete and total misunderstanding of the Heiltsuk people and their respectful and peaceful protest," McAllister said, after plans to continue the hearings had been announced.

"Numerous people have been preparing for months for these hearings and now they are being told that there is not enough time. Perhaps this is part of Stephen Harper's plan to shorten environmental assessments in Canada."

New amendments to federal Environmental Assessment legislation announced with the budget last Thursday aim to impose time limits on reviews for new projects, and will be implemented retroactively to apply to Northern Gateway. And additional funds have been allocated for the government to crack down on environmental groups and charities engaging in overtly political activity.

As for the resistance in Bella Bella, community members say they are standing up for their beliefs and will continue to do so in a respectful, non-violent manner.

“I felt proud to be standing with this community. I was proud of what I saw, but I’m disappointed that it was so dramatically misinterpreted,” said Horst.

“From what I saw, it was just a group of people getting together and speaking their minds about their concerns, which I feel is an important thing to do as a democratic citizen.”

So far, the Joint Review Panel has yet to respond to the Vancouver Observer’s request for comment.