Poets gathered outside Enbridge’s offices Friday evening, for the launch of a book compiling poetic responses to the company’s controversial oil sands pipeline. 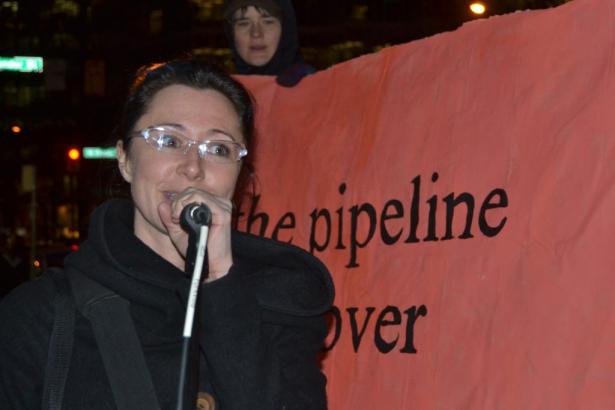 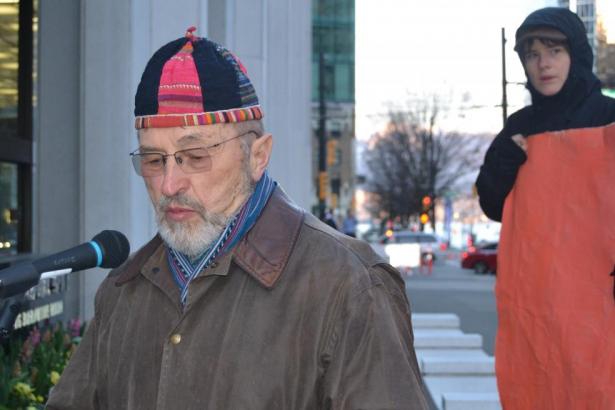 Poets huddled outside the Enbridge office in Vancouver to speak out against the controversial Northern Gateway pipeline project. Rather than holding banners and chanting slogans, however, these oil sands pipeline opponents protested through rhyme and spoken word.

They read works from The Enpipe Line, a collaborative book of anti-pipeline poetry that was launched at the event.

The project is the brainchild of a Vancouver-based editorial collective, consisting of some of the city’s most talented young poets. What they initially imagined as a 1,700-kilometre line of poetry—spanning the same distance as the Northern Gateway route from the oil sands to Kitimat, BC—has turned into over 70,000 kilometres of writing, by almost 100 different poets from around the world. (The length if each line were written in 1km-sized type.)

“We’re publicly stating that we, as a group, don’t want the pipeline to come to be. And I think it’s the work of community—bringing people together so that we can discuss the issues, and figure out what we want to see in our futures,” said poet and editorial collective member Christine Leclerc.

Leclerc said she came up with the idea for the anti-pipeline project in the midst of a 14-hour Greenpeace occupation of the Enbridge Northern Gateway office on Burrard Street.

“While I was there I was thinking about some different friends who had done projects to raise awareness about the pipelines and the harms of increasing tar sands development,” she said, mentioning friends she knew who kayaked along the coast to make a documentary film called Pipe Dreams.

“I’m a poet, among other things, and so I thought, ‘Well, what could poetry contribute to raising awareness and getting people involved in resisting the Enbridge pipeline in a broader sense?’” she said.

As soon as Leclerc sent out a call for submissions, she says, the creative work and support started pouring in. She and her colleagues coined the term “enpipe”, meaning to block up or fill a pipe to bursting, and began gathering poems from activists, artists, teachers and citizens far and wide. The project was maintained online for over a year before Creekstone Press publisher Sheila Peters approached Leclerc about publishing a hard copy.

Digital copies of the book have been sent to Northern Gateway proposal president John Carruthers, as well as Natural Resources Minister Joe Oliver, Enbridge CEO Patrick Daniel, and Enbridge contractor Patrick Moore—all of whom are quoted in the text.

Launched just in time for April’s Poetry Month, the unique project has even earned an endorsement from Parliamentary Poet Laureate Fred Wah, who came out to show his support at Friday's reading.

Another noted poet and activist, Stephen Collis, explained his views on the oil sands pipeline to a crowd of about 50 gathered outside the building.

A number of other poets took to the mic to share heartfelt renditions of verses related to the issue, including Kevin Spenst, Elaine Woo and Mercedes Eng.

Ray Hsu, a member of the editorial collective (and a VO contributor), explained that he was drawn to the initiative because there was no other outlet for emotional or personal concerns about the proposed pipeline. When he was learning about the process for intervention in the Joint Review Panel hearings, he was frustrated that its technical nature and strict guidelines left little room for expressing their feelings.

“If the avenues for democratic participation are so narrow that you basically have to do scientific research in order to even say something, I think there’s a problem,” said Hsu.

“People from all over sent in poems for this. I think that says something.”

Leclerc said proceeds from Enpipe Line book sales will go into a Northern Gateway Pipelines resistance legal defense fund, to be used in the event of arrests or other consequences of future resistance actions.