Minister Kent was joined on stage by a panel of oil sands producers and other energy executives, addressing innovation in the industry as well as innovative ways to streamline environmental reviews for new energy projects. 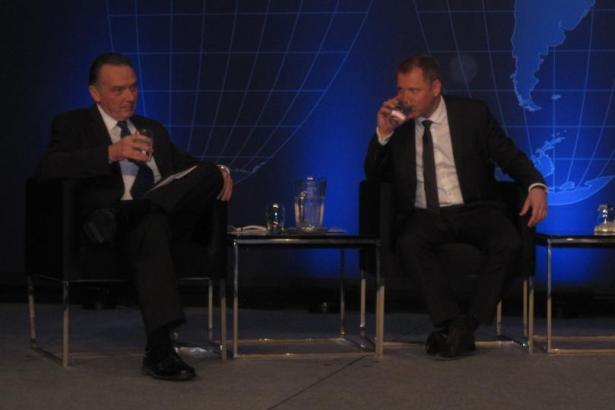 Recently, the government has come under fire for reported plans to “gut” the federal Environmental Assessment agency, with major cuts to the department’s budget and a push for shorter review timeframes.

With that in mind,  Environment Minister Peter Kent’s speech at GLOBE 2012 Conference yesterday would  not have pleased critics given the repeated references to “streamlining” assessments and encouraging economic growth. Though he did not specifically mention the Enbridge Northern Gateway project, many of the minister’s points could be related to the ongoing pipeline review, which Conservative officials say is being bogged down by excessive public participation and “foreign interests”.

“[The review] process can get slow and bulky very quickly,” said Kent.

“So it’s important to remember when you’re talking about environmental rule, less can be more. Quantity should never be confused with quality.”

Appearing as keynote speaker during an energy dialogue at the conference, Environment Minister Peter Kent repeatedly emphasized the importance of “efficiency” in the government’s attempt to modernize Canadian environmental assessment processes.

Minister Kent was joined on stage by a panel of oil sands producers and other energy executives, addressing innovation in the industry as well as innovative ways to streamline environmental reviews for new energy projects.

“The role of government is not to pick winners and losers, of course, but rather to work to remove the barriers and impediments to growth, and ensure the health and the safety of our citizens and our shared environment,” said Kent.

“The government of Canada is determined to do what it can to create a greater degree of certainty for business, and to establish realistic timelines to help make conditions that encourage competitiveness and investment, and all the jobs that in turn are created by that investment. But all that can only come to pass if we create a modern, predictable and rigorous regulatory system. A system that’s streamlined and transparent, and a system that is effective and efficient.”

During his talk, Kent acknowledged the “divergent perspectives” held by different groups regarding the environment. With a small group of protesters gathered outside the Convention Centre to greet the minister, it was difficult to ignore the increasing tension and public engagement around these issues.

“The public debate over environmental issues has become, I think it’s fair to say, rather heated and polarized. People on either side are passionate about their positions and are rooted, I believe, in a deep desire to protect and preserve the pristine wilderness, their traditional ways of life, or the creation of quality jobs for their community. All of these positions have merit, none are paramount,” Kent stated during Thursday’s panel session.

“But importantly, if there’s one word that characterizes Canada, I believe it is diversity—diversity indeed in our cultures, diversity in beliefs and ideology, diversity of geography, and opportunity. The federal government’s role is to find common place among the divergent perspectives and in all sectors of public policy.”