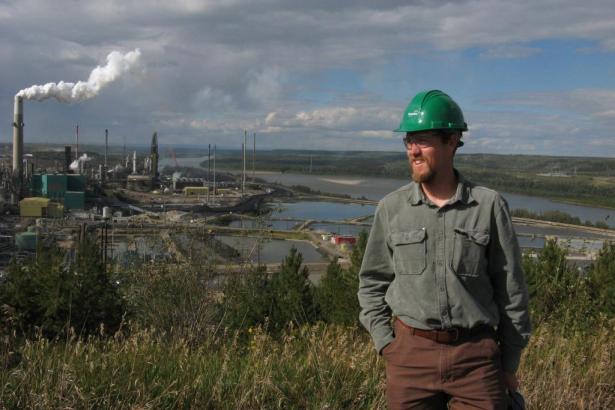 Filmmaker and Rocky Mountain hiking guide David Lavallee joined a panel of activists and experts Wednesday evening for a lively discussion about the oil sands, sandwiched between a double screening of his documentary film White Water, Black Gold.

Lavallee’s film takes viewers on a journey from the pristine ice fields and glaciers feeding the Athabasca River to the Alberta oil sands, offering a glimpse into the booming industry and its intimate—and dangerous—connection to Canada’s precious water resources.

Held at the Vancity Theatre, Wednesday’s event was one of a handful of local screenings, and served as another opportunity to engage the public on issues related to controversial pipeline proposals like Enbridge’s Northern Gateway project.

“We have a really exciting opportunity to put some real limits on the behaviour of this industry,” said Lavallee, after reading an extensive list of the oil sands’ environmental and social impacts.

“They really, really need this pipeline to grow…and all we have to do is say, ‘No’. As British Columbians we need to stand up with one voice, and say, ‘No’.”

Also participating in the panel were UBC environmental policy professor George Hoberg, Wilderness Committee campaigner Ben West, and Forest Ethics’ Jolan Bailey. Fielding an hour’s worth of questions from the audience, the panelists addressed the unprecedented public concern over Northern Gateway, economic impacts of the tar sands, as well as the potential increase of tanker traffic in the Burrard Inlet.

Organizers had no qualms about admitting that the panel was “one-sided”, instead encouraging participants to share their perspectives on how to move towards a national energy strategy that doesn’t include unhindered development in the tar sands.

“We need a future for Canada that is prosperous, but it’s green. I think that Canada is possible,” said Hoberg.

“There is an alternative, it’s viable, it’s prosperous, but we’re not going to get there unless we take dramatic political action, to get in our politicians’ faces and force them to understand that we want change.”