Forest advocates from all over the coast press the B.C. government for a conservation fund, urging private owner Island Timberlands to delay logging until they can purchase priority lands. 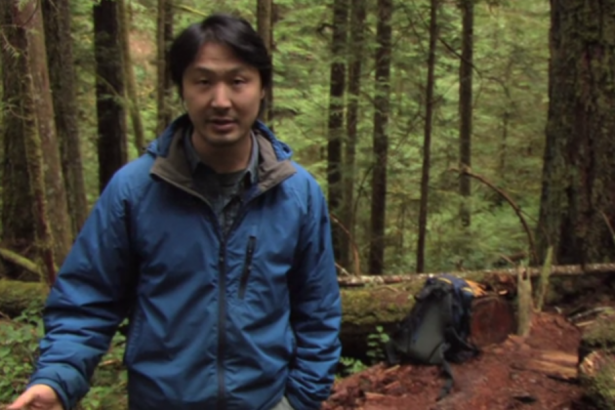 Ken Wu of the Ancient Forest Alliance, in the woods of Cortes Island

At a press conference in Sooke, B.C. this afternoon, environmental advocates called on the provincial government to create a new park acquisition fund that could help save threatened coastal forests from logging.

The fund, which conservationists say should raise at least $40 million per year, could be combined with the fundraising efforts of organizations and individuals to purchase lands from private owners and ensure the survival of key forest areas. Groups campaigning for forests in various parts of the province joined today to make the request, as part of an attempt to protect a number of lands slated for logging by B.C. forestry firm Island Timberlands.

“Christy Clark’s BC Liberal government must step forward with a funding solution, a BC Park Acquisition Fund similar to those of many regional districts, to purchase old-growth forests, sensitive ecosystems, and other important areas on private lands for protection - particularly Island Timberlands’ contentious lands,” said Ken Wu, co-founder of the Victoria-based Ancient Forest Alliance.

“At the same time, Island Timberlands needs put the brakes on their plans to log the last old-growth stands and contentious areas until those lands can be purchased for protection.”

Areas set to be logged by private owner Island Timberlands include large swaths of land on Cortes Island, in addition to the Stillwater Bluffs near Powell River, McLaughlin Ridge and the Cathedral Grove Canyon by Port Alberni. In each of these locations, citizens have initiated aggressive campaigns to try to negotiate with the company and prevent harmful clear-cutting practices.

Zoe Miles, a forest activist who grew up on Cortes Island, says so far public support for local conservation efforts have had a significant impact. Miles was one of the advocates behind a 6,000-signature petition that Cortes community members delivered to IT just weeks ago.

“There has been an incredible amount of public pressure about the situation on Cortes, which I think is a major factor in Island Timberlands' recent decision to postpone their logging plans for 6 months," she said.

"It's a temporary victory, but it does give us more time to raise funds for land purchase. If Island Timberlands is genuinely willing to consider land sale at fair market value, then it's the responsibility of our provincial government to listen to its electorate and help make that happen."

Regions like the Capital Regional District around the south end of Vancouver Island have already put acquisition funds in place to create new parks from endangered areas. Partnering with citizens and organizations like the Land Conservancy of B.C., the Capital Region has managed to purchase almost 4,500 hectares of land since 2000.

With the support of the province, advocates at today’s event hope to see similar successes in places like Cortes Island. In addition to the acquisition fund, the Ancient Forest Alliance is also urging the B.C. government to implement a Provincial Old-Growth Strategy to protect endangered old-growth forests, to ensure sustainable second-growth forestry, and to ban raw log exports to foreign mills.