Driving electric in Vancouver is about to get a lot easier, with a city plan unveiled yesterday to install 67 new public charging stations by the end of next year. But why make the switch? We've got a list of facts about zero-emission vehicles and how they stack up. 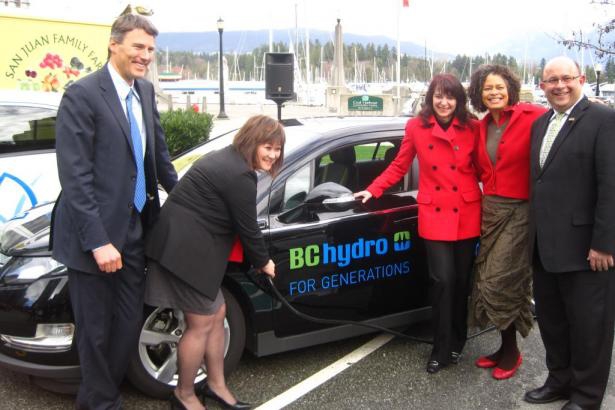 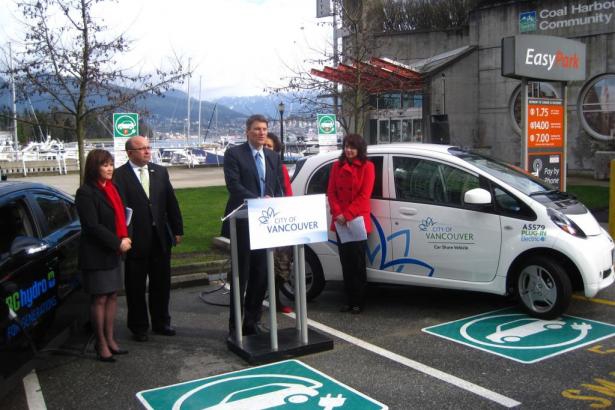 Vancouverites will have access to 67 new electric vehicle (EV) charging stations by the end of 2013, as part of an aggressive pilot project unveiled Wednesday by City Hall. The “Charge and Go Vancouver” trial will significantly enhance the current EV charging network, thanks to $800,000 in combined funding from the City of Vancouver, the Federation of Canadian Municipalities, BC Hydro, and both federal and provincial governments.

Mayor Robertson made the announcement at the site of a newly installed charging station in Coal Harbour, alongside Park Board Chair Constance Barnes and representatives from the project’s various partners.

“It’s very exciting to be here today and mark another milestone for our city in becoming Canada’s most electric vehicle-ready city,” said Robertson.

“Vancouver can show other cities across the country and around the world how zero-emission vehicles can be supported as they roll off the line and people decide they need to make that shift to clean transportation in a car.”

This pilot project is the next big step in the city’s long-term strategy to fight climate change and reducing emissions, and it complements other electric transport initiatives already in place.

For instance, under the “green” building code passed in 2010, new single-family homes and multi-unit residential buildings must include electric vehicle charging infrastructure. The city’s fleet of electric vehicles—which currently includes a zero-emission Mitsubishi i-MiEV—will also be growing in coming months with the arrival of a second all-electric car.

The Vancouver Park Board has been leading an effort to increase public charging alternatives, having already installed eight EV charging stations at local parking lots including Sunset and Creekside Community Centres. It’s hard to pin down the exact number of existing charging stations in Vancouver, since many of them are installed by private building owners and aren’t for public use. But city officials estimate that right now there are only about 20, including both private and public stations.

“The goal is to have 67 electric vehicle charging stations that are publicly accessible around the city by the end of next year, and that’s an ambitious target,” Robertson told press on Wednesday.

“It’s more than any other city has across Canada. It may be the most aggressive approach in North America right now, but I think it’s important for Vancouver and for Canada to take leadership on this front.”

Though the percentage of electric cars on the road is still relatively low, B.C. has the highest hybrid adoption rate in Canada. One of the first all-electric, zero-emission vehicles (ZEVs) to hit the market, the Nissan Leaf, was just introduced here in October 2011. And now with better charging infrastructure and a $5,000 rebate available for car-buyers through the province’s CEV for BC program, ZEV sales are expected to see significant increases over the next few years.

“In preparing for the electric vehicles to enter the marketplace in B.C., we actually need to understand the customer’s needs and also the impact on our system—both the generation and the distribution—to make sure that the grid is properly ready to support these vehicles,” said Lisa Coltart, Executive Director of Power Smart and Customer Care at BC Hydro.

“With more than 90 per cent of our electricity generated here in British Columbia from clean and renewable resources, the use of electric vehicles can significantly reduce greenhouse gases here in the province. And as the primary fuel supplier of electricity, BC Hydro definitely has a significant role to play in this.”

The pilot project is a way for the city to get the ball rolling on electric vehicle adoption, and will also help collect data to evaluate how and where new stations should be integrated into the grid. The data can then be applied to other cities across the province, and the country.

Many drivers are wary about making the shift due to the high initial cost of buying an electric vehicle and installing home charging stations. But despite the barriers, there are some definite longer-term benefits. Here are a few interesting facts: 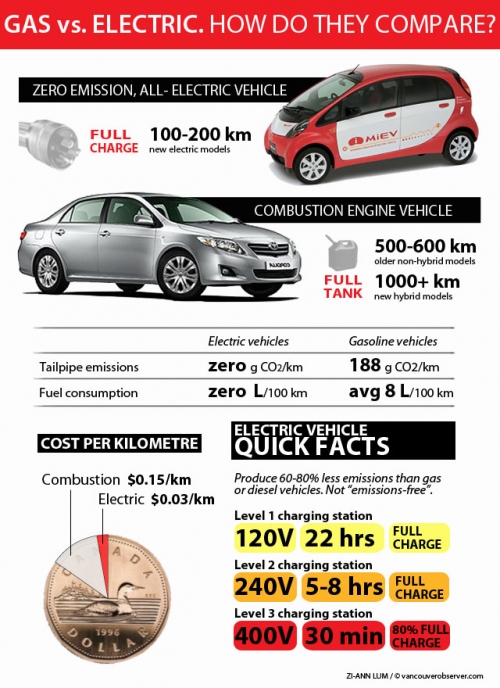 This information is based on facts for zero-emission vehicles (ZEVs) like the all-electric Nissan Leaf, so it doesn’t apply to hybrids and other low-emission vehicles. Estimates may also vary depending on the model, etc.