Engaged Vancouverites come together at SFU Woodward's for a night of inclusive, intergenerational dialogue -- this month tackling the issue of waste reduction in the city. 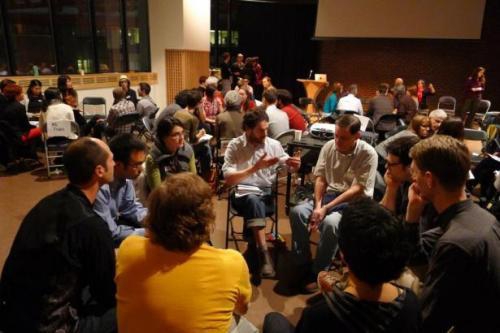 Waste management has never been a particularly glamorous subject, but it’s an essential piece of the urban puzzle.

Reducing waste in Vancouver is one of the major priorities in Mayor Gregor Robertson’s Greenest City Action Plan, and it’s up for discussion Wednesday night at “Wasteless in Vancouver”, an intergenerational dialogue being held at SFU Woodward’s.

The event is part of the ongoing Re:Generation series, organized by a group of local change-makers as a way to engage citizens of all different ages on topics affecting their city. Organizer Kevin Millsip says one of the goals of the series is to bridge the communication gap between citizens and policymakers.

“It’s about trying to build other people’s capacity to make change happen. Because no one or no one group of people can do it all on their own,” he said.

Millsip, who is volunteering on this project, is also the Sustainability Officer for the Vancouver School Board. He and the other Re:Generation volunteers received a Greenest City grant from the City of Vancouver to get the project off the ground, using four different Greenest City goals as a thematic guide for the sessions. Each dialogue features speakers of varying ages, each telling his or her own story in relation to the overarching topic. Last month, the group’s debut session tackled sustainable transportation. This month—waste.

Waste reduction is a major focus in the City’s Greenest City plan, which lays out the ambitious goal of “creating zero waste” by the year 2020. Any attempt to achieve this goal will mean significant lifestyle changes for residents, as well as big adjustments in the way the municipality manages garbage and recycling.

“In my mind, there are two approaches. There’s what we do with stuff when we’re done with it—the common term is ‘diversion’ when we’re diverting it from the landfill,” explained Millsip.

Changing people’s consumption habits is a difficult task, and it has to involve shifts at the production level in order to place less of the burden on consumers. Diversion, on the other hand, seems to be more easily attainable for residents in the short term. Separating household organic waste is one initiative that has been successful in other cities across Canada, and Millsip says it’s shocking that Vancouver is still playing catch-up.

“All of our organics should not be going to a landfill. It’s anywhere from 40 to 50 per cent of our waste stream, depending on where we’re at. That’s huge,” he said.

“But we have to have the systems in place so that people can do the right thing.”

Over the past year, the City has been starting to jump on the wagon by implementing curbside compost pickup, but the service is not yet available city-wide (or for people in apartments or condos). But that doesn’t mean people aren’t already doing it.

Deanna Rogers, one of Re:Generation’s other dedicated organizers, has a wealth of experience in the compost department. As a student at Simon Fraser University, she was involved in a groundbreaking community project called the Zero Waste Challenge, which became part of Metro Vancouver's regional waste reduction strategy.

The challenge started out as a personal goal for Rogers and her roommates to cut their waste down to nothing. But when she took her idea to Metro Vancouver, they ended up funding the program as a way to mobilize residents in the neighbourhood of Strathcona. Since then, the challenge has been implemented in other areas around the Metro region.

“I did the Strathcona Zero Waste Challenge before we had municipal composting at all,” said Rogers.