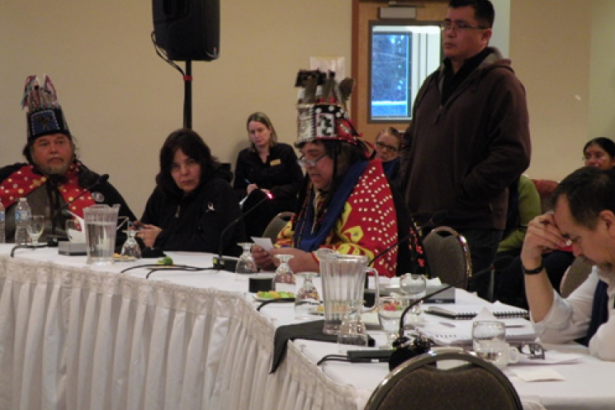 Just a few days ahead of regulatory hearings in Prince Rupert regarding the Northern Gateway pipeline, Enbridge has submitted a request to the Joint Review Panel to impose time limits for presentations by non-Aboriginal intervenors.

North Coast MLA Gary Coons, who is scheduled to present at the hearings, says the company’s tactics do a “great disservice” to pipeline critics and citizens in the key coastal riding.

In the initial request, Enbridge Northern Gateway VP Ken MacDonald claimed that oral evidence from non-Aboriginal participants so far has not been meeting the Panel’s criteria, mainly because it is considered “in the nature of argument”.

“To further assist the parties and the efficiency of the process, Northern Gateway requests that the Panel consider limiting the time for oral evidence that is allocated to non-Aboriginal participants to 10 minutes each,” MacDonald wrote in the letter.

He listed a number of individuals and groups scheduled to present at the Prince Rupert hearings on February 17 and 18, including Coons and Nathan Cullen, the NDP MP for Skeena-Bulkley Valley. Both politicians were originally given 60 minutes for their presentations.

After discovering Enbridge’s request, Coons responded with another letter to the Joint Review Panel, asking them to reject the company’s proposal.

“I’m disappointed and concerned that Enbridge is attempting to silence voices, especially from the riding that’s going to be most impacted—the North Coast,” said Coons.

“It appears that they don’t want to hear what’s actually happening in our riding, where it’s going to be all the risk and no benefits.”

The hearing guidelines say the Panel will accept oral evidence of two kinds: traditional knowledge from Aboriginal peoples, and personal knowledge about how the project could potentially affect an individual or community.

Intervenors are not supposed to present oral evidence based on science or the views of others, and they are not to include detailed information that could be considered “argument”.

Coons says he has been preparing for his presentation for months, and is familiar with the process, having attended previous hearings in other Northern communities.

“I went to Terrace, I went to Kitimat, I’ve been following online and I’ve been thinking about it for probably four or five months, how I was going to present [my evidence]. I believe what I’m going to say and share will follow the parameters of the procedural direction that was given to all of us,” he told the Observer.

Nathan Cullen has also lashed out against Enbridge for trying to take control of the hearings, noting the “suspicious and shameful” timing of the company’s request.

"This letter came out the same week that the only Member of Parliament will be presenting to the panel. It also happens to be the Member whose riding is most affected...This letter is obviously an effort to silence elected officials," said Cullen in an article on the Northern View website.

Like Cullen, Coons believes he has a responsibility as an MLA to voice the concerns of his constituents at the upcoming hearings. He says decisions about running the public hearings should be left to the independent Panel members and not to those who stand to benefit from “silencing voices”.

“The Panel is in a very difficult position. They’re hearing loud and clear, and I believe getting all the evidence that this is not in the public interest,” said Coons.

“I think it’s pretty significantly stacked up against the board, and I hope that they take a close look and acknowledge that this is not the project to go through Northern British Columbia.”

So far, the NDP MLA says he has not received any response from the Panel or its secretary. As far as he’s concerned, he and Cullen are still scheduled to give their evidence based on the previously allotted time.

Enbridge has not yet responded to the Vancouver Observer’s requests for comment.