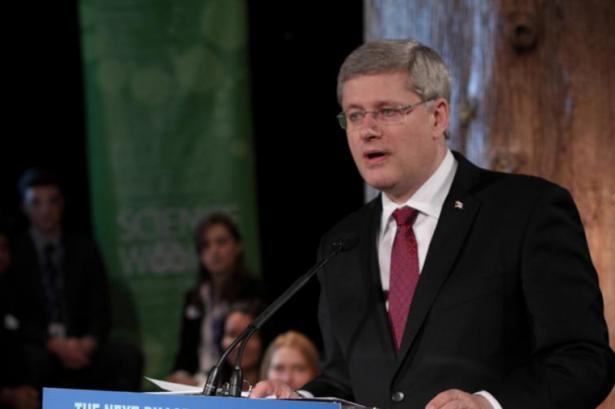 ForestEthics whistleblower Andrew Frank claims that Prime Minister Stephen Harper's office is resorting to threats to quell environmental opposition against the Northern Gateway pipeline. There have been conflicting reports on what actually happened at Frank’s organization, but for others in the environmental community his serious allegations come as no surprise.

In an open letter and signed affidavit, the former ForestEthics communications manager recounted how representatives from the Prime Minister’s Office attempted to silence pipeline critics, alleging that they blacklisted the environmental group as an “enemy of the Government of Canada”. Frank claimed that the PMO threatened the charitable status of the prominent Tides Canada Foundation, unless they agreed to pull funding from ForestEthics.

Tides CEO Ross McMillan would not comment on Frank’s allegations, saying his depiction of interactions with the Prime Minister’s Office was “inaccurate”. PMO press secretary Andrew MacDougall has denied that the office made any of the statements reported in the affidavit, and Frank has since been fired from his position.

Regardless of whether or not the Prime Minister’s Office named the organization an “enemy” of the state, the feeling of tension amongst environmental groups on the pipeline issue is hard to ignore. For John Bennett, Executive Director of Sierra Club Canada, Frank’s claims are simply another sign of the Harper government’s aggressive tactics.

“I can’t really comment on what was said there, but I can tell you that I have personally been yelled at by John Baird when he was the environment minister,” said Bennett.

“So I’m not surprised that someone in the Prime Minister’s Office might say something like that. It certainly rings true with how they talk to us whenever we do get a chance to talk to anyone.”

Bennett compares the Northern Gateway debate to other environmental battles in the past, noting some key differences in political strategy. After Resource Minister Joe Oliver called environmentalists foreign-funded “radicals” bent on “hijacking” regulatory hearings, Sierra Club Canada was one of many groups under the spotlight for accepting international support. Bennett says that in his 35 years as an advocate, he has never before had to work so hard to defend his organization and their funding.

“But they wouldn’t be doing things like calling you enemies of the country. They wouldn’t be talking about where your financing comes from. These are all tactics that have been developed in the United States by the Republican Party as a way of creating politics of division. Because they’ve discovered that if you divide people then you can win office.”

“A scary time for Canadian democracy”

Bennett describes the current situation as very “McCarthy-esque”, with the addition of what he calls a “new wrinkle” that involves creating surrogate or “pretend” grassroots organizations that support federal policies.

“They test the lines with these surrogate organizations and then the politicians start to repeat them. So we have Ethical Oil talking about ethical oil, but then the Prime Minister’s saying exactly the same thing,” Bennett said.

Ethical Oil’s “foreign funding” smear campaign against environmental groups was one thing, but for many the idea that oil sands critics could be targeted and directly threatened by the government takes the issue to a whole new level.

Bennett says it calls Canada’s whole history of public debate into question—before now, he says citizens could expect the government to listen to the opposing views on a subject before making a decision.