As public hearings continue on the controversial oil sands pipeline, resort owners say tankers and potential oil spills could have a severe impact on the B.C. tourism industry. 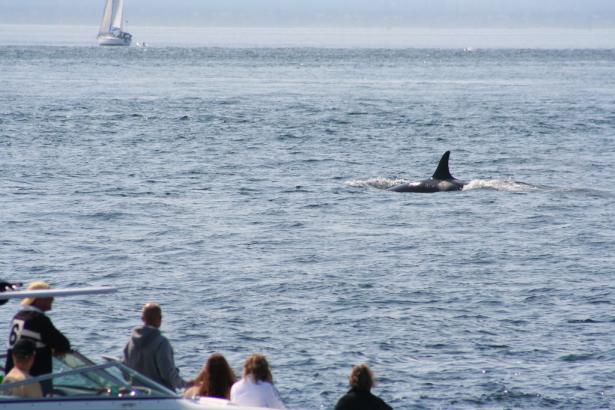 Popular B.C. tourism activities like whale watching would suffer greatly in the event of an oil spill. Photo by Odenosuke

With regulatory hearings regarding Enbridge’s Northern Gateway pipeline hitting towns and cities across the province, resort owners, ecotourism businesses and others in the B.C. tourism industry are raising serious concerns over the potential impact of the project.

As people around the world struggle to find solutions to global warming, discussion around the controversial oil sands pipeline has now become an international issue. Here in British Columbia, organizations and individuals on the front lines are fighting to have their voices heard.

Tourism is just one of many sectors that could be affected by potential spills or other pipeline-related hazards, and given the industry’s emphasis on our “super, natural” landscape, they’ve got a particular interest in protecting the province’s pristine wilderness.

Evan Loveless is the Executive Director of the B.C. Wilderness Tourism Association (WTA). His organization is dedicated to protecting the environment to ensure access to wilderness tourism and activities, and like many others in the industry he’s worried about the Northern Gateway project.

“The industry and our individual members and operators are certainly concerned,” said Loveless.

“The biggest concern is the threat of a spill on the coast…we think that a spill is inevitable if there’s that much tanker traffic going down Douglas Channel, and a spill would have irreparable damage in our industry,” he said.

According to the WTA, clients spend an average of $1.5 billion a year on nature-based tourism in British Columbia. There are over 2,200 businesses operating in both rural and urban settings, and all of these businesses rely on maintaining the health of the province’s wild spaces.

“One of the biggest attractions certainly on the coast for our operators is wildlife viewing,” said Loveless, noting the huge market for marine tours and things like bear and whale watching.

If a spill were to occur, he explained, it would have drastic effects all the way up the food chain. If there’s no fish for the bigger animals to eat, there won’t be much for visitors to see.

“If those experiences are damaged, then the whole industry is impacted—whether it’s sport fishing or wildlife viewing, or scuba diving or just the aspect of the cruising charters transecting the coast,” said Loveless.

Loveless also pointed out an important fact: tourists who come for a wilderness adventure on the coast are also usually spending time in urban centres like Vancouver or Victoria.

“I think it’s going to have quite a negative impact on tourism, particularly in our area,” said Uehara.

King Pacific Lodge is located on Princess Royal Island, a small and isolated island off the north B.C. coast near Prince Rupert. It is only accessible by air and by boat, and has essentially no human population apart from the resort.

Uehara says the island is also within about 20 miles of Hartley Bay, a community on the pipeline route at the mouth of the Douglas Channel where residents have been very vocal in their opposition to the project.

“Given our ties to Hartley Bay, and given that we are in the Great Bear Rainforest, one of the ecological jewels of Canada, we’re opposed to the pipeline and the resulting tankers,” Uehara said.

“If you look at King Pacific Lodge, it is about eco-tourism, it is about nature in a state that we have a unique opportunity to offer. And that unique opportunity would be gone with the advent of the pipeline and resulting tankers, because it’s incompatible to talk about nature in the way we do and have oil tankers plying the waters, the very same waters we’re in. It just doesn’t make sense,” he said.

Uehara and his organization have been deeply involved in promoting sustainable tourism in B.C. in the past, and played a significant role in protecting sensitive areas of the Great Bear Rainforest. This commitment to the environment is key to the success of King Pacific’s business, since people seeking a “wild” experience make up the bulk of their clientele.

“[So] promoting the environment, conservation and First Nations culture is not an option for us. Those are core values to what we present.”

Uehara referred to the notorious Exxon Valdez oil spill in Prince William Sound as an example of the lasting impacts on the environment and on tourism, making note of the fact that oil has been found in the ground there over 20 years after the incident. If that type of spill happened on the B.C. coast, he says there’s little chance his resort would recover.

“We would anticipate you’d have to close down. And I don’t see how you’d compensate for that in any way,” said Uehara

King Pacific Lodge has put a request in to present their concerns at one of the hearings with the Joint Review Panel, but so far Uehara says they have not heard back. Loveless says the Wilderness Tourism Association has also applied to participate in the review process, and will be presenting their position at upcoming hearings.

Enbridge has made extensive assurances regarding the safety and integrity of the proposed pipeline, and claims to be committed to their environmental policies. There is no reference to tourism-related impacts in the company’s online Northern Gateway materials, and at the time of publishing Enbridge had yet to respond to requests for comment.