Protesters portray Natural Resources Minister Oliver as a puppet for foreign corporations, while voicing their concerns over the controversial Northern Gateway pipeline. 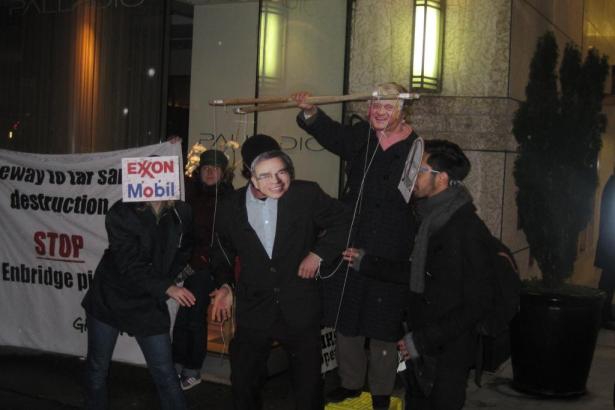 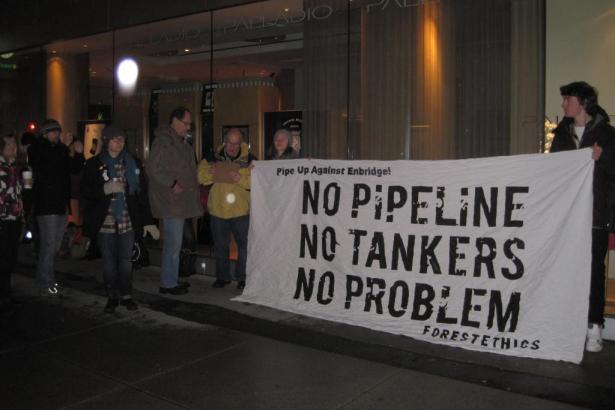 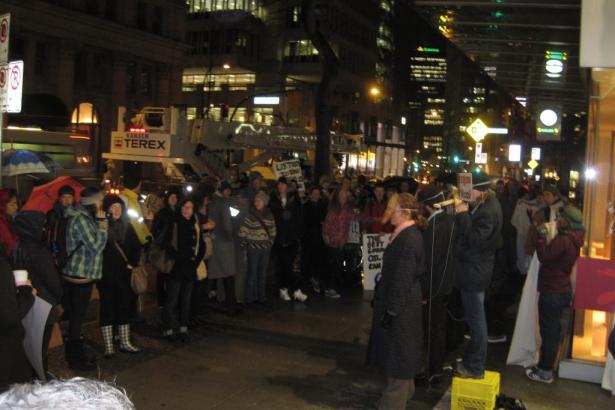 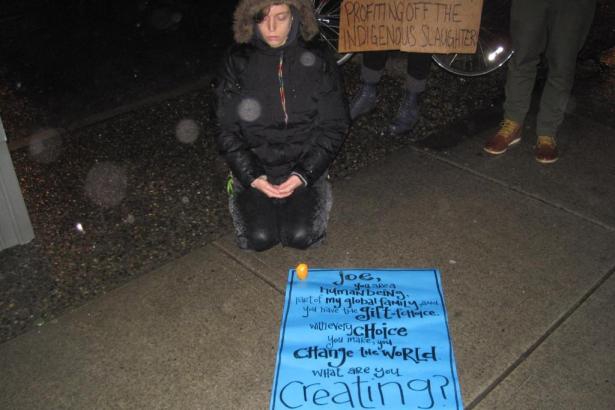 No oil pipeline, no tankers, was the resounding message of activists to Resources Minister Joe Oliver in Vancouver on Monday.

Despite the wet weather and early hour, protesters huddled outside the downtown Terminal City Club today with representatives from Greenpeace and ForestEthics, to greet Oliver at a speaking event arranged for the BC Chamber of Commerce.

Over 75 people attended the protest against Enbridge’s disputed Northern Gateway project, arriving as early as 6:45 a.m. to set up posters and props. It was a vocal response to comments in Oliver’s recent open letter, which referred to environmentalists as “radicals” using foreign money to hold up Joint Review Panel hearings during the pipeline’s review process.

“We thought we’d take the opportunity to come by and let [Oliver] know that we oppose the Enbridge tar sands pipeline, and that it’s fairly appalling that he would attempt to cast the unprecedented number of people signed up to participate in the hearings as ‘bogeymen’,” said Greenpeace spokesperson Christine Leclerc.

Oliver was scheduled to speak this morning at the latest edition of the Chamber of Commerce’s “Cabinet Minister Breakfast Series”, and later as part of the Mineral Exploration Roundup 2012 conference. However, to the protesters’ dismay, the Minister did not make an appearance outside the building.

Campaigners at the event raised a variety of concerns about the proposed pipeline, including the impacts of tar sands production on climate change and the threat of tanker spills on the coast. They passed around handouts and postcards to send to Enbridge. They carried signs reading “No pipeline, no tankers, no problem” and “Gateway to tar sands destruction”.

One protester, dressed in a suit and Joe Oliver mask, was on display as a marionette being controlled by foreign oil companies and Enbridge CEO Pat Daniel.

“And one of the things he’s going to be talking about is how much he thinks Canada needs a pipeline punching through all the opposition in British Columbia to carry tar sands oil to Asia.”

Several people pointed out that while Oliver has attacked “foreign-funded” environmentalists for holding up regulatory hearings, there has been no argument against foreign industry representatives participating in the review process.

“It raises some serious questions about who our Minister for Natural Resources, whose interests he’s serving,” said Bailey.

Speaking to the crowd with a megaphone, Bailey explained his view that the government’s aggressive attempts to marginalize the opposition could be, in some ways, seen as a compliment.

Bailey’s opinions were echoed by Tzeporah Berman, Co-director of the Climate and Energy program with Greenpeace International. Making an appearance at the protest, Berman expressed her confidence in the strength of opposition across the province and the country. Like others, she made note of environmentalists’ recent success in derailing the US-bound Keystone XL tar sands pipeline—a success many hope will be replicated here.

“We know that there are solutions to what’s happening in Canada right now,” said Berman.

Environmental advocates from across Canada have been weighing in on the impacts of the Northern Gateway pipeline for months. But for groups like Greenpeace and ForestEthics, today’s protest was just the beginning.

“There are all sorts of actions people can take, from action online, sending letters to the Minister of Natural Resources Joe Oliver, writing letters to Stephen Harper, coming out to rallies,” said Leclerc.

“This is just going to be continued action until we stop this pipeline.”