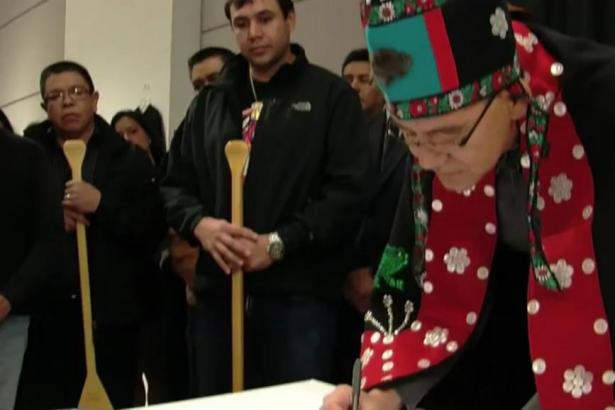 B.C. First Nations leaders line up to sign the Save the Fraser Declaration, vowing to protect their unceded territory from pipelines. Screen capture from YouTube

The president of the Haida Nation Council, Guujaaw, was shocked when he saw his organization’s name on Enbridge documents submitted to the Joint Review Panel for hearings on the controversial Northern Gateway pipeline.

In December, he sent a letter via email to the company – and to the panel – requesting that the Haida groups listed be removed from the documents. Since then, Guujaaw says he hasn’t received any response from Enbridge, and he and others from Haida Gwaii are very unhappy with the company’s claims.

“There’s a fairly extensive list,” Guujaaw explained, “that would give the impression that there’s a lot of support out there amongst the First Nations.”

However, he said that recent events and a growing group of outspoken leaders are proof that First Nations support for the pipeline is minimal, if there’s any support at all.

“There’s nobody," he said. "Including the Gitxsan, who seem to have been shut down for attempting to [negotiate] – shut down by their own people."

Members of the Gitxsan Nation formed blockade last month, after negotiators from the Gitxsan Treaty Society made a much-disputed deal with Enbridge. Their experience with the controversial agreement has been seen as a signal of the strong opposition among Aboriginal communities, particularly since 130 nations across B.C. signed the Save the Fraser Declaration vowing to protect unceded territories from the pipeline.

Guujaaw pointed out that the Haida Nation is also a signatory on the declaration.

In his letter of complaint, reported in a Vancouver Sun blog and local Haida Gwaii publication the QCI Observer, Guujaaw said Enbridge submitted false claims about engaging in “relationship building” with the coastal First Nation.

"Enbridge has provided deliberately misleading and false information claiming that [it] has built relationships with the Haida Fisheries Program, Haida Development Corporation and Haida Child and Family Services,” Guujaaw said in an email to the Joint Review Panel dated Dec. 20.

"We would like to have all these names stricken from Enbridge's files [and] documents as it is libelous bringing these organizations into disrepute, not only with their own constituents, but also the many First Nations, organizations and people committed to the health of this planet."