Canada gets two thumbs down for its inaction -- and bad action. 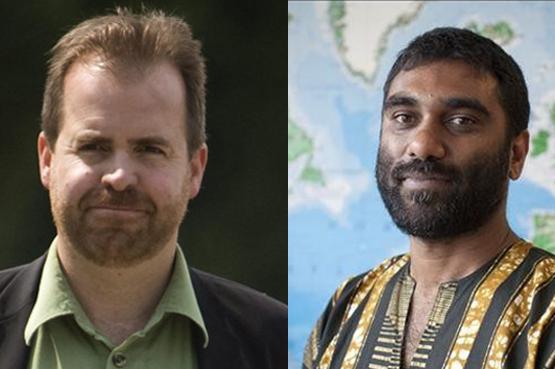 Environmentalists and climate experts expressed anger and deep disappointment yesterday with the results of the Durban talks -- and Canada's role in them.

“Having seen the truly terrifying scope and speed of climate change in the Arctic, I regard any delay in reducing greenhouse gas emissions as irresponsible and inexcusable,”  Michael Byers, Canada Research Chair in Global Politics at the University of B.C., told the Vancouver Observer.

“There is no reason to celebrate. It was a lowest-common denominator consensus, with Canada being at the very bottom of the ‘lowest’ camp. In a decade or two, our children and grandchildren will condemn us for this."

Throughout the climate talks, Canada was called out by the international community for its inaction.

Environment Minister Peter Kent said in his final statement that the government was “cautiously optimistic” about reaching a new agreement by 2015, reiterating his dismissal of the Kyoto Protocol and claiming it was neither effective nor in Canada’s best interests.

And Monday, in a move predicted for weeks, Kent announced Canada’s formal withdrawal from the Kyoto accord. For many Canadian delegates who attended the conference, the government’s position – reinforced by this afternoon’s announcement – has been seen as both a source of embarrassment and a call to action.

“This truly is a slap in the face to the international community. Canada is the first country to formally withdraw from the Kyoto Protocol. It’s a huge abdication of our international responsibility.”

Speaking to the Vancouver Observer from South Africa, McKinnon expressed her sadness at the news of Canada’s withdrawal. She explained that the conference in Durban had identified a coalition of countries who did recognize the urgency of the problem, but said that given the circumstances, it’s impossible for them to wait for countries like Canada to catch up.

“I think the world realized in Durban that they were going to have to leave Canada behind when it came to taking action on climate change, in the face of one of the most urgent crises that humanity has ever faced,” she said.

Members of the Canadian Youth Delegation, who were kicked out of proceedings last week when they stood and turned their backs on Kent, said that global leaders at the conference – not just from Canada – did little more than “lay a road map to devastation”.

"We are deeply disappointed by the end results of these negotiations," said youth delegate Crystel Hajjar.

"It is true the Kyoto Protocol survived, but we really need to question its effectiveness now that it only covers 15 per cent of the total global greenhouse gas emissions."

In an email to the Vancouver Observer, Hajjar criticized the refusal by major emitters like Canada to commit to reductions, which leaves a smaller group of dedicated signatories like the European Union see it through.

But it isn't just Canada taking the blame for a lack of action. While some see Kyoto's survival as a small success, others hold all global leaders accountable for failing to come to any real conclusions.

“This irresponsibly low ambition does nothing to solve to the climate crisis, simply delaying decisions onto time borrowed from our generation,” said national director Cameron Fenton in the Canadian Youth Climate Coalition’s final statement on negotiations.

Kumi Naidoo, Executive Director of Greenpeace International, had similarly negative remarks about the summit's outcomes. In a media release, he said that governments leaving Durban should be “ashamed” and that the failure of the negotiations would be measured in the lives of the poor and most vulnerable.

Keith Stewart, a Toronto-based climate and energy campaigner with Greenpeace Canada, also shared his thoughts on the semblance of progress at Durban.

“We have an agreement to keep talking, but we didn’t actually achieve any substantive progress on reducing emissions. All of those important decisions were delayed until at least next year,” said Stewart.

“It’s the equivalent of having the fire department outside of a burning building, and they’ve just agreed to come back in an hour and talk about whether or not to turn on the hoses. In the meantime, that leaves everybody else scrambling with a sort of bucket brigade to keep the fire from spreading, but it’s not the kind of response we need.”

While Canada promises to keep working with international partners on “fair, effective and comprehensive ways to address climate change”, organizations like the Climate Action Network maintain that it’s now in the hands of citizens and grassroots organizations to pick up the slack.

“Now more than ever we must create a coalition of the willing in Canada between people, cities and provinces that understand the urgent need for action,” said McKinnon in the organization’s closing statement.

“The moral imperative for action will not wait for political leaders to finally show leadership – and so we must fill that space with inspiring and meaningful action from the ground up.”