Activists converge on the offices of Apache Corp. to protest a natural gas pipeline linked to fracking operations in BC and Alberta. 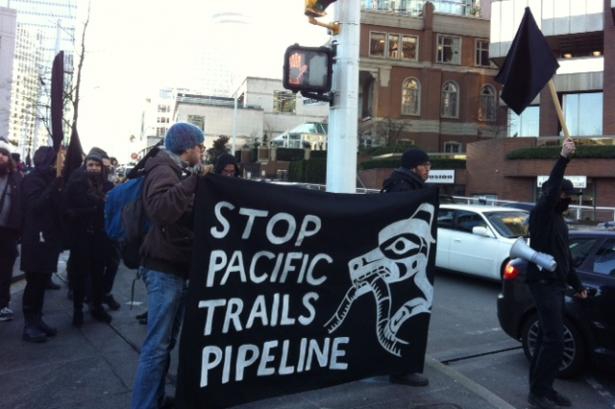 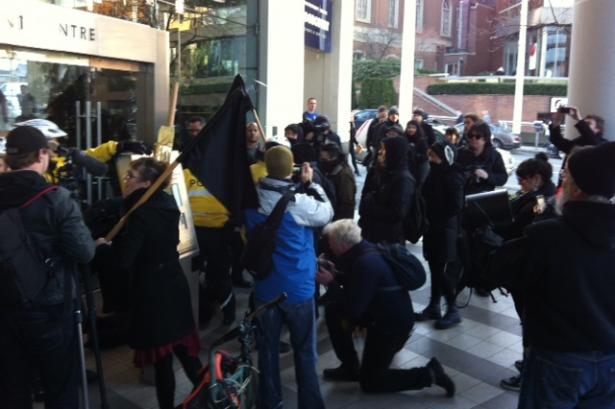 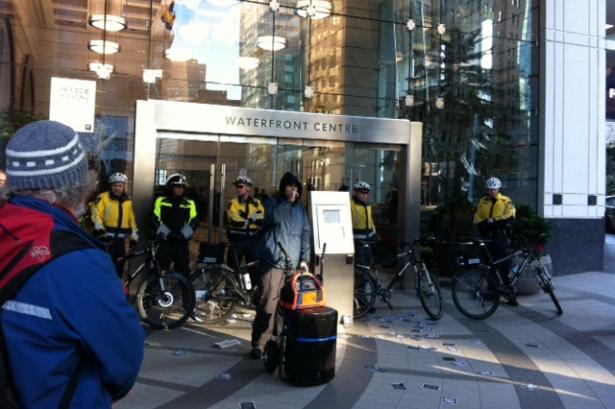 Protesters prepare to march after the demonstration outside the Waterfront Centre. Photos by Alexis Stoymenoff.

A group of 30 to 40 people gathered today for a demonstration at the entrance of the downtown Waterfront Centre, protesting the construction of the Pacific Trails natural gas pipeline in northern British Columbia.

The protest targeted the Houston-based Apache Corporation – a pipeline operator with a 40 per cent stake in the project – whose Vancouver offices are in the Waterfront building. Protesters moved in on the building shortly after noon, blasting Rage Against the Machine from an amplifier and shouting, “Pacific Trails is going to fail!”

The pipeline in question is intended to stretch over 450 kilometres across the province from Summit Lake to a port in Kitimat, carrying natural gas from shale deposits in northeastern BC and Alberta. This type of natural gas is extracted from underground rock through hydraulic fracturing (or “fracking”), which involves injecting water and chemicals at high pressures to allow the gas to escape.

“Fracking has become more well known in the last few years because of the dangers to the environment that it poses,” said Gordon, one of the speakers at today’s demonstration.

“Along with using vast amounts of water, they use very toxic chemicals that are polluting water supplies.”

Gordon made note of recent demonstrations at an affiliated Apache natural gas plant in Argentina, where indigenous Mapuche protesters caused disruptions citing serious concerns over water contamination. He also mentioned ongoing concerns around health and safety in communities like Dawson Creek, BC, where residents have reported health problems due to fracking and other natural gas operations.

If completed, the Pacific Trails project would allow gas from the interior to be transported to a liquid natural gas (LNG) facility in Kitimat, where it could be liquefied and shipped to Asian markets using tankers. Canada currently only operates one other LNG port, located in St. John, New Brunswick.

Oil and gas opposition across BC

Another hot topic at today’s demonstration was the proposed Northern Gateway pipeline from the tar sands to the northern BC coast. While Enbridge has faced intense opposition from First Nations over their oil sands project, a number of Aboriginal leaders from communities along the Pacific Trails route have already signed on to endorse the gas pipeline.

“Almost all the band councils along the proposed route have come out in opposition against the Enbridge pipeline and the Kinder Morgan pipeline," said Gordon, noting recent disagreements over a deal made by Gitxsan negotiators he referred to as "sell-outs".

The $1 billion Pacific Trails project has already been approved by the National Energy Board, with operations expected to begin in 2015. But there are a few key holdouts who remain strong in their refusal to allow oil and gas development on traditional territory.

Members of the Wet’suwet’en Nation, a major party in opposition to the Pacific Trails pipeline, recently created a roadblock to prevent machinery and pipeline workers from accessing their land.

“We’re all in solidarity with people not just fighting Apache but people fighting resource extraction on indigenous land,” said an organizer at today’s protest, going by the name of Frank.

“This is going to continue. This is just the first action, and with every action we’re going to escalate,” he said.

At one point during the demonstration, things seemed to be escalating already, as protesters attempting to enter the building were pushed and forcefully held back by police blocking the doorway. The lobby of the Waterfront Centre appeared to be on lockdown, with security gates drawn to keep protesters out.

After leaving the Waterfront Centre, the protest marched along W. Georgia Street and one man was reported to be arrested for breach of peace.

Representatives from the Apache Corporation have yet to respond to the Vancouver Observer’s requests for comment.